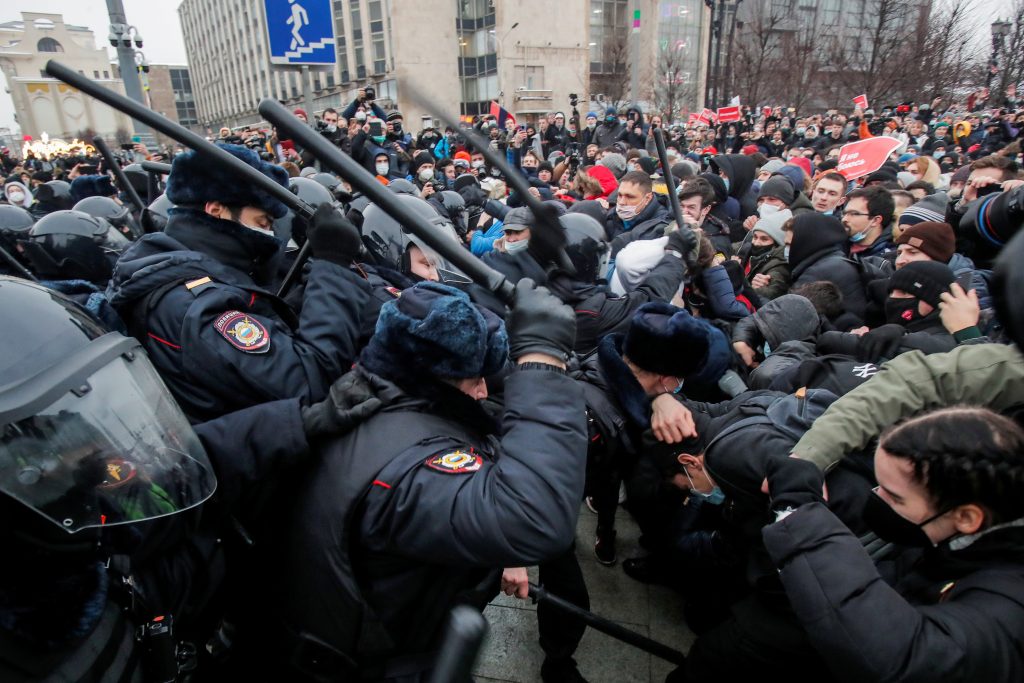 Is the enemy of your enemy always your friend? Ukrainians have had good reason to dwell on this ancient proverb in recent days following the outbreak of protests across Russia over the arrest of opposition leader Alexei Navalny.

At first glance, it might seem reasonable to assume Ukrainians would welcome the prospect of mounting domestic unrest in neighboring Russia. After all, Vladimir Putin’s hybrid war against Ukraine is about to enter its eighth year with no end in sight and with entire regions of the country still under Russian occupation. This gives Ukraine an excellent reason to favor anything that might distract or weaken the Kremlin.

The anti-corruption ideals and democratic principles championed by Navalny are also very much in line with the values Ukraine itself has been attempting to embrace ever since the country’s 2014 Euromaidan Revolution. If the current protest movement in Russia were to gain traction, it could theoretically pave the way for an eventual improvement in bilateral relations.

Nevertheless, many Ukrainians remain deeply skeptical about the man behind Russia’s recent wave of anti-Putin protests. Navalny has been a familiar face to Ukrainian audiences for more than a decade and has always provoked mixed emotions. While his investigations into Kremlin corruption have attracted considerable attention and admiration, he remains closely associated with Russian nationalism and stands accused of sharing Putin’s imperial pretensions towards Ukraine.

Speaking in 2014, Navalny notoriously stated that if he became president of Russia, he would not return Crimea to Ukraine as the occupied peninsula was “not a sandwich” to be handed back and forth. He has also echoed Putin in promoting the traditional Russian nationalist trope that Russians and Ukrainians are “one people,” despite acknowledging that such claims are considered highly offensive by many in Ukraine.

When Ukraine established a national Orthodox Church free from Russian control in December 2018, Navalny’s response proved particularly revealing. “What took centuries to create has been destroyed by Putin and his idiots in four years,” he tweeted. “Putin is the enemy of the Russian World.”

Here was Navalny the arch-nationalist on display. Instead of recognizing Ukraine’s right to Orthodox independence, he chose to attack Putin for failing to maintain Russian influence over the country, while at the same time endorsing the implicitly imperialistic idea of a “Russian World” stretching beyond the borders of modern Russia.

It is difficult to overstate quite how disqualifying this is for many Ukrainians. Since 2014, chauvinistic Russian notions of Ukraine’s place within a wider “Russian World” have served as the ideological fuel for a war that has claimed over 14,000 Ukrainian lives and displaced millions. The fact that Navalny felt comfortable aligning himself with this toxic concept speaks volumes about his attitudes towards Ukrainian independence and identity.

Navalny’s alarming foreign policy pronouncements are not restricted to Ukraine alone. He has declared his support for the independence of Kremlin-backed breakaway regions throughout the former USSR and cheered Russia’s 2008 war against Georgia. He has also previously used the kind of inflammatory anti-immigrant rhetoric that would place him firmly on the far right of the political spectrum in North America or Western Europe.

While much of this took place long ago, Navalny appears unrepentant. During a comparatively recent interview with the Guardian newspaper in 2017, he was repeatedly asked whether he had any regrets about the racially charged language and imagery he employed during the early years of his political career. His answer was a firm “no.”

Not everyone in Ukraine is viewing the current protests in Russia exclusively through the prism of Navalny’s unpalatable nationalism. Some regard his views on Ukraine as a regrettable but entirely unremarkable reflection of mainstream Russian public opinion, and prefer to emphasize the potential benefits for Ukraine of an increasingly vocal Russian pro-democracy movement. Others see the escalating confrontation over Navalny’s arrest as an opportunity to impose further international sanctions on Moscow and refocus attention on Putin’s Ukraine war.

In comments condemning Russia’s January 23 crackdown on protesters, Ukrainian Foreign Minister Dmytro Kuleba attempted to connect the international reaction to Navalny with a tougher response to the war in Ukraine. “As an international community, we need to go beyond condemnations and use all the available tools to make the Russian authorities stop violence against their own people and aggression against other states,” he tweeted.

The executive director of Ukraine’s Anti-Corruption Action Center, Daria Kaleniuk, has argued that the protests are in Ukraine’s national interests, regardless of Navalny’s personal attitudes towards the country. “My position is very pragmatic,” she explained in a social media post. “The more pressure there is on the Putin regime inside Russia, the greater the chances of returning Crimea to Ukraine. If Navalny at some point becomes a decision-maker in the Russian government, his policies regarding Crimea and the war in eastern Ukraine will then be the key markers for me.”

Ukrainians recognize that their disquiet over Navalny will have little impact on the international response to the imprisonment of the Russian opposition leader, but the domestic debate remains heated nonetheless. Some object to Navalny’s uncritical reception in the international media, while there has been understandable frustration over the attention lavished on him at a time when the ongoing Russian invasion of Ukraine appears largely forgotten. However, many in Kyiv also appreciate that the current wave of international outrage over Navalny could end up working in Ukraine’s favor.

Navalny is by no means the first Russian figure to be lauded by the democratic world while holding deeply undemocratic views on Ukraine. Russian literary legend Aleksandr Solzhenitsyn is another prominent example of this long and lamentable tradition. Solzhenitsyn famously won a Nobel Prize for his books exposing the horrors of Soviet Communism, but went on to become a bitter opponent of Ukrainian independence.

Such thinking reflects centuries of imperialism and russification. Thirty years after the collapse of the Soviet Union, this legacy continues to shape modern Russian attitudes towards twenty-first century Ukraine. For all his pro-Western posturing, Navalny is clearly not immune to these lingering imperial delusions. In that sense, he merely confirms the popular Ukrainian adage that Russian liberalism ends at the border with Ukraine.