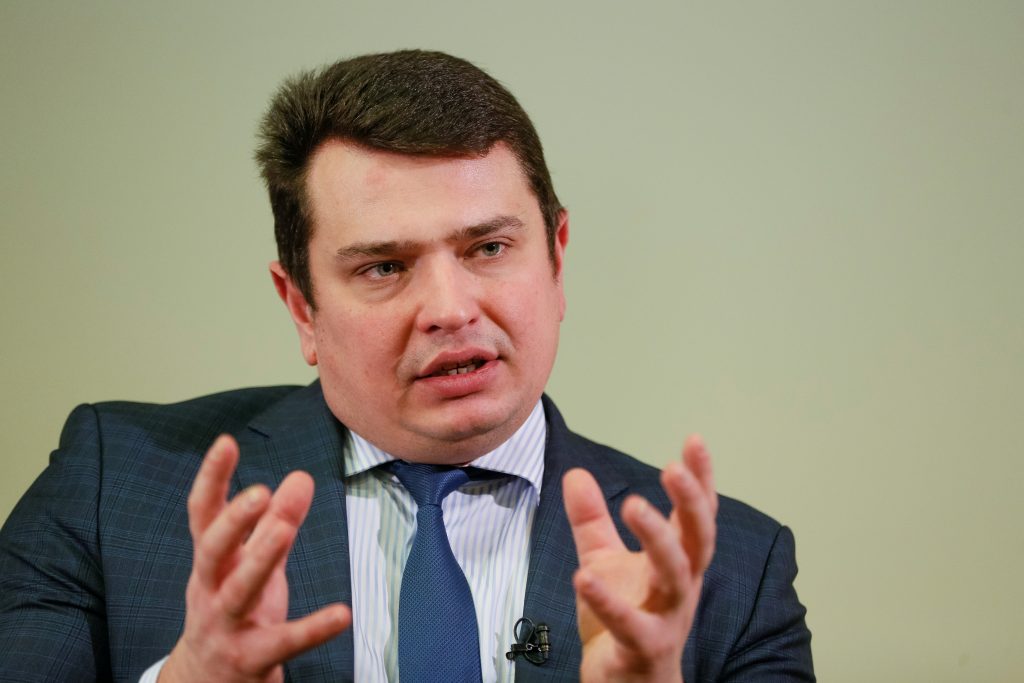 On August 28, Ukraine’s Constitutional Court declared the 2015 appointment of Artem Sytnyk as director of the country’s National Anti-Corruption Bureau (NABU) unconstitutional. The ruling, which was immediately dismissed as “politically motivated” by NABU officials, places the anti-corruption agency in legal limbo. Crucially, it is also throws Ukraine’s wider reform agenda into doubt. Anti-corruption activists fear the decision could now pave the way for a host of similar legal verdicts with the potential to undermine Ukraine’s Euro-Atlantic integration and reverse the progress made since the country’s 2014 Revolution of Dignity.

According to the recent Constitutional Court ruling, Ukraine’s then-president Petro Poroshenko exceeded his constitutional powers when he appointed Artem Sytnyk to lead NABU five years ago. This is technically correct and has long been public knowledge. Both Poroshenko and his successor Volodymyr Zelenskyy were well aware of the potential constitutional problems surrounding Sytnyk’s appointment, but neither they nor parliament chose to make the necessary amendments. Instead, it remained one of many legal issues casting a shadow over the work of NABU.

Prior to the Constitutional Court’s recent decision, Sytnyk had spent much of the previous five years fighting off attacks against NABU and attempts to establish political control over the institutionally independent bureau. He was aided in this task by strong support from many of Ukraine’s most significant international partners such as the IMF, the World Bank, and the European Union, who all championed NABU’s independence and linked it to their own continued cooperation with Ukraine. This high-level backing reflects the importance attached to NABU as a central pillar of the anti-corruption reforms adopted by Ukraine since 2014 in conjunction with the international community.

Following the September 2019 launch of Ukraine’s High Anti-Corruption Court, pressure on NABU intensified as the bureau began to demonstrate its potential as an anti-corruption body by bringing a series of senior officials to trial. More recently, this pressure grew further after it became clear that NABU had played a key role in helping the FBI to gather evidence against Ukrainian oligarch Ihor Kolomoiskiy, who is facing money-laundering charges in the US.

The late August Constitutional Court decision was a convenient way of undermining the independence of NABU while allowing both the president and parliament to avoid direct accusations of political interference. Nevertheless, the court’s decision now creates the grounds for amendments to existing legislation regulating NABU and could lead to the appointment of a more political reliable replacement as director.

President Zelenskyy is currently believed to be under considerable pressure to dismiss Syntyk, despite the fact that he does not constitutionally have the authority to do so. In line with the constitution, the correct way to proceed would be to have Sytnyk serve as interim director of NABU until the Ukrainian parliament is able to agree on a new procedure governing the selection process. MPs would be expected to adopt balanced new regulations governing the appointment procedure that guarantee fair and transparent competition with the participation of international experts.

At stake here is much more than the future of NABU itself or the private battles being waged by the bureau’s various political enemies. The Constitutional Court decision could serve as a dangerous precedent that opens the way for efforts to reverse many of the most important reforms Ukraine has implemented over the past six years. Recent examples of landmark reformist legislation that is now potentially at risk include the spring 2020 law on the sale of agricultural land and the so-called “Anti-Kolomoiskiy” Banking Law that was passed to prevent the oligarch from regaining ownership of his nationalized bank PrivatBank.

These two pieces of legislation were requirements in order to secure a new IMF program for Ukraine. They are now both being challenged in court as part of a wider campaign to undermine Ukraine’s reform agenda. In July and August 2020 alone, the Constitutional Court opened five separate proceedings aimed at various aspects of Ukrainian anti-corruption legislation. The majority of these proceedings were initiated by members of parliament who either belong to pro-Kremlin parties or are regarded as being under Kolomoiskiy’s control.

This campaign of lawfare now threatens to reverse the limited reform progress made by Ukraine since the country’s 2014 revolution. It is being waged by oligarchs who wish for a return to the impunity of old, together with pro-Kremlin political forces eager to derail Ukraine’s westwards momentum and return the country to the Russian sphere of influence. For their own reasons, both parties seek to discredit Ukraine in the eyes of Kyiv’s international partners and bring the post-2014 era of Euro-Atlantic integration to an end. The success of this unholy alliance depends largely on the continued corruption of Ukraine’s courts.

The present situation is an uncomfortable reminder that Ukraine’s judicial system remains the weakest link in the country’s reform efforts. Until there is genuine rule of law in Ukraine, individual steps in the right direction such as the 2015 establishment of NABU will remain hostage to a flawed court system that prevents the country from ever reaching the point of no return in its European ambitions. The defense of NABU’s independence is now the immediate priority for supporters of reform, but the long-term emphasis must remain firmly on the complete transformation of the Ukrainian justice system.