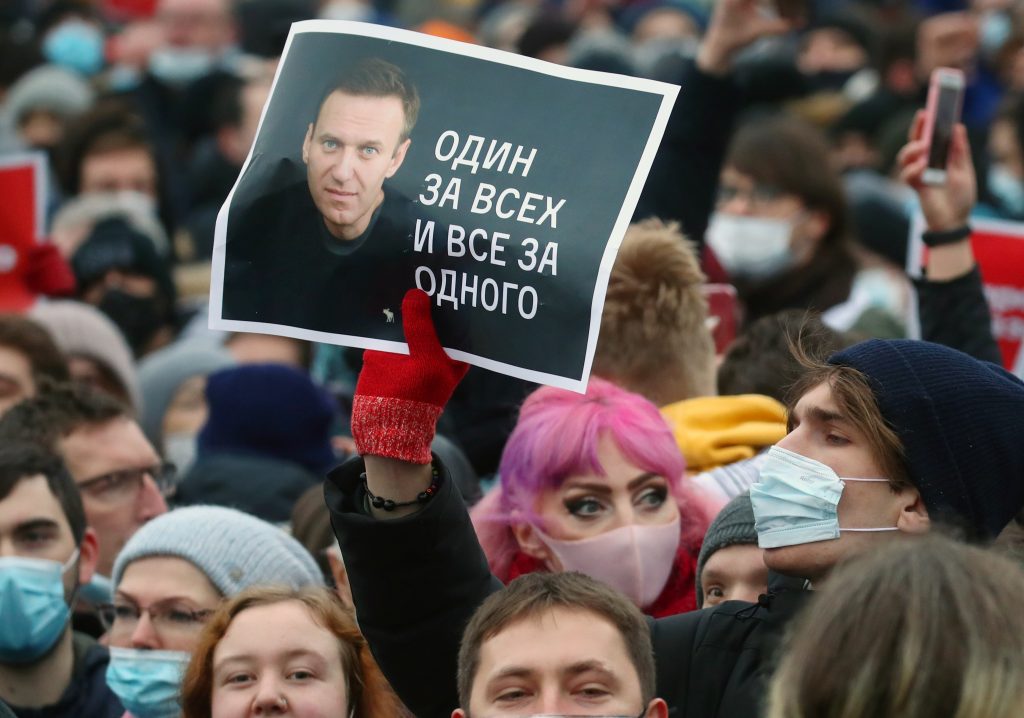 As tens of thousands of Russians took to the streets in scores of cities across eleven time zones on January 23 to protest the jailing of opposition leader Alexei Navalny, many of them also had Belarus on their minds.

The trend also extended to the online world. In a series of TikTok videos widely shared on social media, young Russian men donned police uniforms and ripped off their badges to assail police brutality during the protests, mimicking a form of political performance art that young Belarusians have been deploying for months.

The synergy between anti-government protesters in Russia and Belarus that was on display this past weekend is not new. When demonstrations in Khabarovsk in the Russian Far East broke out this summer over the arrest of a popular governor, protestors there also expressed their solidarity with those seeking to oust Lukashenka by chanting “Belarus We Are With You!” Protesters in Belarus returned the favor, chanting “From Khabarovsk to Minsk, dictatorship has no place.”

Navalny’s supporters, meanwhile, say they have been closely studying the developments in Belarus since mass protests broke out in August, hoping to draw lessons for their own battle against the regime of Vladimir Putin. And since Navalny’s return to Russia and subsequent arrest, Belarusian opposition leader Sviatlana Tsikhanouskaya has suggested she may also return home from her own exile in Vilnius.

Ilya Zaslavskiy, a senior fellow at the Free Russia Foundation, told me that the uprising in Belarus has inspired the Russian opposition by “showing that a country can erupt on a huge scale after being dormant for 25 years even under the most oppressive regime.”

But the solidarity and synergy between the Russian and Belarusian protesters is about much more than the contagion effects of political and social change in two neighboring former Soviet states.

The simultaneous unrest in both countries also severely limits Russia’s ability to control the outcome of the crisis in Belarus, a country the Kremlin has long viewed as a satellite state and client. Additionally, it tightly binds the fates of Putin and Lukashenka, two men who have been in power for 21 and 26 years respectively and who are widely believed to detest one another.

Like it or not, Putin and Lukashenka are now stuck with each other. “Putin will begin growing Lukashenka’s mustache,” political commentator Vladimir Pastukhov playfully wrote in a recent column for MBK Media. Just like Lukashenka, Putin will now also be forced to “assume a defensive position” in the face of public discontent and unrest with his “room to maneuver narrowed sharply.”

According to leaks to the Russian media, Putin regime had been hoping to use the mass protests and disputed election in Belarus as a vehicle to tighten Moscow’s grip on its western neighbor and replace Lukashenka with a more pliant figure. But with the mass Russia-wide protests over Navalny’s imprisonment that broke out on January 23, and with more planned for the near future, such a move would set a dangerous precedent for the Kremlin. The last thing Putin needs at this point is the example of a dictator ousted by a popular uprising.

The simultaneous protests in Belarus and Russia have also limited Lukashenka’s options. Whereas in the past, the Belarusian strongman would periodically make overtures to the West to maximize his leverage with Moscow, that avenue is now closed to him.

Andrey Zaostrovtsev, an economics professor at the European University of St. Petersburg, told Radio Free Europe/Radio Liberty that due to Lukashenka’s tight embrace of Putin since August, he has turned his country into a “semi subject of the Russian Federation.” And for Russia, Lukashenka has become “a kind of Western version of [Chechen strongman] Ramzan Kadyrov,” a problematic and irritating client that cannot be removed without risk.

The current situation is reminiscent of the 2013-14 Euromaidan uprising in Ukraine, which ousted the country’s authoritarian pro-Moscow president Viktor Yanukovych. The Russian opposition initially drew inspiration from their Ukrainian counterparts. “By supporting Ukraine, we also support ourselves,” the late Russian opposition leader Boris Nemtsov, who was assassinated in Moscow in February 2015, said during the uprising in Kyiv.

The solidarity between the Russian and Ukrainian street was, of course, broken by Moscow’s forceful annexation of Crimea and the war in the Donbas, which temporarily consolidated Russian society and marginalized the opposition. But according to Pastukhov, the chances of successfully repeating a Crimea-type scenario in Belarus is “near zero”

Russian opposition figure Vladimir Kara-Murza, chairman of the Boris Nemtsov Foundation, recently told Public Radio International that he has “feelings of awe, admiration, and respect for those amazingly courageous people of Belarus, who continue to come out to protest in the face of unthinkable violence and repression, even by the standards of the Lukashenka regime.”

Kara-Murza added that “the reason Putin is so afraid of what’s happening in Belarus is because, for him, this is a glimpse into his own future. Putin and Lukashenka are the last two dictators in Europe.”

Image: A man holds a portrait of jailed Russian opposition leader Alexei Navalny during a January 23 protest in Moscow. (Valery Sharifulin/TASS via REUTERS)