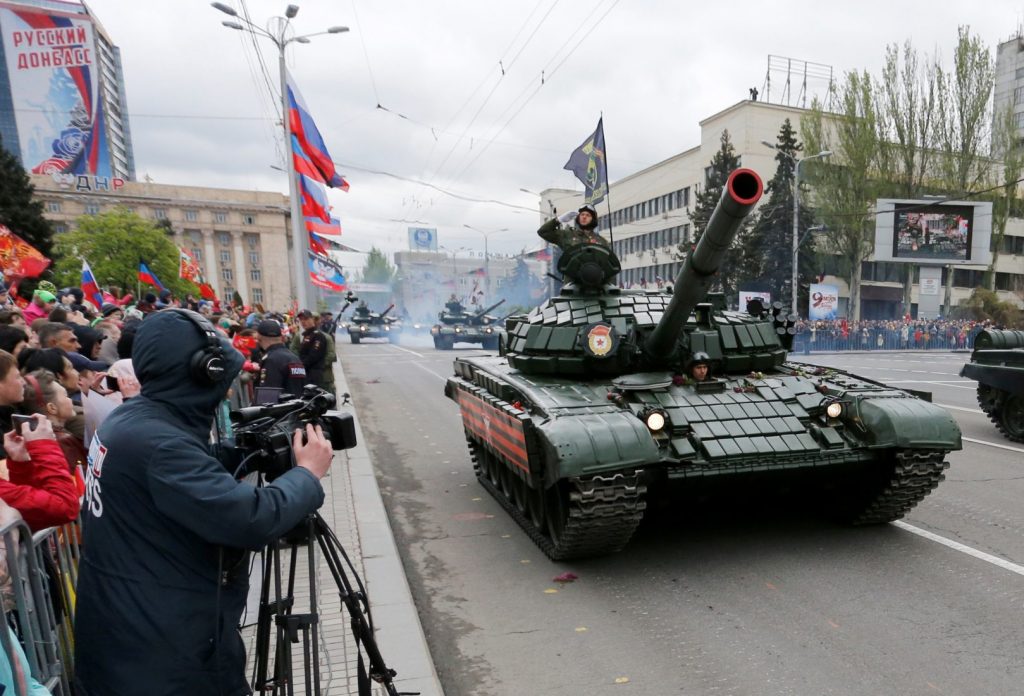 The European Union has this week warned that Russia is seeking to “de facto integrate” the Kremlin-controlled separatist republics of eastern Ukraine. The EU raised the alarm in a document sent to member states, Bloomberg reported on May 12.

The European Union highlighted a number of specific steps taken by the Kremlin in eastern Ukraine, such as the holding of illegitimate elections and distribution of Russian passports to local Ukrainian citizens. Taken together, these measures are “aimed at the de facto integration of Ukraine’s non-government controlled areas into Russia.” The EU’s External Action Service is now expected to produce a more detailed report on the topic.

The EU’s comments are a timely reminder that despite relief over Russian promises to reduce its recent troop buildup on the Ukrainian border, Putin’s seven-year war against Ukraine is far from over. Indeed, while the threat of a new Russian offensive appears to have receded somewhat since mid-April, the Kremlin shows no signs of retreating from Crimea or the Russian-occupied regions of eastern Ukraine. On the contrary, Moscow is taking steps to extend this occupation indefinitely.

The Russian attack on Ukraine began in February 2014, when Russian troops without insignia launched the lightning takeover of Ukraine’s Crimean peninsula. Encouraged by the largely toothless international response to his Crimean triumph, Putin then expanded the campaign to mainland Ukraine, with Kremlin agents attempting to orchestrate a series of pro-Russian uprisings throughout the south and east of the country.

Moscow expected to receive a warm welcome from the predominantly Russian-speaking local populations of these regions, but it soon became clear that Putin had gravely underestimated the strength of Ukrainian national feeling. Within the space of a few decisive weeks in spring 2014, Russian hopes of partitioning Ukraine and establishing “Novorossiya” (“New Russia”) as a Kremlin puppet state were thwarted by overwhelming public opposition in key Ukrainian cities such as Odesa, Dnipro, and Kharkiv.

As the Kremlin’s plans began to unravel, Russia found itself restricted to a relatively small foothold in eastern Ukraine’s Donbas region and confronted by thousands of Ukrainian volunteers who had taken up arms to help the ramshackle Ukrainian Armed Forces defend the country. By late 2014, this makeshift military force had enabled Ukraine stem the tide of Russian advances, leading to a stalemate situation along a 400km front line that has remained largely unchanged for the past seven years.

Officially, Russia denies being a party to the conflict. However, the evidence of Russian involvement is overwhelming and has led to the imposition of international sanctions by the European Union, the US, Canada, the UK, and a host of other nations.

The most flagrant of these measures has been the distribution of Russian passports. Putin first unveiled plans to begin issuing Russian passports in occupied eastern Ukraine two years ago in the immediate aftermath of Volodymyr Zelenskyy’s election as President of Ukraine. Last month, Kremlin officials confirmed that over 500,000 Ukrainian citizens in occupied eastern Ukraine have received Russian citizenship since the scheme was launched in April 2019.

The transformation of eastern Ukraine’s separatist republics into Russian passport protectorates provides the Kremlin with an open-ended invitation to intervene and dramatically reduces the chances of their successful reintegration into Ukraine. This was underlined during the recent bout of Russian saber-rattling on the Ukrainian border. Speaking in Moscow on April 8, President Putin’s deputy chief of staff Dmitry Kozak warned that Russia “would be forced to come to the defense” of Russian citizens in eastern Ukraine if fighting escalated.

While this week’s European Union warning over Russia’s “de facto integration” of occupied eastern Ukraine is certainly welcome, a Crimean-style annexation remains relatively unlikely. Any such undertaking would be expensive, unpopular, and unnecessary.

The occupation of Crimea already represents a huge financial burden for the Kremlin. Occupied eastern Ukraine, with its large pension-age population and dilapidated industrial infrastructure, represents a potentially even costlier proposition. At present, Moscow heavily subsidizes the Donbas but has managed to balance this by ruthlessly plundering the region’s industrial and natural resources. Any attempt to make the relationship official would mean a significant increase in the Kremlin’s financial obligations at a time when the Russian economy is mired in a prolonged period of stagnation.

There are also good reasons to doubt the propaganda value of an annexation. The mud-and-vodka Donbas rust belt does not carry the same mystique as exotic Crimea, and cannot hope to stir the Russian public’s imagination in anything like the same manner. Whereas well over 80% of Russians continue to support the annexation of Crimea, a recent poll found that just 25% backed the incorporation of the Donbas into the Russian Federation.

Instead of opting for annexation, Putin will continue to use the Donbas as a pawn in his war against Ukraine. Control over occupied eastern Ukraine allows the Kremlin to dial up the simmering conflict whenever convenient, while at the same time demanding concessions from Kyiv. This keeps Ukraine destabilized and unable to make meaningful progress towards greater Euro-Atlantic integration. It also postpones the day when Putin will finally have to acknowledge the loss of Ukraine and the end of an era in Russian imperial history.

EU leaders need to recognize that Russia has no intention of making peace with Ukraine. The Kremlin’s efforts to promote the “de facto integration” of the Donbas into the Russian Federation are not a precursor to annexation; they are part of a strategy to deny Ukraine sovereignty over its own territory and maintain the current climate of instability indefinitely. Until the West confronts this reality, Putin’s Ukraine War will remain a source of international tension and a threat to global security.