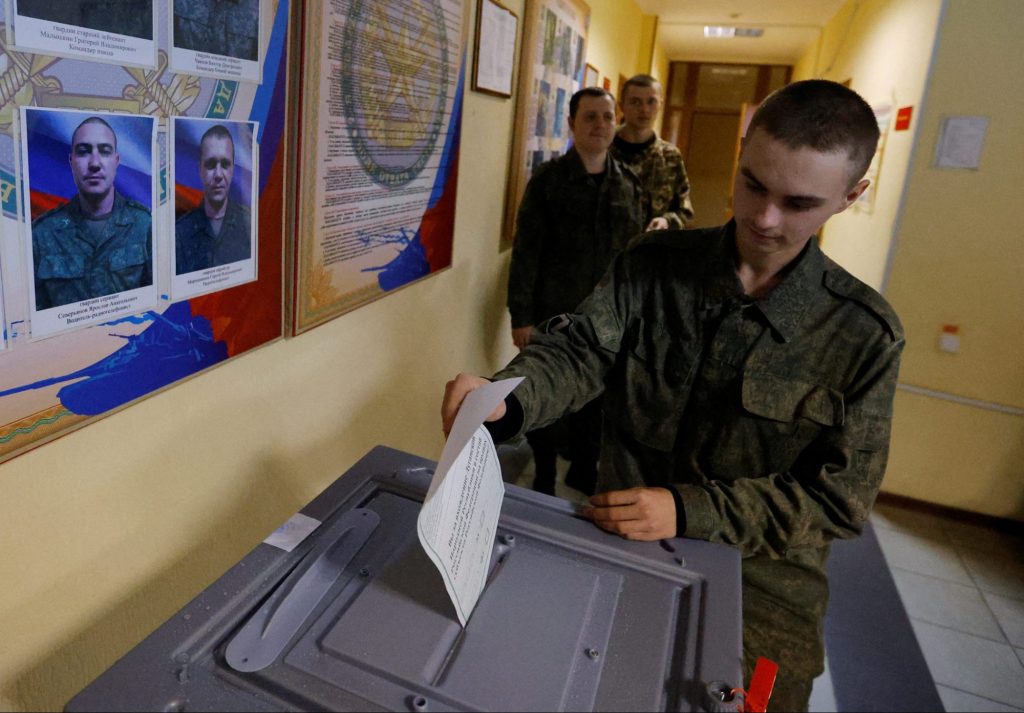 According to the Kremlin, millions of Ukrainian civilians who have been subjected to seven months of brutal Russian occupation just voted overwhelmingly to join their oppressors. This claim is self-evidently absurd and grotesque, but that did not prevent multiple international media outlets from reporting on Russia’s sham referendums in a matter-of-fact manner that risked lending a veneer of legitimacy to Vladimir Putin’s ongoing war of imperial aggression.

There was also considerable confusion in the international press over exactly who was behind these bogus votes. The world’s oldest news agency, Agence France-Presse (AFP), referred to Russia’s occupation administrations in Ukraine as “Pro-Moscow authorities,” while Germany’s DW attributed the ballots to “separatists in Ukraine.” Such terminology implies a locally-driven conflict and absolves Russia of responsibility for what remains Europe’s most unambiguous act of international aggression since the days of Hitler and Stalin.

Unsurprisingly, this troubling coverage of Russia’s sham referendums sparked an online backlash. To their credit, some of the worst offenders deleted the posts in question and edited headlines in order to more accurately reflect the reality of the situation. However, the damage had already been done. Millions of people around the world had been exposed to deeply misleading reports from trusted news sources that reinforced Russian disinformation and endowed Putin’s fake ballots with a credibility they did not deserve.

This is not a new problem. From the very beginning of the Russian attack on Ukraine in spring 2014 until the full-scale invasion of February 2022, Moscow consistently sought to disguise its involvement by portraying the unfolding hostilities as a fight between the Ukrainian authorities and homegrown separatist movements. The international media often served as invaluable if unwitting accomplices in these efforts, with many of the world’s most prominent outlets choosing to prioritize impartiality over accuracy in their coverage of the conflict.

In practice, this typically meant giving equal weight to Russian denials despite overwhelming evidence that Moscow was simply lying. For example, nobody seriously questioned the fact that the “Little Green Men” who seized Crimea in early 2014 were in fact Russian soldiers, but most media coverage of the armed takeover stopped short of explicitly saying so. Likewise, while Russia’s subsequent military intervention in eastern Ukraine was widely recognized as the world’s worst-kept secret, international news reports frequently presented the ensuing conflict in ambiguous terms that suggested the extent of Russia’s participation was genuinely in doubt.

Securing Kremlin-friendly coverage from international correspondents has long been a key goal of Russia’s disinformation strategy. In an October 2021 interview, Russian MP Alexander Borodai spelled out Moscow’s efforts to manipulate the international media. Borodai is no ordinary Russian parliamentarian. Prior to entering the Duma via Russia’s September 2021 parliamentary elections as a representative of Vladimir Putin’s United Russia party, Borodai was best known for having served in summer 2014 as prime minister of the so-called Donetsk People’s Republic (DPR), the separatist republic created by the Kremlin in eastern Ukraine.

Asked why he left his post in Donetsk so abruptly in August 2014, Borodai explained that his exit was deemed necessary in order to hoodwink the international media regarding Russia’s role in the war. “At that time, the leadership of the Donetsk People’s Republic was a strange spectacle,” he recalled. “I am from Moscow. My first deputy was from Moscow. The power ministries were all controlled by Muscovites, and defense minister Igor Strelkov (Igor Girkin) was also from Moscow. It was a little too blatant from a propaganda perspective. There was no propaganda issue with domestic audiences in Russia, but the situation in the international information space was more difficult in this context. It was clear that it would be necessary to identify new leaders from among the local [Ukrainian] population.”

The world’s media has moved on considerably since 2014 and the early days of Russia’s attack on Ukraine. Indeed, the shock of this year’s full-scale invasion has brought much-needed clarity to coverage of the conflict and has led to a sharp decline in the number of outlets ready to unquestioningly quote the Kremlin as a credible source. It is also important to acknowledge that much of the reporting coming out of Ukraine since February has been truly world class, with courageous journalists bringing the unvarnished reality of the war to international audiences, often at great personal risk. Tragically, a number of correspondents have been killed in the line of duty.

While the bravery and professionalism of individual journalists reporting from Ukraine is not in question, the problematic portrayal of Russia’s recent fake referendums by much of the international media is a reminder that serious issues do remain. It is obviously farcical to employ the language of democracy when reporting on ballots conducted at gunpoint, much as it is obscene to imply that people under military occupation are able to express themselves freely. Errors of this magnitude reflect the continued success of Russian efforts to disguise the true nature of the war.

For more than eight years, disinformation has been at the heart of Russia’s attack on Ukraine. Putin lied about Russian soldiers in Crimea and eastern Ukraine; he lied about preparations for a full-scale invasion; and he lied about plans to annex Ukrainian territory. In reality, it is now painfully clear that Russia is waging an old-fashioned war of imperial expansion and intends to extinguish Ukrainian statehood altogether. International media outlets that allow Russian narratives to go unchallenged are putting themselves at risk of becoming inadvertent accomplices in this criminal agenda.

Many in the West believe the fall of Vladimir Putin would pave the way for an even more extreme successor in Moscow but post-Putin Russia may actually reject the anti-Western policies of today’s Kremlin.

Image: Russian servicemen participate in a so-called referendum organized by the Kremlin in occupied eastern Ukraine ahead of planned annexation. (REUTERS/Alexander Ermochenko)