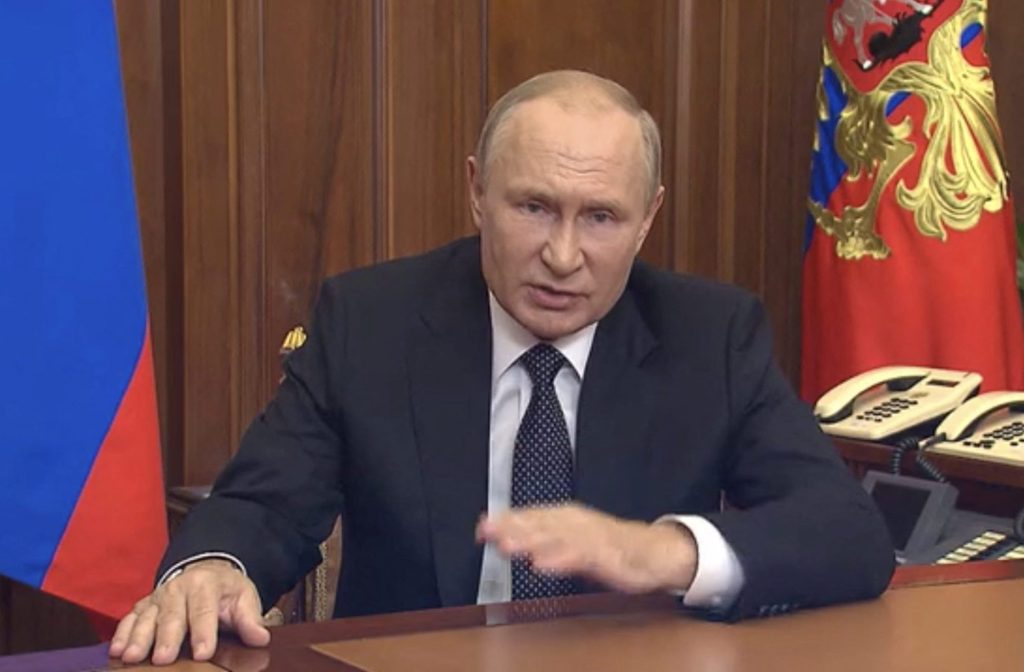 Russian President Vladimir Putin presented the international community with a nuclear ultimatum on September 21 as he dramatically raised the stakes in his faltering Ukraine invasion. In a rare address to the nation, Putin made clear that he plans to annex large swathes of Ukraine in the coming week and is prepared to use nuclear weapons to defend his gains. “If the territorial integrity of our country is threatened, we will without doubt use all available means to protect Russia and our people. This is not a bluff,” he warned.

Putin’s comments follow on from the September 20 announcement that snap referendums on joining the Russian Federation will take place in the four regions of Ukraine currently under partial Russian occupation. Voting is scheduled to begin on Friday in eastern Ukraine’s Donetsk and Luhansk regions and southern Ukraine’s Zaporizhzhia and Kherson regions.

The outcome of these referendums is not in any doubt. Indeed, most observers assume the results have already been determined in advance by the Kremlin. Once landslide “yes” votes are inevitably confirmed, the occupied regions of Ukraine will be officially annexed and incorporated into the Russian Federation. Moscow is then expected declare that any further Ukrainian military action will be regarded as an attack on Russia itself, hence Putin’s threat of a nuclear response.

The Russian ruler is betting that the possibility of a nuclear escalation will persuade Western leaders to stop arming Ukraine and convince them instead to pressure Kyiv into accepting a negotiated settlement that would leave around 20% of Ukrainian land under Russian control. Putin’s readiness to engage in such direct nuclear extortion is a sign of his mounting desperation as the invasion of Ukraine continues to unravel.

When Putin launched his invasion on February 24, most Russians anticipated a short and victorious campaign that would bring the era of Ukrainian independence to an end and force the country firmly back into the Kremlin orbit. This proved to be a disastrous miscalculation.

Far from welcoming invading Russian soldiers as liberators, the Ukrainian nation united against a common enemy and rose up in resistance. Russian troops were defeated outside Kyiv and forced to retreat from northern Ukraine. They were fought to a standstill in the south and the east. Worst of all, Putin’s army was completely routed in northeastern Ukraine in early September and fled the region in disarray.

Almost seven months since the invasion of Ukraine began, it is becoming increasingly obvious that Russia is heading toward what would be one of the most humiliating military defeats in the country’s history. Things are looking so grim for the Kremlin that international observers have begun to debate whether the Putin regime or the Russian Federation itself can survive such a debacle.

The Russian army has suffered catastrophic losses in Ukraine. Tens of thousands of Russian soldiers have been killed, while more than 1000 tanks have been captured or destroyed. Unsurprisingly, Putin’s invasion force is deeply demoralized, with reports growing of mass resignations and desertions. Tellingly, mobilization measures announced in parallel to Putin’s nuclear ultimatum also extended current military service contracts indefinitely while increasing penalties for soldiers who refuse to fight.

As Russia’s fortunes in Ukraine go from bad to worse, the Kremlin’s broader international position is also collapsing. The Western world has imposed unprecedented sanctions in response to the invasion and finally seems to have reached the conclusion that it must end years of growing energy dependence on Moscow. Russian troops are under investigation for war crimes and Putin himself is increasingly seen as an international pariah.

Closer to home, Moscow’s influence in the post-Soviet region is visibly receding on an almost daily basis. Kazakhstan has publicly split with Russia and recently signaled that it now sees China as its key partner. In the South Caucasus, Azerbaijan has renewed hostilities with Armenia in open defiance of Russia’s peacekeeping role. On Russia’s western borders, Finland and Sweden are poised to join NATO and the Baltic states have imposed visa bans on Russian citizens. Even Belarus dictator Alyaksandr Lukashenka, who is almost entirely dependent on the Kremlin for his political survival, has resisted relentless Russian pressure to join the invasion.

As things currently stand, the Russian invasion of Ukraine may well be the biggest geopolitical blunder of the twenty-first century. The gravity of the situation can no longer be denied and now appears to have finally penetrated Putin’s personal information bubble of courtiers and sycophants. After months of insisting that everything was going “according to plan,” the Russian dictator has been forced to acknowledge that drastic measures are required in order to avert disaster.

Putin insists his threat to use nuclear weapons is not a bluff. There is no way of knowing in advance whether this is true or not. Despite this uncertainty, it is crystal clear that the international community simply cannot allow itself to be intimidated in this manner.

If the West were to respond to Putin’s nuclear saber-rattling by abandoning Ukraine, it would have devastating consequences for international security and the entire concept of nuclear nonproliferation would be consigned to the dustbin of history. Instead, we would enter a dangerous new era of chronic instability marked by nuclear blackmail and wars of aggression. The only way to avoid this fate is by confronting Putin before it’s too late.

In the coming days, the West must send an unambiguous message to Moscow that nuclear weapons are not acceptable bargaining tools. They must spell out the crushing costs Russia will face if it dares to cross the nuclear red line, and they must convince the Kremlin that they are most certainly not bluffing. Now is also the time to emphasize that support for Ukrainian statehood is non-negotiable by ramping up weapons supplies.

Putin knows he is heading toward disaster in Ukraine but is hoping the West’s collective fear of a nuclear apocalypse will allow him to snatch victory from the jaws of defeat. Despite the setbacks of the past seven months, he remains convinced that the democratic world is weak at heart and will ultimately back down. If Western leaders do not stand up to him now, they will regret it for decades to come.