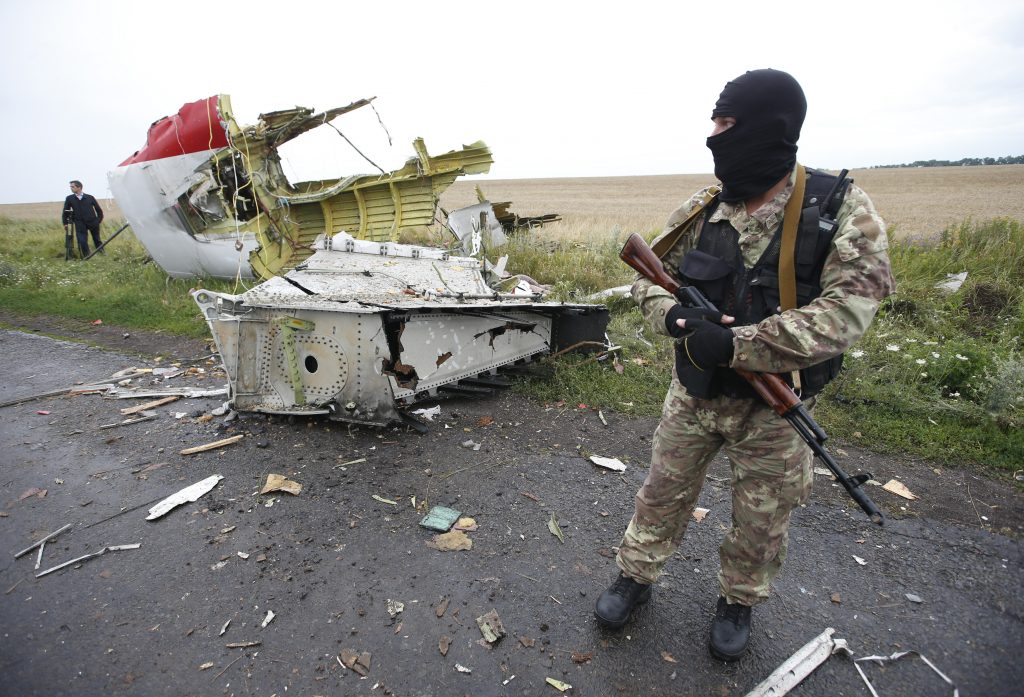 298 people lost their lives in summer 2014 when Malaysia Airlines flight MH17 was shot down over eastern Ukraine. At the time, the region was the scene of heavy fighting between Russian-backed forces and the Ukrainian military. In the immediate aftermath of the shoot down, the Russian reaction was telling. Kremlin media outlets, which were operating in close cooperation with Russian forces in eastern Ukraine, initially misreported the MH17 tragedy as the latest in a series of successful anti-aircraft attacks on Ukrainian military aviation. Meanwhile, a gloating post appeared on the social media account of Igor Girkin, a shadowy Russian figure who had become the poster boy of Putin’s war in Ukraine. “We did warn you – do not fly in our sky,” it read.

These revealing responses were to prove the first elements in a long chain of evidence linking Russia to the MH17 attack. In the weeks following the tragedy, most observers concluded that Moscow was to blame. This led to the introduction of tough new international sanctions against the Kremlin. Over the intervening six years, the evidence has continued to mount up as investigators have slowly but surely pieced together information about the attack itself and uncovered further details of Russia’s role in providing the sophisticated anti-aircraft system that delivered the missile.

The quest for MH17 justice entered a new phase this year. In March 2020, a trial began in the Netherlands of three Russians (including Girkin) and one Ukrainian accused of direct involvement in the attack. More recently, the Dutch government announced on July 10 that it is taking Russia to the European Court of Human Rights. Dutch officials say they hope to achieve “truth, justice and accountability” for MH17 victims.

The slow pace of progress towards justice has been particularly painful for the hundreds of families who lost loved ones on flight MH17. This pain has been significantly heightened by Russia’s six-year campaign of denials and disinformation. Moscow’s efforts to deflect blame for the tragedy have often verged on the absurd, including everything from fake satellite evidence to alleged eye-witnesses who claim to have identified Ukrainian fighter jets in the vicinity of flight MH17 at the time of the attack.

The Kremlin’s many implausible conspiracy theories have achieved little other than inflicting further damage on Russia’s already tarnished reputation. Nevertheless, Moscow’s refusal to publicly admit responsibility for the tragedy has prolonged the suffering of victim families and prevented them from achieving a degree of closure.

To mark the sixth anniversary of the MH17 tragedy, the Atlantic Council recently hosted a discussion on the investigation into the attack and the ongoing efforts to bring Russia to justice. Ambassador John Herbst was joined by an expert panel featuring Bellingcat investigator Christo Grozev, former Ukrainian Deputy Foreign Minister Olena Zerkal, and global affairs analyst Michael Bociurkiw, who was a key member of the OSCE monitoring mission in eastern Ukraine at the time of the 2014 attack.

One of the focuses of the discussion was the immense human toll of the tragedy. Bociurkiw noted how the names of all 298 MH17 victims were recited at the start of the trial when it began earlier this year. “It took 18 minutes to read those names,” he commented. Bociurkiw also recounted the story of Sameera Taylor, who lost two sons on the flight and says she now lives with a permanent “hole in [her] heart.” The Netherlands was home to the majority of the victims and the grief caused by MH17 was felt across the entire nation. “There’s hardly anyone in the Netherlands who hasn’t been touched by this tragedy,” explained Bociurkiw.

Open source investigators at Bellingcat have often led the way in the race to uncover evidence of Russia’s role in MH17, with the group publishing numerous groundbreaking reports long before legal proceedings began to make similar progress. Bellingcat’s Christo Grozev explained that this reflected the complex challenges prosecutors faced as they sought to build a legally bulletproof case that would result in courtroom convictions.

Grozev also explained that the MH17 investigation was “by far the most difficult” he had witnessed in his journalistic career. The investigation was conducted in hostile territory with the prime suspects controlling the crime scene and obstructing investigators at every turn. He underlined the complexities of trying to interview witnesses who were vulnerable to threats and intimidation from the Russian security services. Understandably, the witnesses that will be taking the stand in the Netherlands will be doing so anonymously to protect their identities. Considering all the obstacles in the way of international investigators, “six years is not really a long stretch of time,” in Grozev’s opinion.

International cooperation between the Netherlands and Ukraine was instrumental in reducing the barriers faced by investigative teams. Olena Zerkal recalled how both Ukraine and the Netherlands had to introduce changes to national legislation in order to best facilitate the progress of the investigation. Despite Kremlin efforts to discredit and obstruct the work of international investigators, “teamwork … did not allow Russia to escape responsibility,” commented Zerkal.

After years of investigation, the MH17 trial in the Netherlands seeks to indict those responsible and hold them to account.

The geopolitical implications of the MH17 tragedy expand far beyond the current investigation. Grozev explained why he believes the Kremlin policy of blanket denials will ultimately have a lasting negative impact on Russian society. While Kremlin influence over the mainstream Russian media currently allows Moscow to control the narrative surrounding MH17, evidence that will be revealed during court proceedings in the Netherlands over the coming months will inevitably penetrate Russian society.

As more and more facts about MH17 enter the public domain, Moscow’s version of events will become increasingly untenable. According to Grozev, it is hard to imagine Russian audiences in ten years time still believing the dozens of different MH17 conspiracy theories currently being promoted by the Kremlin. “People will get the facts. They will hear witnesses. They will see satellite photos.” This will spark waves of public anger within Russia, he predicts.

As well as losing credibility both at home and abroad, the Kremlin can also expect to incur further costs. Grozev says this will likely include additional international sanctions once the current court case is completed, as well as considerable sums that will have to be paid to victim families in the many civil cases Russia will face. New charges against more senior Russian officials are also a distinct possibility as investigators pursue the chain of command in order to hold those who gave the fateful orders accountable. Ultimately, this could lead to the very top of the Russian military and Vladimir Putin himself as the country’s commander-in-chief.

So far, Russia has dismissed the legal proceedings against the country as illegitimate and politically driven. It is safe to assume that this will remain Moscow’s position. Nevertheless, the court hearings currently underway in the Netherlands, along with the Dutch case against the Kremlin at the European Court of Human Rights, promise to expose Russian responsibility for the MH17 attack in painstaking and irrefutable detail. With each fresh revelation, Moscow’s complex web of MH17 lies will continue to unravel.

Image: A member of the Kremlin's hybrid forces in eastern Ukraine guards the wreckage of flight MH17 in July 2014. Despite overwhelming evidence, Russia continues to deny responsibility for the attack on the civilian airliner, but new court proceedings offer fresh hopes for belated justice. REUTERS/Maxim Zmeyev