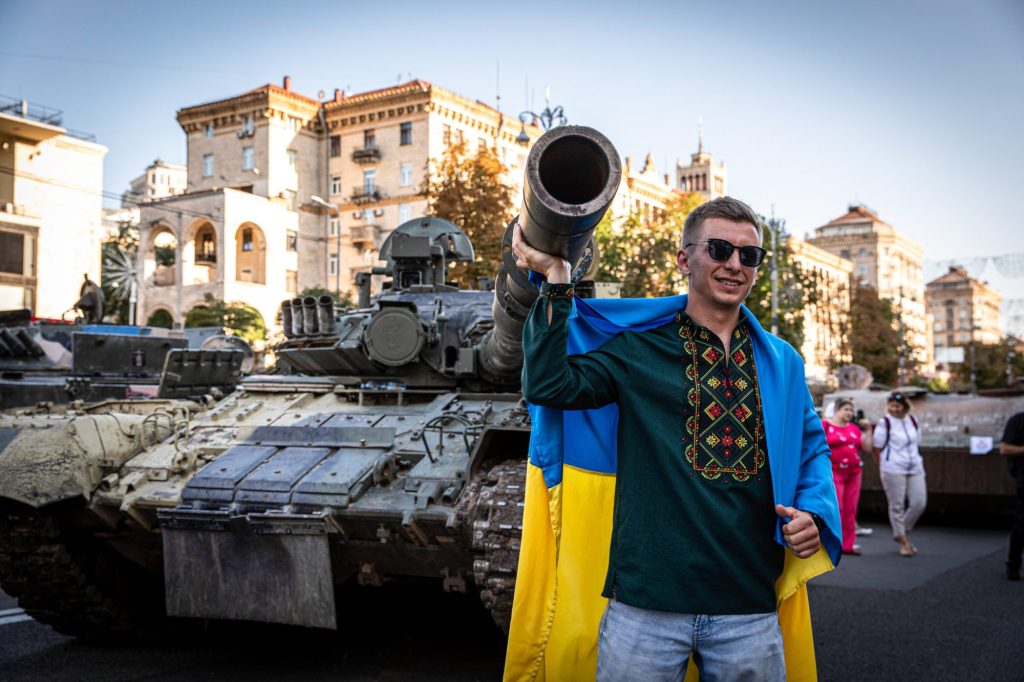 Russia’s genocidal invasion of Ukraine was meant to extinguish Ukrainian statehood and eradicate Ukrainian identity. Instead, it is turbocharging the de-Russification of the country. In the six months since the invasion began, Ukrainian support for de-Russification has become a truly nationwide phenomenon, reaching record highs far in excess of the significantly more modest public backing for de-Communization policies following the country’s 2014 Euromaidan Revolution. This wartime trend is rapidly reversing centuries of Russification and directly undermining Vladimir Putin’s dreams of a new Russian Empire.

Putin’s criminal war is having a truly historic impact on Ukrainian society and bringing Ukrainians together in a quite literal sense. The invasion has forced millions of Ukrainians to flee to the west of the country, where they have either sought refuge or traveled further into the EU. This has led to unprecedented intermingling between Ukrainians from different regions of the country, which is fueling feelings of solidarity and national integration. Recent opinion polls consistently indicate converging opinions on national identity, language, relations with Russia, and future geopolitical objectives among Ukrainians from all regions of the country. One of the national issues Ukrainians are now most united on is the need for de-Russification.

A further factor driving national integration is the mobilization of hundreds of thousands of Ukrainians to serve in the country’s military, with many deploying to frontline regions in the east and the south. Likewise, Ukraine’s large volunteer force is based throughout the country, bringing a wide variety of people from different professional and regional backgrounds into contact with each other for the first time.

The invasion is also speeding up Ukraine’s linguistic de-Russification, with the Russian language now increasingly associated with military aggression. The number of Ukrainians who support Ukrainian as the country’s official state language has risen to 86%. Just 2% of Ukrainians believe Moscow’s claims of a “genocide” against the country’s Russian speakers, but the deliberate weaponization of the Russian language by Vladimir Putin has led many Ukrainians to view the language less favorably.

At the same time, Russian remains widely used in everyday life throughout Ukraine. Language change is a slow process with Russian-speakers typically becoming bilingual before fully adopting Ukrainian. Recent data indicates that 85% use both Ukrainian and Russian at home while just 13% of the Ukrainian population uses only Russian.

Ethnic re-identification appears to be proceeding at a faster pace with 92% of Ukrainian citizens now declaring themselves ethnic Ukrainian in one recent survey. This figure would make Ukraine the third most homogeneous country in Europe after Portugal and Poland. Meanwhile, only 5% of today’s Ukrainian population identified as ethnic Russians in the same survey, representing a striking decline from 22% in the 1989 Soviet census and 17% in the 2001 Ukrainian census.

Ukraine’s relationship with the past is undergoing radical change in response to Russia’s invasion, leading to a widening of the memory divide separating the two neighboring countries. Only 11% of Ukrainians now express nostalgia for the USSR compared to approximately two-thirds of Russians. Likewise, 84% of Ukrainians hold a negative view of Stalin while most Russians have a positive attitude toward the Soviet dictator.

Meanwhile, Ukrainian attitudes toward the country’s twentieth century liberation movement have experienced a major shift. During the early decades of Ukrainian independence, public opinion was often deeply divided on the issue of Ukrainian nationalist groups. This began to change following the 2014 Euromaidan Revolution, when 41% expressed positive views of the OUN (Organization of Ukrainian Nationalists) and UPA (Ukrainian Insurgent Army). Since the February 2022 invasion, this figure has rocketed to 81%.

Ukrainians are now less inclined to differentiate between the Kremlin and ordinary Russians. Following the invasion of Crimea and eastern Ukraine in 2014, a majority of Ukrainians blamed Russia’s leadership. However, they now overwhelmingly hold both the Kremlin and the Russian people responsible for the current invasion. As a consequence, the number of Ukrainians who express positive views of Russians has plummeted from 47% in 2018 to just 3% today.

This collapse in positive attitudes toward ordinary Russians is not difficult to explain. Everything from polling data to anecdotal evidence demonstrates overwhelming Russian public support for the invasion of Ukraine. Millions of Ukrainians with relatives in Russia have personal experience of their family members either applauding the war or accusing them of lying about the horrors of the invasion.

It is also striking that the vast majority of civilian victims during the first six months of the invasion have been the same Russian-speaking Ukrainians in the south and east of the country who Putin claims to be protecting. Tens of thousands were murdered in Mariupol alone, while dozens of other towns and villages have been similarly reduced to ruins in regions of Ukraine that the Kremlin cynically trumpets as “historical Russian lands.”

Given the scale of the carnage, it is hardly surprising that 89% of Ukrainians believe the Kremlin is committing genocide in Ukraine. Almost nine in ten Ukrainians think Russia is seeking the destruction of the Ukrainian state and Ukrainian national identity, while half regard Russia as a fascist regime.

This sense that Ukraine is facing an existential challenge is fueling de-Russification and is also driving Ukrainians to reject any talk of a compromise peace. There is a strong sense throughout the country that without a decisive victory, Ukraine will never be secure. Around half of Ukrainians believe there can never be reconciliation with Russia and another third think it may only become possible in two to three decades. In other words, 78% of Ukrainians rule out any normalization of relations with Russia for at least a generation.

De-Russification at the official level has seen openly pro-Kremlin political parties banned and pro-Kremlin media shuttered. The Russian Orthodox Church (ROC) in Ukraine is on life support with only 4% of Ukrainians now professing membership. This is compared to 54% who identify as members of the Orthodox Church of Ukraine. With the Ukrainian government recently imposing sanctions on ROC head Patriarch Kirill and seven leading members of the ROC clergy for their role in the invasion, the ROC has an uncertain future in Ukraine.

Ukraine’s school curriculum is undergoing wartime de-Russification, with Ukrainian schoolchildren no longer studying Russian language and literature. The cultural de-Russification process also includes the removal of monuments to Russian literary figures such as Pushkin and Dostoyevsky, along with changes to thousands of street and place names across the country.

Irrespective of how long the war will last, it already seems clear that the end product will be a de-Russified and Europeanized Ukraine. This is exactly what Vladimir Putin hoped to prevent. The Russian dictator’s genocidal invasion is both a crime and a blunder on a scale unparalleled in modern European history.

Taras Kuzio is a Professor of Political Science at the National University of Kyiv Mohyla Academy.

Image: A man dressed in a traditional Ukrainian Vyshyvanka shirt with the Ukrainian national flag poses for a photo with a captured Russian tank in Kyiv. (Alex Chan Tsz Yuk / SOPA Images/Sipa USA)