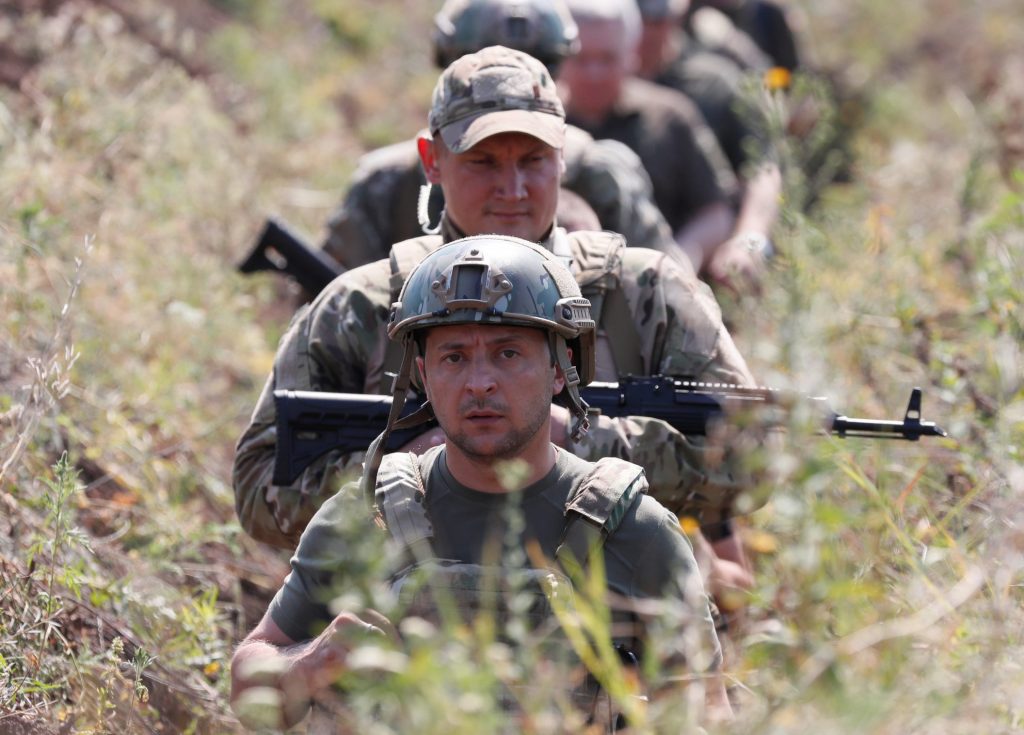 Since taking office in spring 2019, Ukrainian President Volodymyr Zelenskyy has made ending the Russian-Ukrainian War his top priority. However, almost one-and-a-half years later, he has little to show for his efforts. A ceasefire introduced in late July has succeeded in reducing the death toll in eastern Ukraine, but the Russian occupation continues and genuine breakthroughs towards a lasting settlement remain as elusive as ever.

Zelenskyy’s commitment to peace was central to his success in Ukraine’s 2019 presidential and parliamentary elections. Despite this focus, his administration has yet to demonstrate a clear strategy for ending the six-year conflict. Instead, Zelenskyy has adopted a scattergun approach that has included numerous front-line concessions to the Kremlin and a conscious effort to downplay bilateral tensions.

These attempts to win favor in Moscow have failed to alter Russia’s intransigent approach to the conflict. On the contrary, the Kremlin has responded by refusing to revise the Minsk Agreements, consolidating its hold over eastern Ukraine, and issuing Russian passports to local residents.

It is not hard to understand why peace has proven so elusive for Zelenskyy. In addition to the Kremlin’s own uncompromising position, he must reckon with considerable domestic influences such as Ukraine’s formidable civil society and the country’s sizeable veteran community. Zelenskyy also faces a complex Ukrainian political landscape and international pressures from Normandy Format partners France and Germany.

It is equally clear that Zelenskyy has only a limited grasp of the geopolitical objectives that are driving Russian aggression against Ukraine. The former showman appears to have entered office believing his considerable personal charisma could prove decisive during one-on-one interaction with his Russian counterpart Vladimir Putin. As Razumkov Centre military analyst Mykolas Sunhurovsky recently explained to me, such wishful thinking fails to take into account Putin’s long-term goal of a weak Ukraine led by a pro-Russian satrap.

This combination of misplaced optimism and populist campaign trail commitments has shaped Zelenskyy’s somewhat haphazard approach to the peace process. It has also succeeded in creating confusion over the Ukrainian leader’s stance regarding the various “red lines” that lie at the heart of ongoing peace negotiations.

Nothing illustrates the ambiguity of Zelenskyy’s position better than the euphemistic and often contradictory language he and his colleagues use to describe the conflict. Zelenskyy himself is notoriously reluctant to speak in frank terms about a Russo-Ukrainian War, preferring instead to employ vague terms without naming Russia as the aggressor.

According to Zelenskyy’s Chief of Staff Andriy Yermak, this reluctance reflects a conscious decision by the Ukrainian president to avoid antagonizing the Kremlin. “The strategy is not to organise large military parades and not to go on TV to blame the Russians for all our misfortunes,” Yermak explained during early October comments at Chatham House think tank in London.

Other members of Zelenskyy’s inner circle have gone even further. Serhiy Sivokho, a comedy colleague from the Ukrainian leader’s showbiz days, was removed from his position as advisor to the secretary of Ukraine’s National Security and Defense Council in spring 2020 following a public outcry over comments labelling the Russo-Ukrainian War an “internal conflict.”

Similarly, former Ukrainian PM Vitold Fokin was recently dismissed from his role as first deputy head of Ukraine’s delegation to peace talks with Russia in Minsk after he told parliamentarians in Kyiv that he saw no evidence of a Russo-Ukrainian War. These comments sparked considerable outrage within Ukrainian society, but in many ways, they are merely symptoms of the wider confusion created by Zelenskyy’s own mixed messages and disjointed efforts to end the war with Russia.

Zelenskyy’s lack of consistency has left Ukraine’s partners and the country’s adversaries in Moscow equally unsure of where his red lines actually lie. The Ukrainian leader’s decision to accept the so-called Steinmeier Formula governing the sequencing of the peace process is a prominent example of this trend.

In October 2019, Zelenskyy announced that he was committing Ukraine to the Steinmeier Formula, only to later reject core elements of the Formula by ruling out elections in occupied eastern Ukraine until Kyiv regains full security control over the region and border. This apparent attempt to please both Moscow and domestic Ukrainian audiences succeeded in leaving all parties frustrated.

Likewise, the spring 2020 proposal to establish an Advisory Council implied reversing years of Ukrainian refusals to recognize the Kremlin-controlled separatist republics in the east of the country. The proposed Advisory Council was to feature representatives from the separatist republics alongside Ukrainian government officials, with Russia accorded observer status. These plans proved hugely unpopular and were quietly shelved during the early stages of the coronavirus pandemic. Nevertheless, the initiative once again raised doubts about the Ukrainian president’s red lines, while sowing uncertainty among the Ukrainian public and the country’s international partners.

Zelenskyy’s desire to end the Russo-Ukrainian War is commendable. His often-improvised approach to the peace process would also be an asset in most circumstances, but it offers little hope of success in the confrontation with Putin’s Russia.

The events of the past eighteen months have demonstrated that Moscow has no intention of reciprocating Ukraine’s many compromises and is in no hurry to reach a settlement. Indeed, it is difficult to see how Putin could meet Ukraine halfway without accepting the geopolitical loss of the entire country.

If the Kremlin allowed Kyiv to regain control over the occupied eastern regions and the international border, Russia would soon lose its last foothold in mainland Ukraine. The demise of the separatist republics would then expose the fiction of Moscow’s “Ukrainian Civil War” narrative, raising a number of awkward questions regarding Russia’s role in the conflict.

Eventually, Putin would find himself having to justify his secret war against “fraternal Ukraine”, while at the same time attempting to explain the catastrophic loss of influence in a country where Russia had previously been the dominant force for more than three centuries. In other words, it is extremely unlikely to happen.

Faced by these unfavorable geopolitical realities, Zelenskyy is now learning that his personal powers of persuasion are not enough. There will be no rapid progress towards peace as long as Putin remains in control of Russia. Any suggestions to the contrary will only serve to undermine the Ukrainian leader’s political credibility while weakening his negotiating position.

Zelenskyy’s best hope of eventually achieving a satisfactory outcome now lies in adopting the pragmatic policies of his predecessor, Petro Poroshenko. This means clarifying his own red lines and focusing on strengthening international support for Ukraine, while at the same time dampening down expectations among war-weary domestic audiences and preparing them instead for an extended confrontation.

Populist promises of impending peace undoubtedly helped Zelenskyy win election in 2019, but this approach has since led to a series of dangerous and demoralizing concessions without bringing Ukraine any closer to ending the conflict. It is now time to recognize that Russia has no interest in a compromise peace and regards Ukrainian efforts to reduce bilateral tensions as signs of weakness. If Zelenskyy wants peace, he must convince the Kremlin he is prepared for war.

Battle on the home front: Care for Ukraine’s veterans

The situation faced by veterans in today’s Ukraine is not just a human-interest story. The reintegration of veterans must be a priority for Ukraine’s government, its allies, and its NATO partners.