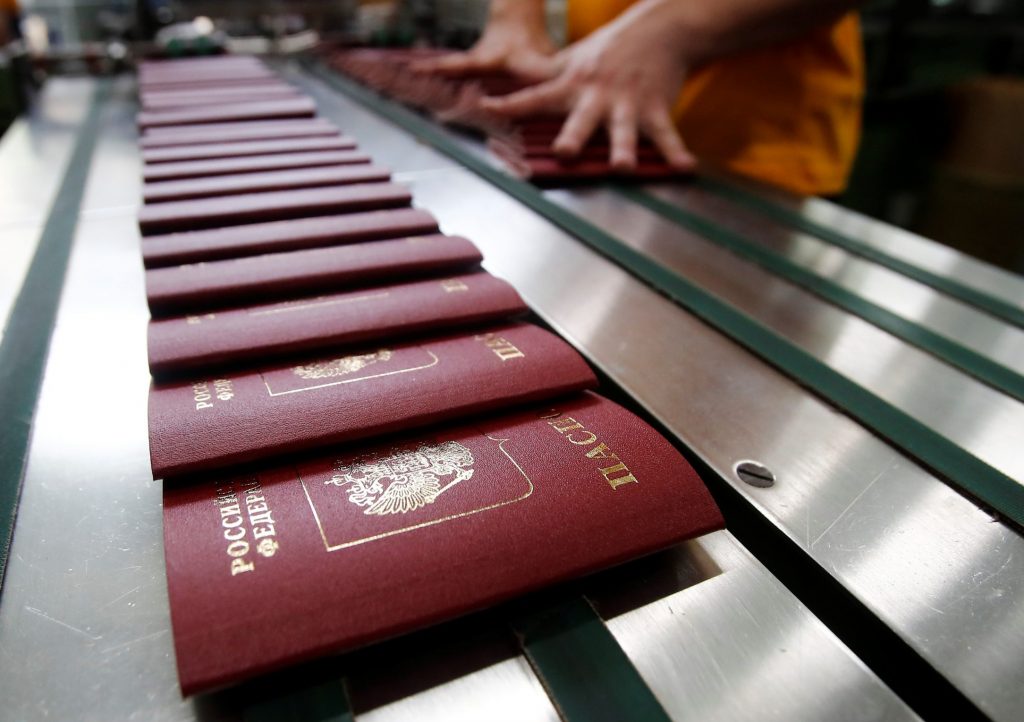 Moscow plans to issue one million Russian passports to residents of Russian-occupied eastern Ukraine by the end of 2020, officials confirmed last week. By creating new demographic facts on the ground, the Kremlin hopes to alter the geopolitical balance in the region and derail efforts to end the six-year undeclared war between Russia and Ukraine. Despite these grave consequences, the international community has yet to impose any additional sanctions on Russia. Instead, Russian President Vladimir Putin is able to continue pursuing policies of passport imperialism in Ukraine with apparent impunity.

Speaking on June 9 in the southern Russian city of Rostov-on-Don, United Russia MP Viktor Vodolatsky confirmed that more than 180,000 Ukrainians had received Russian passports since the introduction of a new fast-track procedure a little over a year ago. According to Vodolatsky, a further 98,000 applications are currently being processed and up to 800,000 more passports are expected to be issued in the second half of the current year.

Plans for simplified passport distribution in Russian-occupied eastern Ukraine were first unveiled in April 2019, just days after Volodymyr Zelenskyy has won the Ukrainian presidency via a landslide victory. Throughout the spring 2019 Ukrainian presidential election campaign, Zelenskyy had been markedly less confrontational towards Russia than his rival, the incumbent Petro Poroshenko. This had led to widespread speculation that Zelenskyy’s election could serve to break the deadlock in a peace process that had witnessed little concrete progress since the end of large-scale hostilities in early 2015.

This initial optimism was soon tempered by the publication of Putin’s presidential decree granting Ukrainians from the occupied east of the country the right to apply for Russian passports via a special streamlined procedure. “These actions are yet more confirmation for the world community of Russia’s true role as an aggressor state, which is waging a war against Ukraine,” commented Zelenskyy at the time. “Unfortunately, this decree does not bring us closer to the ultimate goal of a ceasefire.”

Emboldened by the lack of a robust international response to his initial decree, Putin then escalated his passport imperialism against Ukraine. The Russian leader issued a second decree on July 17, 2019 that extended the citizenship offer to all Ukrainians living in Donetsk and Luhansk oblasts – the two eastern regions of Ukraine that are currently under partial Russian occupation.

This is far from the first time the Kremlin has employed passports as a foreign policy tool to project its influence across the former Soviet Union. The tactic was first seen in Moldova in the early 1990s. The distribution of Russian passports also helped cement Moscow’s grip on the two breakaway regions of Georgia prior to the 2008 Russo-Georgian War. Meanwhile, Russian passports have played an important role in the Kremlin’s Crimean policy, both before and after the 2014 seizure of the Ukrainian peninsula.

Putin’s passport ploy in eastern Ukraine is as clear an indication as you could possibly wish for that Russia has no intention of allowing Ukraine to regain full control over the occupied regions. If the Kremlin’s current forecasts are accurate, there will be one million Russian citizens living in occupied eastern Ukraine by the end of 2020, representing at least a quarter of the entire population. This will transform the so-called separatist republics of eastern Ukraine into Russian passport protectorates.

With Russian citizens representing a large percentage of the region’s overall population, Moscow will claim the legal right to intervene at will in Ukraine’s internal affairs. Such arguments bear little relation to the realities of international law. Nevertheless, they represent a far more convincing pretext for endless interference than the protestations about oppressed Russian-speakers that Moscow has relied upon since Russia’s military intervention began in 2014.

The war Russia unleashed six years ago is far from over and Moscow remains as committed as ever to limiting Ukraine’s independence. Putin’s passport imperialism is central to these ongoing efforts, offering the potential to entrench Russian influence in the country while fatally weakening Ukrainian sovereignty. If it is allowed to proceed unimpeded in occupied eastern Ukraine, the same strategy could then be expanded to additional regions throughout the country, allowing Russia to slowly but surely undermine the Ukrainian government’s ability to function. Sadly, there is nothing particularly far-fetched or fanciful about such nightmare scenarios. Indeed, the passport distribution phase is already underway in unoccupied parts of eastern Ukraine.

Moscow has framed its passport offensive as a purely humanitarian policy designed to ease the suffering of a population trapped in a conflict zone, but these claims are no more credible than the Kremlin’s attempts to portray its well-equipped proxy armies in eastern Ukraine as a ragtag collection of disgruntled miners and tractor drivers. In reality, the weaponization of Russian citizenship is a well-known element of the hybrid arsenal developed by the Kremlin since 1991 and deployed throughout the former USSR as Moscow has fought to retain its imperial influence.

Only an emphatic international response can now prevent the Kremlin from using the same passport tactics to consolidate control over occupied eastern Ukraine and destabilize the rest of the country indefinitely. The European Commission has already taken steps to prevent EU member states from recognizing passports issued via Putin’s April 24, 2019 decree. Further measures targeting the Kremlin are also necessary, including additional sanctions.

Russia is currently in the process of establishing passport protectorates in eastern Ukraine. It is doing so methodically and shamelessly, in front of the watching world. If such brazen aggression is allowed to go unpunished, it will lead to a further erosion of international security, with implications that will be felt far beyond the borders of Ukraine.

Peter Dickinson is the Editor of the Atlantic Council’s UkraineAlert blog.

Image: Moscow plans to issue one million Russian passports to residents of Russian-occupied eastern Ukraine by the end of 2020 in a move that could prolong the six-year conflict between Russia and Ukraine indefinitely. REUTERS/Maxim Shemetov