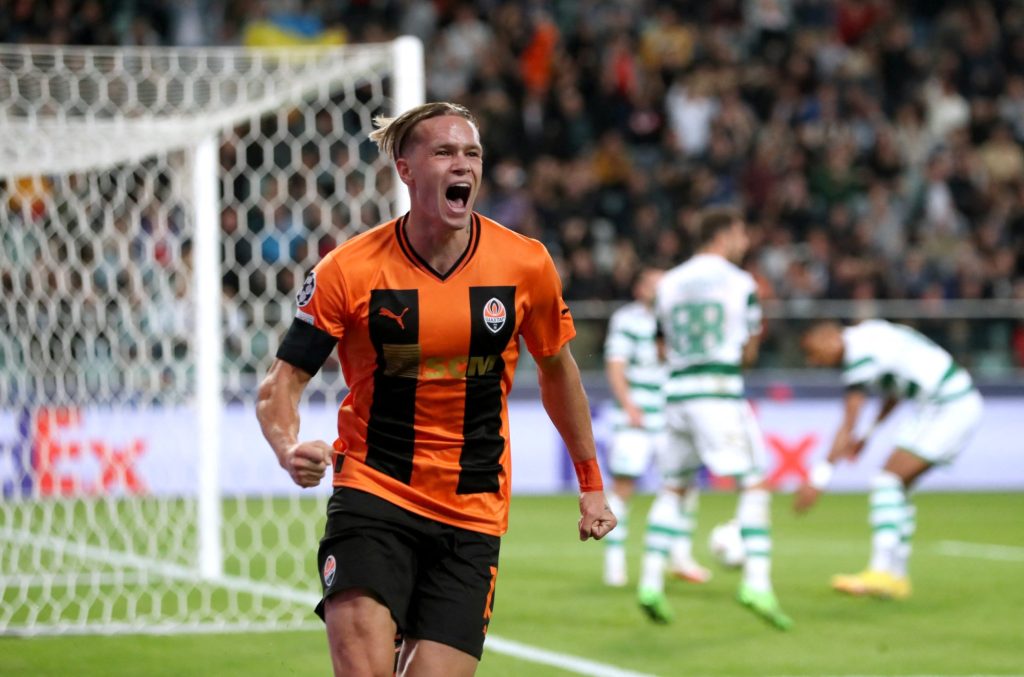 Ukrainian soccer giant Shakhtar Donetsk surprised many pundits this season by recording the club’s strongest UEFA Champions League performance in recent years despite suffering from wartime exile and a mass exodus of star players. The secret to Shakhtar’s success was a reliance on young Ukrainian talent and an indomitable team spirit that drew inspiration from Ukraine’s wider defiance of Vladimir Putin’s criminal invasion.

Shakhtar Donetsk approached the current Champions League campaign in near complete disarray. The club had not played competitively for around half a year following the abandonment of the Ukrainian Premier League season in late February 2022 in response to Russia’s full-scale military invasion of the country.

With the largest conflict since World War II raging across Ukraine, most of Shakhtar’s expensively assembled foreign stars chose to leave the club. This left Croatian trainer Igor Jovicevic with a threadbare squad of local youngsters charged with filling the void created by the sudden departure of Shakhtar’s celebrated Brazilian imports.

Most observers expected this inexperienced side to be completely outclassed in what is Europe’s premier football competition. Instead, Shakhtar put together a highly credible Champions League group stage campaign that saw the club defeat Germany’s Leipzig in style before drawing against both Real Madrid and Celtic to secure a place in February’s Europa League playoffs. This six-point haul was a considerable improvement on the previous season’s effort, which had seen Shakhtar collect just two points and exit European competition before Christmas.

The scale of Shakhtar’s achievement was most immediately evident in the club’s first group stage tie. Despite being considered rank outsiders, the Ukrainians scored a shock 4-1 victory away in Leipzig. Ten of Shakhtar’s starting eleven players in Germany were Ukrainian, while six were under the age of 23. Some had been signed recently from less fashionable Ukrainian clubs such as Desna Chernihiv and FC Mariupol and were enjoying their first taste of Champions League football.

Other highlights of the campaign included an impressive 1-1 draw with the mighty Real Madrid. Shakhtar actually came within seconds of what would have been an historic victory over Madrid, only for the Spanish giants to grab an injury time equalizer in the ninety-fifth minute.

The undoubted star of this season’s Shakhtar show has been turbo-charged winger Mykhailo Mudryk. The tattooed and coiffured 21-year-old Ukrainian player looks every inch the celebrity footballer and was already turning heads before this year’s campaign. Following a series of stunning Champions League performances, he is now regarded as one of the most sought-after players in world football.

Mudryk weighed in with a total of three Champions League goals and two assists. He was also recognized by UEFA as the fastest player in the Champions league group stages with a top speed of 36.6 kilometers per hour. This emerging superstar is now being widely tipped for a big money transfer to English Premier League club Arsenal and could soon break the record for the most expensive Ukrainian player.

Shakhtar’s success is all the more remarkable as the club has been forced to play its Champions league ties in exile. With the Russian invasion making it impossible to stage Champions League games anywhere inside Ukraine, Shakhtar has played home matches in Polish capital Warsaw.

This nomadic existence is not entirely new for the club. Shakhtar has been unable to stage matches in hometown Donetsk since the city was first occupied by Russia in spring 2014, and has spent the past eight seasons alternating between temporary bases in Lviv, Kharkiv, and Kyiv.

The scale of the war unleashed by Putin meant that this season’s Champions League campaign involved additional logistical issues for the club as players and staff traveled from their base in western Ukraine’s Lviv region. With no civilian flights currently possible in Ukrainian airspace, players were forced to endure ten-hour coach journeys across the border into Poland prior to and following European games.

Shakhtar players also suffer from the same wartime trauma and anxiety as millions of their compatriots. Most members of the overwhelmingly Ukrainian first team squad have friends and family living across the country who are experiencing the daily horrors of the Russian invasion including missile attacks and drastically limited access to light, heating, water, and other basic amenities.

Despite these uniquely difficult circumstances, morale within the club has remained remarkably high. There is a strong sense of camaraderie among the players and an awareness that their success on the football pitch can provide a welcome distraction from the war while also inspiring fellow Ukrainians to defy their doubters.

Overcoming overwhelming odds has become something of a Ukrainian national pastime in 2022. When Putin’s invasion began on February 24, the entire country was widely expected to fall within a matter of days. Instead, Ukraine’s courageous and brilliant resistance has humbling the once vaunted Russian military and won the admiration of the watching world.

Shakhtar’s heroics are of a far humbler nature, of course. Nevertheless, the club’s determination to overcome wartime adversity has captured the imagination of football fans across Europe and provided Ukrainians with one more symbol of their country’s refusal to accept defeat.