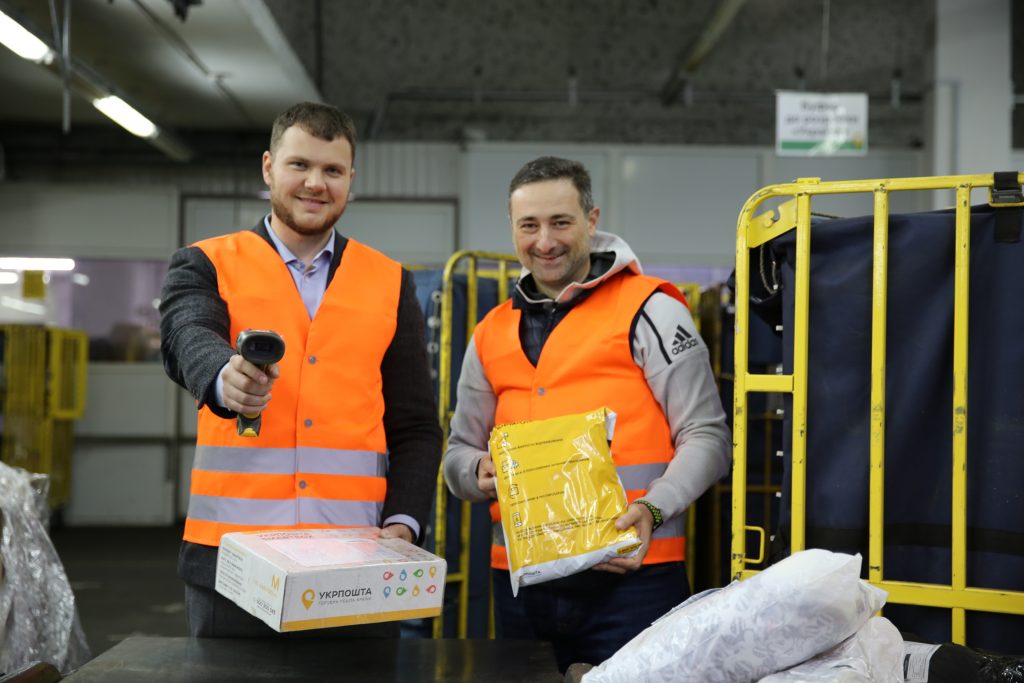 In recent months, Ukrposhta CEO Igor Smelyansky (right) has found himself at the center of a heated public debate over the high salaries of executives at Ukraine's state-owned enterprises. He argues that competitive pay is crucial in the fight against a deeply entrenched culture of corruption within the Ukrainian public sector.

Ukrposhta CEO Igor Smelyansky is the unrepentant poster boy for corporate-competitive salaries in the Ukrainian state sector, and he wants everyone to know it. In recent months, Smelyansky’s income has become the subject of a heated national debate as populist politicians fuel public outrage over the dramatically inflated pay packets of government officials and managers of state-owned enterprises in a country where average salaries remain among the lowest in Europe. There have been Facebook memes, talk show diatribes, and angry op-eds all denouncing the alleged injustice of his high salary. One particular low point was the day he discovered he’d dislodged Ukraine’s latest pop starlet as the main story on the front page of the country’s most popular tabloid newspaper. Managers of national postal services do not normally attract this kind of attention.

When we meet for breakfast in a downtown Kyiv cafe next to the central post office that serves as the nerve center of his vast postal empire, Smelyansky says the fuss is a symptom of the thinking that keeps millions of Ukrainians trapped in poverty. “I would be much richer if I accepted bribes,” he quips. This one-liner captures the essence of Smelyansky’s argument. He sees himself as a reformer on a mission to change the way the Ukrainian public sector operates, and makes no apologies for expecting to be paid the market rate. On the contrary, he believes the old practice of paying relative peanuts to top officials served as an open invitation for the kind of institutionalized corruption that has crippled the Ukrainian economy ever since the country first achieved independence in 1991. This is hard to argue with. Senior members of Ukraine’s public sector are notorious for living in multi-million dollar palaces and acquiring fleets of luxury cars while declaring absurdly low official salaries, with the illicit rich pickings on offer driving a culture where top positions are routinely sold to the highest bidder and complex networks of interdependency keep the corruption gravy train firmly on track. The only way to break this vicious circle, says Smelyansky, is to recruit a new generation of professionals and offer them salaries that can compete with the private sector.

Since taking on the role of Ukrposhta CEO in 2016, Smelyansky has grown used to the idea that his salary is public knowledge. At first glance, his basic monthly pay of around $35,000 does indeed seem startlingly high by Ukrainian standards. With bonuses, he could potentially take home twice as much. However, he is quick to point out that this is actually far less than many CEOs in Ukraine’s private sector currently receive, and significantly lower than the salaries he himself has commanded in the past. Odesa-born Smelyansky came to Ukrposhta from the US, where he was headhunted for the post while working for KPMG in New York, having earlier graduated from George Washington University Law School and received an MBA from Georgetown University. Why did he agree to swap a promising career in the upper echelons of the corporate world for the uncertainties and turbulence of the post-revolutionary Ukrainian public sector? Like many other reformers, Smelyansky was enticed by the prospect of bringing about meaningful change in Ukraine and drawing a line under decades of dysfunction. “If I can change Ukrposhta, this symbol of the lingering Soviet mentality, then anything can be changed in Ukraine.”

The task he faced upon arrival at the helm of Ukraine’s national postal service could certainly be described as Herculean. The company he took over was the country’s second-largest employer with around 70,000 staff and over 11,000 branches. It was also riddled with corruption. “The whole system was in balance. Everyone was stealing,” he says. As a self-proclaimed disruptor intent on shaking up the entire institution, Smelyansky did not expect to receive a particularly warm welcome, but he did not shy aware from confronting his detractors. He recalls the moment in the early days of his tenure when he gathered a number of Ukrposhta managers into a meeting room overlooking the company car park and asked them to point to a single-vehicle parked outside that could be bought on their official salaries. A stony silence ensued. The gesture did not win him many friends, but he had made his point.

How Russia is handling coronavirus

Confronting corruption was only part of the problem. Since 2016, Smelyansky has sought to transform the corporate culture within Ukrposhta and overcome the pervading sense of inertia that is all-too-common in the Ukrainian state sector. Over the past four years, he has begun the process of bringing the vast Ukrposhta branch network into the digital age, gotten the business model back on track by demanding market rates from the state for pension delivery services, and launched innovative initiatives such as an export school to teach Ukrainian SMEs how to sell their wares on Amazon and eBay. These efforts have produced striking increases in both revenues and postal traffic. Ukrposhta reported record annual profits last year of more than UAH 600 million. When Smelyansky arrived in 2016, the postal operator was shipping 46,000 express parcels per year. By early 2020, the figure was 47,000 per day. There has also been unprecedented international recognition. At the 2019 World Post and Parcel Awards in Dublin last summer, Ukrposhta’s E-Export Program took top spot globally in the Corporate Social Responsibility and Postal E-Commerce categories.

So far, these impressive results have failed to convince Smelyansky’s critics. He is philosophical about the negativity he continues to encounter, and argues that it may require a generational shift in thinking before attitudes evolve. “You have to begin teaching people at kindergarten age that professional success is a good thing,” he says. “The guy living in a mansion and driving a luxury sedan on an official salary of $300 is not a hero. The guy running a big company successfully and earning an honest salary is who you should aspire to be. As it is, people know the bosses are stealing, but they sleep better because they don’t know how much is being stolen. At the same time, they complain that I should not have such a high salary in a poor country, but the reason they are poor is because all the managers on low salaries already stole everything.”

Ukraine has recently marked one year of Orthodox independence. The country’s religious landscape has yet to change dramatically, but the significance for Ukraine’s nation-building journey cannot be overstated.