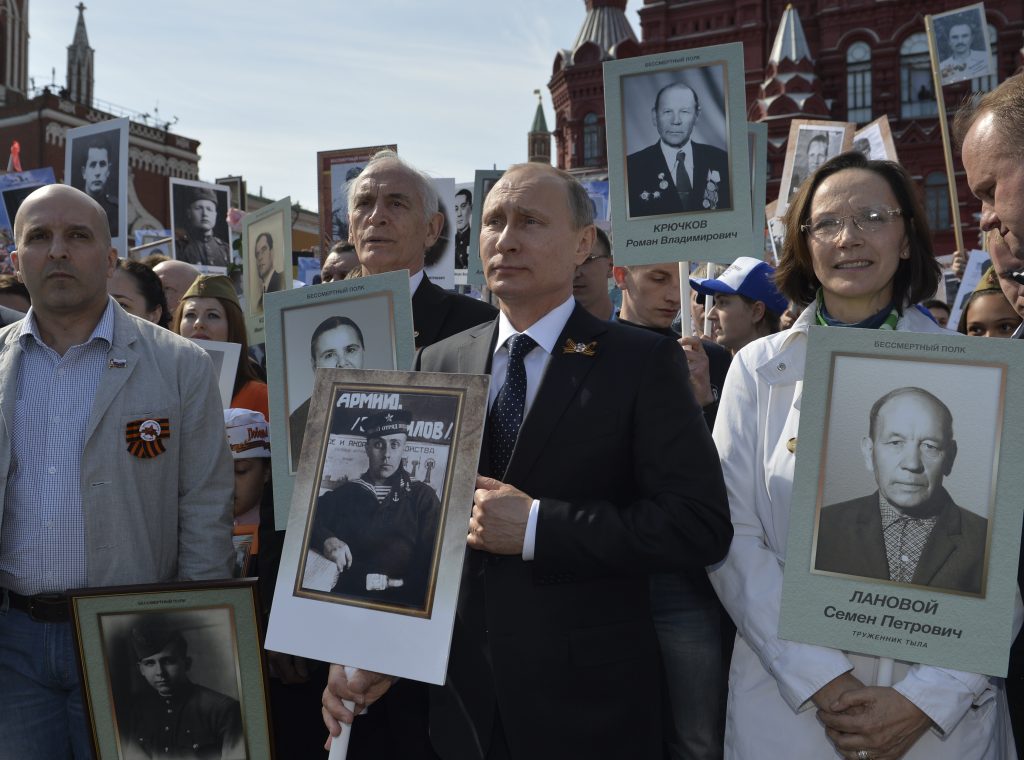 Russia has been widely accused of downplaying the severity of its coronavirus outbreak, but the Kremlin recently hinted at the true scale of the crisis by postponing the country’s annual Victory Day parade from the traditional date of May 9 to early September. This was not a decision taken lightly in Moscow. The holiday, which marks the Soviet triumph over Nazi Germany, has played a central role in Vladimir Putin’s efforts to rebuild Russian national pride in the wake of the Soviet collapse. As such, any disruption to this year’s seventy-fifth anniversary festivities represents a blow to the authority and prestige of the entire Putin regime.

Under Putin, the cult surrounding the Soviet experience in WWII has reached new heights and served as the perfect antidote to the shame and humiliation of the early post-Soviet years. Both domestically and internationally, it has proven effective in shifting the focus away from Soviet crimes against humanity while affording the Kremlin a rare opportunity to position Russia on the right side of history. Crucially, it also allows the Kremlin to legitimize the authoritarianism of today’s Russia by instilling a sense of pride in the authoritarian past.

This preoccupation with WWII is often evident in the country’s international relations. For example, a diplomatic confrontation is currently unfolding with the Czech Republic over the decision by local authorities in Prague to remove a monument of Soviet General Ivan Konev. In response, Russia’s Minister of Defense Sergei Shoigu has initiated a criminal case. Konev’s legacy is particularly important as he was a key figure in the Soviet occupation of Central Europe, which the Kremlin prefers to see as a liberation that must honored and celebrated. Unsurprisingly, many Czechs disagree. This episode is a good example of Moscow’s efforts to impose its historical narratives on other countries by using Soviet monuments as pieces on the geopolitical chessboard.

The latest round of history wars began in autumn 2019 with a European Parliament resolution that accused the Soviet Union of sharing responsibility for the outbreak of WWII with Nazi Germany. Vladimir Putin responded to this with a major offensive of his own. Poland was a particular target of the Russian leader. Putin labeled the Poles as accomplices of Hitler who participated in the 1938 partition of Czechoslovakia. Meanwhile, the Nazi-Soviet Pact that sparked WWII was portrayed as a pragmatic victory for Soviet diplomacy. The Soviet military invasion of Poland that then took place in September 1939 in partnership with Hitler received scant attention.

Putin’s recent flurry of historical commentaries reflect the ongoing evolution of his public statements on WWII, which have become increasingly outspoken since his cautious condemnation of the Molotov-Ribbentrop Pact in the late 2000s. Nor is Putin’s taste for Russia-friendly historical revisionism restricted to WWII. Another of his favorite topics is the history of Russia-Ukraine ties.

In February 2020, Putin gave a lengthy interview to Russian state news agency TASS in which he shared his personal interpretation of Ukrainian history. This revealing interview confirmed that Putin's historical vision of the Russia-Ukraine relationship revolves around the idea that Russians and Ukrainians constitute “one people” who have been artificially separated and are in need of unification. The Russian leader's beliefs in this regard appear to be entirely sincere. Indeed, Ukrainians have been living with the tragic consequences of his convictions for the past six years of undeclared war between the two countries.

Ukraine’s experience is extreme but not entirely exceptional. The Baltic states have faced repeated attacks over their attempts to honor twentieth century liberation movements and condemn the Soviet occupation, while opponents of Russian influence are routinely targeted in the language of WWII and branded as fascists by the Russian establishment.

Such conduct has become increasingly prominent since 2000 as Moscow has rediscovered the sense of geopolitical self-confidence that was temporarily lost during the shocks of the Soviet collapse. Indeed, history wars have emerged as an important feature of Putin’s reign, becoming easily identifiable symbols of the country's bid to recover its international standing and reassert its regional influence.

The massive disruption of the coronavirus crisis means that we will soon find ourselves confronted by a post-pandemic world requiring new ideas and fresh interpretations of the past. This will challenge our understanding of history and its impact on the future direction of world affairs. A new battle for history is likely to ensue. As an early starter with a clearly defined revisionist narrative already in place, Russia enjoys significant advantages in this coming war for world history.

It is a conflict Ukraine cannot afford to avoid. The current approach of the Ukrainian authorities to the politics of memory, which seems to rely on avoiding awkward or contentious historical topics whenever possible, will not enable the country to emerge unscathed. Instead, Ukrainians must develop and promote historical narratives of their own.

In a democracy, healthy competition between rival historical interpretations is both possible and desirable. However, when history is weaponized by an aggressor as part of an attack on the country, there can be no room for ambiguity. The sooner we acknowledge the role of history within Russia’s wider hybrid war against Ukraine, the more effectively we will be able to respond to the challenges this creates.

The Ukrainian authorities need to understand that history is not primarily about the past, or even about the present. History is about the future. Either we start promoting our own historical narrative, or we will have a foreign and hostile narrative imposed on us by Russia. Defeat in the history war will automatically mean the loss of national identity. Ultimately, this will lead to the loss of the country itself.

What steps should Ukraine currently be taking? The government needs to recognize the role of soft power tools in the promotion of historical narratives. This means no more cuts in state funding for cultural initiatives such as support for Ukrainian literature and the country's movie industry.

Instead of avoiding controversial topics, Ukraine must seek to encourage a national dialogue that can lead to the emergence of common narratives. We should also look to place these Ukrainian narratives in a broader international context that underlines the central role of the country in European history, from the days of the Kyiv Rus to the Ukrainian experience at the epicenter of twentieth century totalitarianism.

The coronavirus crisis is accelerating global trends and may yet become a watershed moment signifying the dawn of a new era. After centuries in the shadows, this gives Ukraine a chance to seize the initiative and push back against the overwhelmingly Russocentric historical narratives that continue to surround the country. In order to secure the country’s future, Ukraine must first win the fight for its past.

Vladimir Putin's plans to change the Russian Constitution offer a strong indication that he intends to remain in charge of the country for the rest of his life. For Ukraine, this means coming to terms with the reality of endless imperial aggression.

Ukraine's President Zelenskyy says he will make painful concessions to achieve peace with Russia, but Putin's vision of Ukraine as part of Russia's historic heartlands means there is little room for compromise.