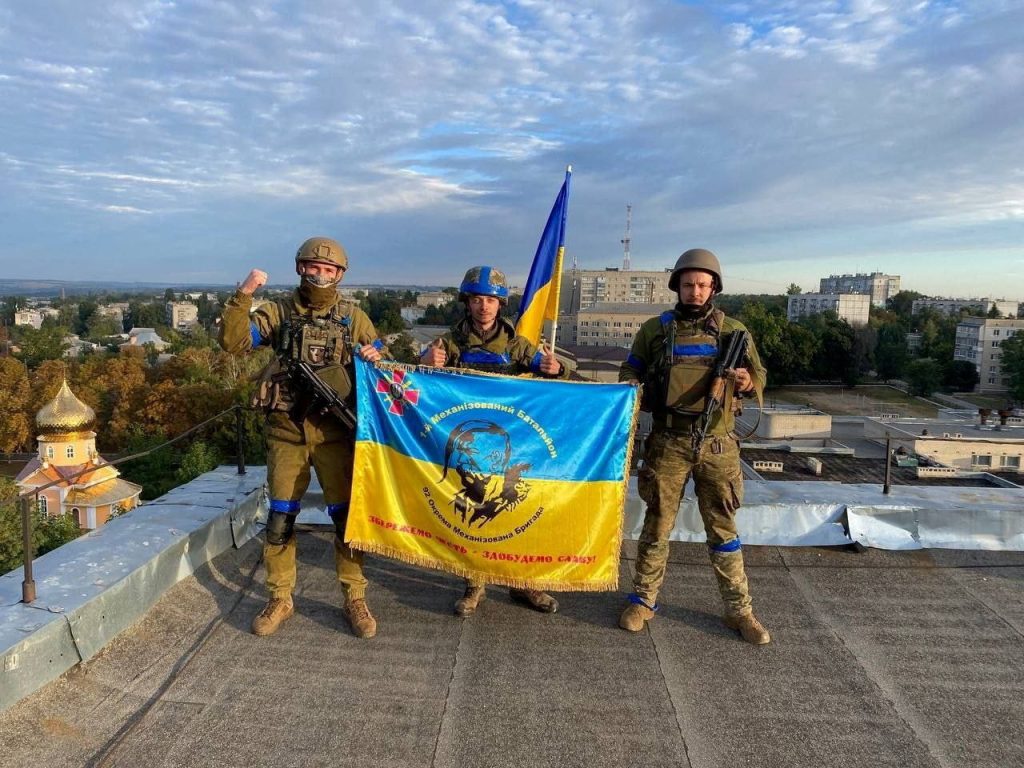 Ukraine’s stunning counteroffensive success in the Kharkiv region has provided conclusive proof that the Ukrainian Armed Forces are more than capable of defeating Russia on the battlefield. Now is the time to end the war by providing Ukraine with everything necessary to consolidate these gains and secure a decisive victory.

Victory requires a coordinated, multifaceted, and long-term approach with economic, diplomatic, humanitarian, and logistical support all needed in order to bolster the Ukrainian transition to NATO-standard weaponry. Above all, this means a full commitment by Ukraine’s partners to increase arms supplies to the country.

The scenes accompanying recent Ukrainian advances have helped bring into focus the genocidal consequences if Russia is not decisively defeated. As Ukrainian troops liberated towns and villages across the Kharkiv region last week, their progress was marked by a steady stream of videos capturing the emotionally charged moments of liberation. This footage is a powerful reminder of the plight facing millions of Ukrainians currently living under Russian occupation.

In one video from Balakliya, elderly women emerged from their apartment building to greet Ukrainian soldiers, their ecstasy evident. “We have prayed for you to come save us for half a year!” one cried while embracing the soldiers. “What good boys!” another repeated. Belying Russian propaganda that Russian-speakers in Ukraine are persecuted, the women embraced the Ukrainian soldiers with affectionate words in the Russian language.

Another video from Balakliya underscored exactly what is at stake in the counteroffensive. In this video, Ukrainian soldiers triumphantly removed a Russian propaganda billboard featuring the slogan “We are with Russia! One people!” This billboard was a blunt example of the genocidal language employed by the Kremlin in its campaign to destroy the Ukrainian national group.

Russia’s “one people” propaganda denies Ukrainians the right to view themselves as a distinctive national group, a category protected under the United Nations Convention on the Prevention and Punishment of Genocide. It is one more piece of evidence demonstrating Moscow’s intent to eradicate Ukrainian national identity through violent, coerced Russification and the killing of those they view as “irredeemably Ukrainian.”

Ukrainians throughout the country are well aware of Russia’s genocidal intentions. Indeed, Kremlin leaders and propagandists alike make no secret of their desire to wipe Ukraine off the map of Europe completely. Putin himself has dismissed Ukraine as an illegitimate and intolerable “anti-Russia.” Russian television pundits and politicians alike have demonized Ukrainians, saying, “We and Ukraine cannot continue to exist on the same planet. It is impossible to coexist with infernal evil.”

In areas of Ukraine that have fallen under Russian control since the launch of the full-scale invasion in February 2022, the occupation authorities have declared that Russia has come “forever.” All traces of Ukrainian identity have been targeted and suppressed including Ukrainian language road signs, tattoos, and education. Teams of schoolteachers have even been brought in from Russia to indoctrinate Ukrainians.

As the whole world saw following the early April liberation of Kyiv region towns such as Bucha and Irpin, Russian troops have engaged in the systematic mass murder of Ukrainian civilians. Hundreds of thousands of Ukrainians including large numbers of children have also been subjected to forced deportation to the Russian Federation.

The horrors of Russian occupation have shaped Ukrainian attitudes toward the war. Unsurprisingly, polls consistently show that most Ukrainians reject any talk of surrendering their land (and fellow citizens) in any agreement and understand that they will never be safe until Russia is defeated.

Many Ukrainians are also guided by their historical experience of previous genocidal campaigns waged by the Kremlin. Throughout the past eight years of Ukraine’s armed conflict with Russia, Ukrainians have repeatedly referenced the 1932-33 Holodomor famine to underscore that “Russia past and present is threatened by an independent, prosperous, and democratic Ukraine.”

While Ukrainians view their current fight against Russian imperialism as part of a centuries-long struggle, one critical distinction separates today’s brutal war from earlier atrocities. Whereas the international community largely ignored the 1930s Soviet genocide, Ukraine now enjoys overwhelming backing from the democratic world. This could well prove decisive.

History indicates that genocidal campaigns typically end either in the total victory of the perpetrators or the victims, with external support often playing a decisive role. Efforts to find “middle ground” or promote negotiated settlements in such situations do not last or protect victims.

Increased international military aid is now crucial. This aid should include more advanced weapons systems that will allow the Ukrainian military to build on recent battlefield successes and secure ultimate victory. It is equally important to enhance Ukraine’s air defense capabilities in order to protect the country’s civilian population from Russian retribution as Putin’s army is forced to retreat.

The achievements of Ukraine’s counteroffensive should be sufficient to silence the skeptics who continue to question the value of arming the country. Likewise, the accompanying scenes of liberation should be enough to convince advocates of appeasement that condemning Ukrainians to Russian occupation is morally repugnant. Now is the moment for the international community to consolidate its support for Ukraine and deal a decisive military blow to Russia’s genocidal invasion.

Russia may not survive Putin’s disastrous decision to invade Ukraine

The Russian Federation looks set to face growing threats from domestic separatist movements in the coming years as Vladimir Putin’s disastrous decision to invade Ukraine serves as a catalyst for imperial collapse.