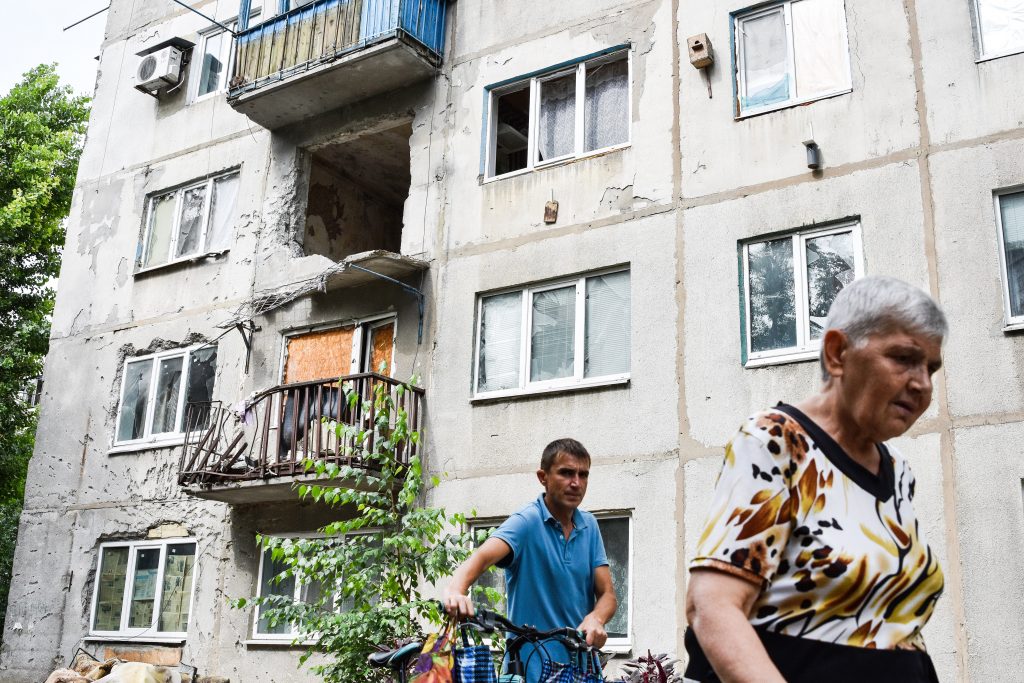 On July 22, 2020, representatives from Ukraine, Russia, and the Organization for Security and Co-operation in Europe (OSCE) agreed to implement an enhanced ceasefire in eastern Ukraine. In the months that followed, ceasefire violations significantly decreased and the Office of the United Nations High Commissioner for Human Rights reported zero conflict-related civilian casualties resulting from active hostilities throughout the duration of the year.

Unfortunately, these positive developments proved to be only temporary, with the conflict dynamic showing a reversing trend in the beginning of 2021, demonstrating once again that no armed conflict can ever truly be deemed “frozen.”

Faced with another failed ceasefire and with little prospect for a conflict settlement in the foreseeable future, the Ukrainian government should seek to improve the plight of civilians living along the contact line. Physical harm, psychological trauma, and destruction are not unavoidable consequences of conflict. They can and should be prevented. Civilian casualties should not be an everyday occurrence.

The good news is that the Ukrainian government is mere steps away from implementing measures to improve civilian protection. The state has already drawn up a framework designed to establish a comprehensive, multi-level system for the protection of civilians (POC) in armed conflicts. Elaborated by the Armed Forces’ Civil-Military Cooperation Directorate (CIMIC) and the Ukrainian Ministry of Defense, the National Strategy for the Protection of Civilians in Armed Conflicts until 2030 (the Strategy) was endorsed by Ukraine’s Cabinet of Ministers back in October 2020.

This document incorporated many of the best international standards, reflecting both by content and structure the NATO Policy for the Protection of Civilians, endorsed by the alliance’s heads of state during the 2016 Warsaw summit. NATO’s POC Policy enabled the launch and development of a consistent framework for protecting civilians in NATO’s military operations and activities.

Ukraine has also been influenced by broader advances in policies and mechanisms over the past twenty years to protect civilians in armed conflicts. The European Union, United Kingdom, United States, and Switzerland have all adopted strategic policies on the issue. In this way, Ukraine’s nascent approach to protecting civilians in armed conflicts is in step with the country’s national and international law commitments, while also being ideally aligned with the drive to acquire NATO membership.

Experience from campaigns around the globe provides plentiful evidence that the protection of civilians simultaneously has a strategic value, as it directly affects the success of military operations. Meanwhile, underestimating the human dimension in the operation area can easily result in losing “hearts and minds.”

This is especially important for a country like Ukraine, which is regularly used by Russia as a testing ground for new forms of unconventional warfare. As identified in research conducted by our organization, the Center for Civilians in Conflict (CIVIC), the primary impact of hybrid activities on civilians is psychological harm galvanized by a sense of chaos and uncertainty. Disinformation campaigns focusing on conflict-related civilian casualties can irrevocably undermine the trust between civilians and state institutions including the military.

Savvy strategic communications prioritizing “being first with the facts,” as envisaged in the Strategy, would strengthen Ukraine’s efficiency in countering such campaigns. In the end, it is not only the territory that is supposed to be protected, but the people living in it. If adopted and operationalized, Ukraine’s Strategy would instill a systematic approach to the protection of civilians, while also supporting broader military interests.

Without strong leadership, Ukraine’s Strategy will surely fail. The heads of the country’s Armed Forces structures will need to be committed to emphasizing the importance of protecting civilians. Thankfully, the Armed Forces of Ukraine is already positioned to champion civilian protection with tools like the Civilian Casualty Tracking Provisional Group (CCTPG). Established in December 2018, the CCTPG proactively records and analyzes civilian harm incidents in order to identify root causes and provide recommendations.

This leaves the Ukrainian political leadership, which still has to demonstrate its interest in completing the final adoption of the National Strategy for the Protection of Civilians in Armed Conflicts. After the Cabinet’s unilateral endorsement in late 2020, the Strategy was handed over to the President and the National Security and Defense Council of Ukraine for review and final approval, where it is still waiting. The legalese and technical issues which have been cited as reasons for the delay cannot justify putting the Strategy on hold indefinitely.

Ongoing fighting in eastern Ukraine continues to expose civilians to death, trauma, and destruction, jeopardizing the lives of hundreds of thousands living along the contact line. This situation provokes reasonable questions. Why has Ukraine’s political leadership not signed the National Strategy for the Protection of Civilians in Armed Conflicts? Why is a state policy, developed by the Armed Forces and validated by the Cabinet of Ministers to minimize the suffering of people caught up in the conflict, still not accepted? President Zelenskyy has a solid chance to take a meaningful step towards protecting Ukrainian civilians. Further inaction risks damaging and endangering more lives.