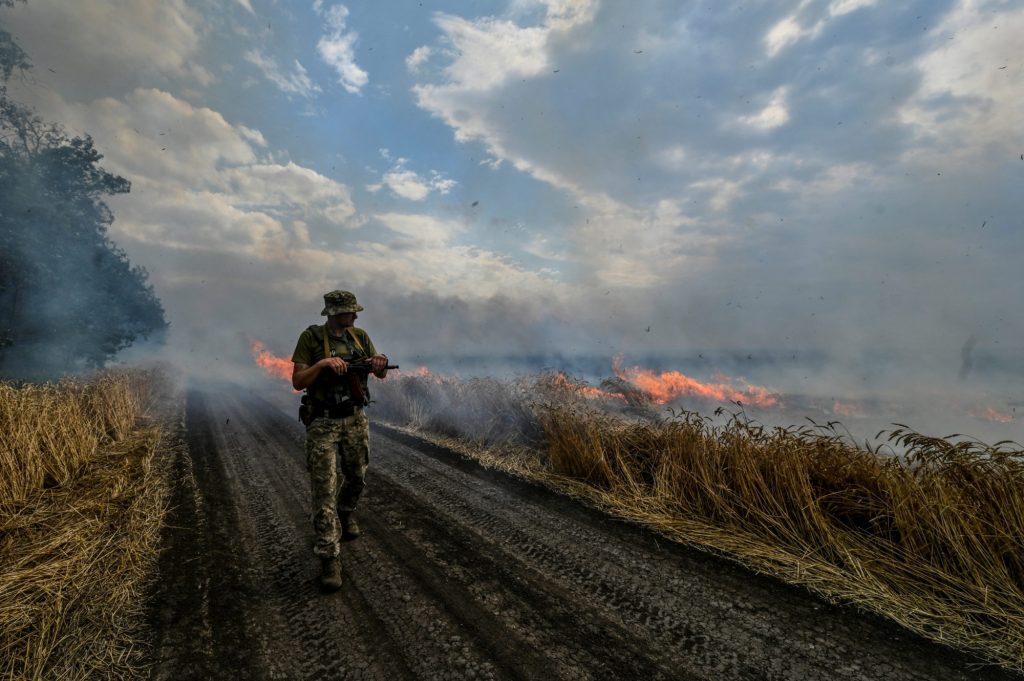 Six months since the start of Russia’s brutal invasion, Ukraine is still standing tall and remains an inspiration for the world. As the words of its national anthem proclaim: “Ukraine has not perished yet, neither its glory, nor its freedom.”

We firmly believe Ukraine will win, but the country now needs more support than ever through increased US military, economic, and diplomatic efforts. Russia currently occupies approximately twenty percent of Ukraine. For millions of Ukrainians trapped in occupied regions of the country, this has become a tragic everyday reality.

In addition to the economic devastation wrought by Russian bombings of Ukrainian cities, Russia has also completely blocked Ukraine’s ports, leaving the country unable to export its goods, particularly the grain that is much needed to feed the world’s vulnerable populations. A recent UN-brokered deal to allow some shipments is not enough to resolve the problem. The coming hunger crisis in the Middle East and Africa will be another casualty of Russian aggression, unless the world acts now.

Our first order of business should be the continued provision of heavy weapons to Ukraine so it can push back the Russian forces that are now entrenched in eastern and southern Ukraine. The Ukrainian military has performed valiantly on the battlefield against a much larger force, but their counteroffensive capabilities remain limited due to a lack of serious firepower.

As the military wisdom goes, “quantity has a quality of its own,” and the Russians are still not short of artillery, armor, and troops they can throw into the fight. This is why we are thankful to Congress for approving a USD 40 billion appropriations package that includes at least USD 6 billion for new weapons for Ukraine, including modern weapons systems like the High Mobility Artillery Rocket Systems (HIMARS). These systems, along with ammunition and provision of additional armor, will make a major difference for Ukraine’s armed forces.

Second, we must urgently act to impose additional sanctions against the Kremlin, including the designation of Russia by the US State Department as a global state sponsor of terrorism. In Congress, legislation to do so was first introduced in 2018. In 2019, this bill passed through the Senate Foreign Relations Committee. If the designation is enacted, Russia would join the august company of Iran, Syria, North Korea, and Cuba, and would face additional US sanctions.

We applaud efforts of current members such as Senators Lindsey Graham and Richard Blumenthal, whose resolution calling on the State Department to make such a declaration passed the Senate recently. Following Russia’s air strike on a Ukrainian shopping mall in June that left over 20 dead, Ukrainian President Volodymyr Zelenskyy poignantly remarked, “If in any part of the world any organization killed civilians just as Russia kills Ukrainians, it would definitely be recognized as terrorism. Such an organization would become an enemy of all mankind.”

We must also develop a plan for long-term military and economic support for Ukraine. The reality is that the current war will not end anytime soon, nor will Russia stop impeding Ukraine’s sovereignty and economic viability.

Recognizing this reality, the Biden administration must work with Congress to set up a Ukraine support fund that will hopefully resemble our long-standing efforts to help key global allies like Israel. While the annual dollar amount may vary and would naturally be subject to Congressional procedures and debates, we believe that with the strong support of the Ukrainian-American community, it will have strong bipartisan backing and lasting support.

On May 21, 2022, both of this article’s authors had the distinct “honor” of being included on the Kremlin’s sanctions list of Americans banned from Russia. Besides the inconvenience of ruining our planned vacations in Siberia, it is a recognition of our efforts as members of Congress and leaders in the Ukrainian-American community to help Ukraine survive the Russian onslaught and emerge stronger in the end.

As Winston Churchill said to Neville Chamberlain in 1938 after the Nazi annexation of Sudetenland: “You were given a choice between war and dishonor. You chose dishonor and you will have war.” Let us not repeat the mistakes of the past. We must help Ukraine now or our children and grandchildren will reap the consequences of our inaction.

Cory Gardner served as a Representative (2011-2015) and Senator (2015-2021) from the state of Colorado, and was the Chairman of the Senate Foreign Relations Subcommittee on East Asia, the Pacific, and International Cybersecurity Policy from 2015-2021. Andrew J. Futey is the President of the Ukrainian Congress Committee of America (UCCA).

Image: A Ukrainian serviceman walks in a burning wheat field near the frontline between Zaporizhia and Donetsk regions as Russia’s attack on Ukraine continues,. July 17, 2022. (REUTERS/Dmytro Smolienko)