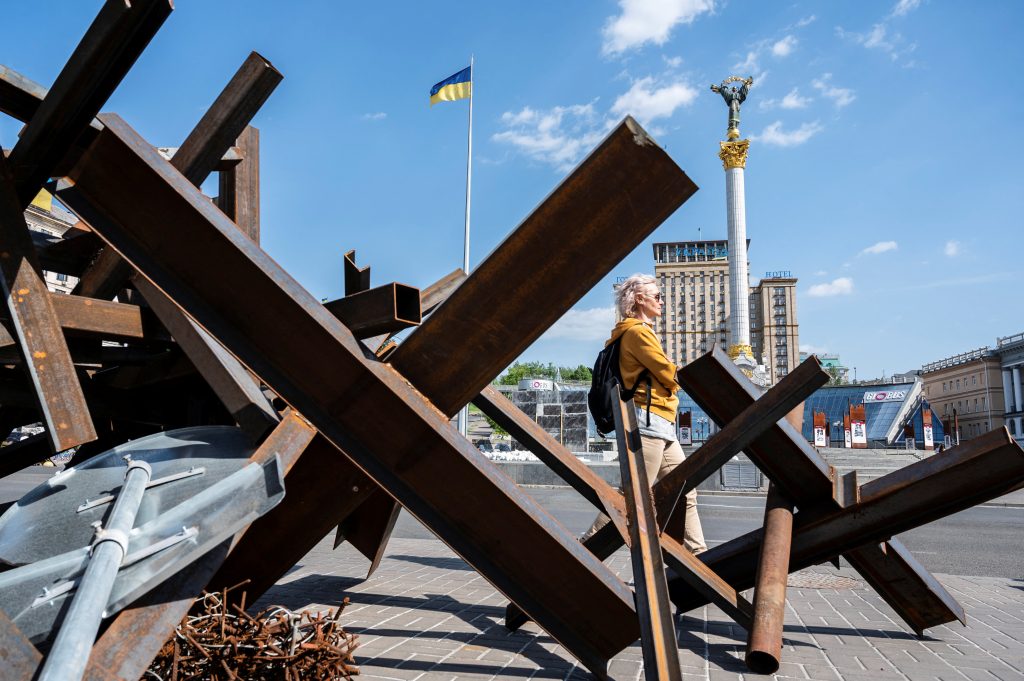 More than two months after I hastily departed Kyiv with my family on the first day of the war, I returned to the Ukrainian capital for a few days from my temporary base in Lviv.

Travelling in wartime Ukraine is no simple task, even in areas far from the front lines. Due to Russian airstrikes on Ukraine’s major oil refineries and storage facilities, petrol has become a precious commodity. You typically have to wait in line for hours to get just 20 liters.

My travel companion and I therefore decided to take the train from Lviv to Kyiv. The overnight journey is comfortable and takes only seven hours. Ukraine’s trains continue to work perfectly well despite Russian attempts to disrupt weapons deliveries by targeting the country’s railway infrastructure. The only problem is that you never know for sure whether your train will become a target.

The Kyiv I encountered on May 7 was radically different to the city I had left behind on February 24. Although more than a month had passed since Russia withdrew its troops from around the Ukrainian capital, there was an unfamiliar air of tension and little evidence of the carefree spring mood that we tend to take for granted at this time of year as Kyiv blossoms into life.

The moment we got off the train, we were subjected to a rigorous document and luggage check by police armed with machine guns. This was not something we’d experienced during the past few months of internal exile in Lviv.

All over the city, you sense the close proximity of war. Kyiv has become a fortress with many concrete checkpoints, anti-tank obstacles, and piles of sandbags still in place. It is obvious that those who remained in the city during the Russian advance were ready to defend every street and every single building against Putin’s troops.

Some of the bridges around Kyiv were blown up by the Ukrainian military to prevent Russian forces from approaching the city. The main bridges spanning the majestic Dnipro River in the heart of the capital are still under heavy guard. It is clear that Kyiv underwent a “total militarization,” as one of my friends put it.

Another striking feature of wartime Kyiv is the absence of cars. The Ukrainian capital is usually one of Europe’s most congested urban areas but now feels like a ghost town. In terms of traffic levels, Kyiv has probably returned to the Soviet days of the 1980s when only the privileged few could afford the luxury of a car. After years of difficulties finding a free space, it is now possible to park virtually anywhere you like.

Public spaces are also noticeably quieter. The beautiful riverside park close to my home is typically packed during sunny spring days, but all the people who used to annoy me with their scooters and bicycles and skateboards and dogs are now gone. Instead, the silence is deafening. The most jarring difference is the almost total absence of children. There are no mothers pushing prams or noisy gangs of kids running around. Kyiv seems older and infinitely lonelier without them.

Whenever I share my impressions of wartime Kyiv with those who stayed in the city during the dark days of February and March, I sense a certain irritation as if I am exaggerating the current situation and underestimating the hardships they went through. They typically respond that there are now ten times more cars on the streets than back then and far fewer checkpoints or military patrols than a month ago.

Maybe they are right. My visit caught the city somewhere between a full-scale war footing and recovery. Throughout Kyiv, there are signs that the city is coming back to life. Almost all the coffee shops along the Dnipro River embankment are now open for business. Restaurants cannot serve beer or wine after 4pm, but most are also now welcoming diners once again. The daily curfew has been relaxed and public transport is increasingly frequent.

Meanwhile, the steady flow of returnees continues. During the peak of the fighting near Kyiv, only 10 of the 120 apartments in my residential building remained occupied. The figure now is 45. This snapshot appears to be representative of the bigger picture for Kyiv as a whole. According to Kyiv Mayor Vitaliy Klitschko, mobile phone data indicated that throughout March the population of the Ukrainian capital dropped from a pre-war total of 3.5 million to around one million people. By early May, this figure had risen to 2.2 million. Every day, thousands more people return.

I reserved one day of my Kyiv trip for the unpleasant task of travelling to our family summer house in the suburbs north of the city. This region was the scene of heavy fighting for around a month, with Russian troops occupying many of the surrounding villages as their Kyiv offensive stalled. I already knew that all 252 houses in our village had been looted by the Russians, but I wanted to see the scale of the damage for myself.

In the weeks following the Russian retreat, I had heard numerous accounts from neighbors of how their homes had been completely pillaged. In many cases, the Russian soldiers had left piles of human excrement in the center of the living room, so I was prepared for the worst.

Surprisingly, our house did not display too much evidence of Putin’s “special military operation.” The Russians had broken the front door and turned everything upside down in their hunt for valuables, but we do not keep any jewelry or money at our summer home so they were out of luck. An empty iPhone box was discarded on the floor in apparent frustration. Sadly for them, the phone itself was with me.

My uninvited Russian visitors left cigarette butts everywhere, including on the wooden staircase, so I am probably lucky they didn’t burn the house down. Curiously, they did not drink an expensive bottle of champagne which remained untouched in a gift box.

After checking the property, I concluded that the Russians had taken almost nothing. I later realized why. By the time they broke into our home, their vehicles were already overloaded with loot from other nearby villages. One resident from a neighboring village explained that as the Russians retreated, they loaded up their armored personnel carriers with everything from household appliances to fur coats and carpets. Indeed, they were so preoccupied with pillaging that they left three trucks full of ammunition behind that were later handed over to the Ukrainian military.

The damage in my village as a whole was far less than the destruction elsewhere. One of my neighbors was killed by the Russians as he was attempting to drive away, but none of the houses in the village were burned down or destroyed in the fighting. The neighboring village of Bogdanivka was far less fortunate. Russian troops shot dead more than forty people, raped many of the women, and destroyed around one-third of all the homes.

The world now knows the names of Kyiv suburbs like Bucha and Irpin due to shocking evidence of Russian war crimes uncovered following liberation. However, international audiences have yet to learn about the dozens of other towns and villages that suffered similar Russian atrocities and barbarism.

As I left my village, many residents were busy repairing roofs and mending fences. They were clearly eager to put the horrors of the Russian occupation behind them and get rid of anything that might serve as a reminder of that nightmare period.

It is possible to encounter similar scenes throughout Kyiv region these days as the Ukrainian spirit shines through the long shadows of war. My trip to Kyiv convinced me that I am now ready to return to the Ukrainian capital on a more permanent basis. Sadly, it is still probably too early for my wife and kids to come home.

Will Putin use chemical weapons in Ukraine?

Fears are mounting that Vladimir Putin may seek to save his failing Ukraine invasion by deploying chemical weapons, but there are reasons to believe that the Russian army is not capable of biological warfare.