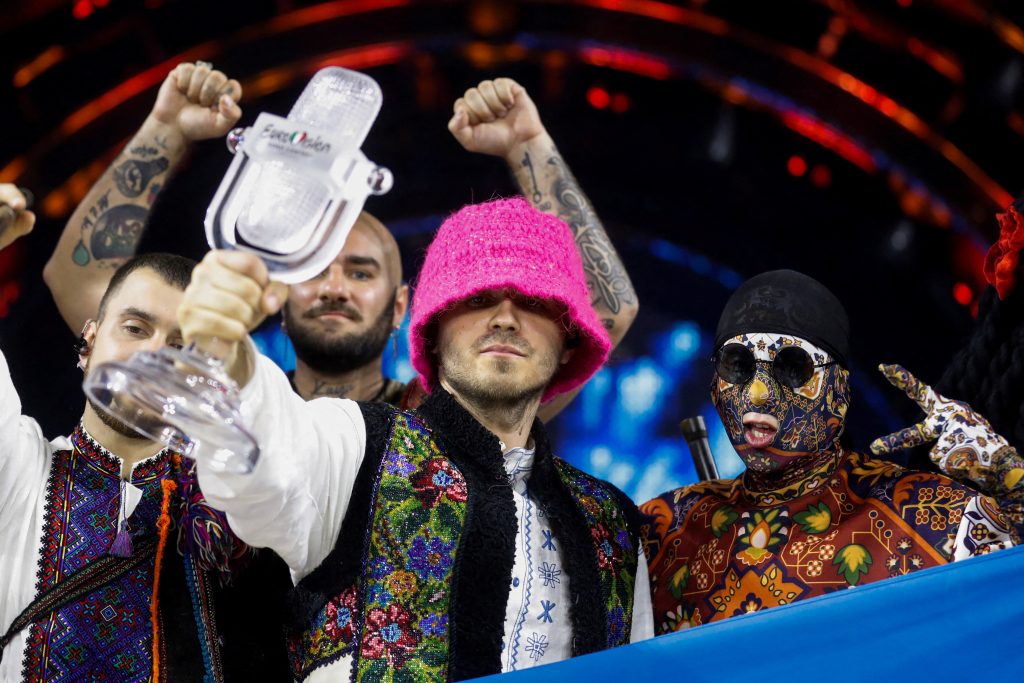 Ukraine won the 2022 Eurovision Song Contest in Turin on May 15, with massive support from the telephone-voting European public helping secure a convincing victory. Ukraine’s folk-rap entry “Stefania” by Kalush Orchestra took first place in the annual song contest ahead of the United Kingdom, Spain and Sweden.

Ukraine’s triumph did not come as a surprise. The Ukrainian entry had been widely tipped for success in the buildup to this year’s contest and was the clear favorite going into Saturday’s final, with European audiences expected to demonstrate their solidarity with Ukraine and opposition to Russia’s unprovoked invasion of the country. This turned out be an entirely accurate forecast as Ukraine’s landslide victory in the phone voting section of the contest catapulted the country to first place.

Ukraine’s victory sparked mixed reactions on social media, with many critics bemoaning the “politicization” of Eurovision. Others offered their congratulations while also acknowledging the wider geopolitical context behind Ukraine’s win. “It is a clear reflection of not just your talent, but of the unwavering support for your fight for freedom,” tweeted British Prime Minister Boris Johnson.

This was Ukraine’s third Eurovision triumph. Over the years, the country’s progress at Europe’s annual song contest has mirrored Ukraine’s broader emergence on the international stage.

Ukraine did not even participate in Eurovision until 2003, reflecting a preoccupation with domestic difficulties during the early years of post-Soviet independence. The country’s first Eurovision victory came in 2004 with Ruslana’s iconic “Wild Dances.” At a time when Ukrainian success stories were in desperately short supply, Ruslana’s win provided the entire country with confidence boost and fuelled an unprecedented surge in patriotism that would have dramatic consequences for the country’s political climate.

Less than six months later, millions of Ukrainians took to the streets to oppose a rigged presidential vote and demand a European future. Ukraine’s Eurovision win did not directly trigger the Orange Revolution, of course, but it is difficult to imagine this landmark event in post-Soviet history without the timely boost to Ukrainian national pride provided by Ruslana’s inspirational achievement.

Ukraine would have to wait more than a decade for its next Eurovision triumph but the country managed to establish itself as a heavyweight song contest contender over the intervening years. By far Ukraine’s most memorable entry during this period was cabaret drag act Verka Serduchka’s glorious 2007 effort. For many fans of the song contest, this was quite simply peak Eurovision.

Everything from the singer’s “human disco ball” costume and playfully political chorus of “Russia Goodbye” to the song’s infectious Eurotrash beat and nonsense mishmash of English and German lyrics made Verka’s entry the quintessential Eurovision performance. It showcased the rising self-assurance of Ukraine as a nation with the confidence to laugh at itself and the savvy to appreciate the kitsch ethos that defines Eurovision. Verka was ultimately beaten into second place by Serbia, but the song has since been widely recognized as the best entry never to win the contest.

The impact of these early Eurovision appearances meant that Ukraine began taking the song contest far too seriously. By the late 2000s, the annual Eurovision selection process had evolved into one of the highlights on the Ukrainian showbiz calendar, attracting the biggest star names and generating months of headlines as the nation subjected each candidate to the kind of scrutiny more typically reserved for key ministerial appointments.

The 2014 Russian seizure of Crimea and invasion of eastern Ukraine brought the country’s Eurovision bandwagon to an abrupt halt, with the authorities deciding in early 2015 not to enter that year’s song contest. Ukraine returned to Eurovision one year later as a battle-hardened nation intent on weaponizing the contest to refocus international attention on Russian aggression.

The result was arguably the most overtly political Eurovision victory to date. Ukraine’s winning 2016 entry was a powerful ballad called “1944” performed by Crimean Tatar diva Jamala. Officially inspired by the WWII-era Soviet deportation of the Crimean Tatars, it was a thinly-veiled protest song designed to highlight the contemporary Russian occupation of Crimea and Putin’s ongoing hybrid war against Ukraine.

With Europe’s largest conflict since WWII still raging in Ukraine, Ukrainians will not have much time to dwell on the significance of their nation’s latest soft power success story. Nevertheless, it serves to underline Ukraine’s complete dominance over Russia on the information front.

Ukraine’s 2022 Eurovision Song Contest triumph clearly owed much to the prevailing mood of public sympathy across Europe. At the same time, it also indicates the continued strength of international support for Ukraine while reflecting widespread admiration for the country’s courageous resistance.