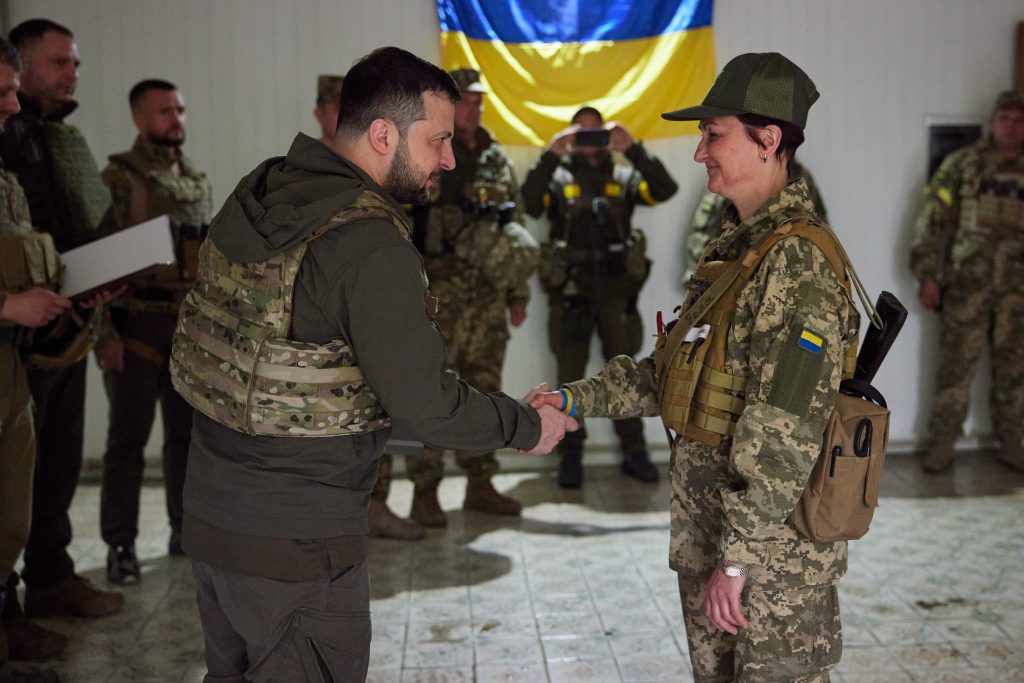 As international audiences have become increasingly familiar with the Ukrainian armed forces during the past three-and-a-half months of war with Russia, one of the aspects to attract most attention has been the large number of servicewomen within Ukraine’s ranks.

Tens of thousands of Ukrainian women are currently serving in the Ukrainian military, representing a significant portion of the country’s expanded wartime armed forces. Ukraine’s large contingent of female soldiers are highly respected and fully integrated, performing combat duties and serving as commanders.

Millions more Ukrainian women have volunteered to provide support for the army and the civilian population as the country has pulled together in opposition to the Russian invasion. Footage of ladies cooking, sewing and delivering aid to soldiers on the frontlines has become commonplace, while videos have gone viral of individual grannies berating hapless Russian soldiers.

While women remain relatively underrepresented in Ukrainian politics compared to some neighboring European countries, female Ukrainian MPs and government officials have been highly active since the outbreak of hostilities on February 24, travelling to Western capitals and engaging with the international media to put their country’s message across.

With Ukrainian males aged 18 to 60 unable to leave the country due to the introduction of martial law, Ukrainian women have also taken the lead in coordinating aid and support for the massive wave of refugees fleeing the war.

The prominent role being played by Ukrainian women in the current war effort reflects longstanding traditions of feminism and notions of gender equality that have deep roots in Ukrainian society.

In traditional Ukrainian communities, women often faced restrictions in terms of their right to study, divorce, or protect themselves against domestic violence. However, this began to change in the nineteenth century when the first vestiges of a Ukrainian feminist movement emerged alongside the country’s broader national awakening.

At the time, Ukrainians found themselves living in two foreign empires: the Russian Empire and the Habsburg Empire. For many of the women leading the push for greater social equality, women’s rights were indivisible from national rights. They sought to be free as women and as Ukrainians.

The early decades of Ukraine’s feminist awakening are difficult to trace due to restrictions imposed by the czarist authorities banning the use of the Ukrainian language in print and prohibiting the staging of plays or lectures in Ukrainian. Indeed, the first comprehensive history of the women’s movement in Ukraine did not appear until 1988 with the publication of Martha Bohachevsky-Chomiak’s “Feminists Despite Themselves” in the United States.

Women’s rights activism in the second half of the nineteenth century often focused on the practical matter of addressing poverty among young Ukrainian women who found themselves either orphans or widows. Schools offering vocational training were established with backing from the Ukrainian Greek Catholic Church.

Pioneering Ukrainian feminist Natalia Kobrynska was the daughter of a priest from western Ukraine. She was to play a key role in one of the landmark events in the emergence of the women’s rights movement in Ukraine. In 1887, Kobrynska served as co-publisher of “The First Wreath” together with Kyiv writer Olena Pchilka. This women’s almanac brought together a range of articles on feminist issues along with works of literature by prominent female Ukrainian writers such as Lesia Ukrainka.

With an all-female cast of contributors and a pair of female publishers, this was a groundbreaking event not only for Ukraine but for the wider European feminist movement. It was doubly noteworthy as the leading lights behind “The First Wreath” united the two Ukrainian communities living under Habsburg and Czarist rule. This collection of writings remains an important milestone in Ukrainian literature and stands as testament to the progress made by the Ukrainian women’s rights movement during the nineteenth century.

At around the same time as the publication as “The First Wreath,” Ukraine also witnessed the establishment of the country’s first women’s unions. Decades later in 1917, Milena Rudnytska created the Union of Ukrainian Women. Following the collapse of Ukraine’s short-lived statehood bid in 1921, the first ever Ukrainian Women’s Congress took place in Ivano-Frankivsk in 1934, which at the time was part of Poland.

While these organizations were primarily interested in women’s rights, they also played a significant part in the wider struggle for an independent Ukrainian state, helping to preserve traditional Ukrainian culture and language while fighting for equality.

This struggle is perhaps most powerfully depicted in the Oksana Kis book “Survival as Victory: Ukrainian Women in the Gulag” published by the Harvard Ukrainian Research Institute. This emotionally draining account explores how Ukrainian women supported each other against the horrors of the Soviet camp system and highlights their struggle to defend themselves as women and as Ukrainians.

Today’s generation of Ukrainian women now find themselves confronted with new horrors as Vladimir Putin’s invading military destroys entire towns and cities while committing atrocities against the civilian population. Since the invasion began in February, women have suffered terribly from Russian war crimes including widespread instances of sexual violence. Amid the carnage, the courage and defiance demonstrated by countless Ukrainian women has inspired the world. Their strength is part of a rich feminist tradition that continues to play a vital role in Ukraine’s nation-building journey.

Image: President Zelenskyy awards a female Ukrainian soldier during a May 2022 visit to the front lines in Kharkiv. (president.gov.ua)