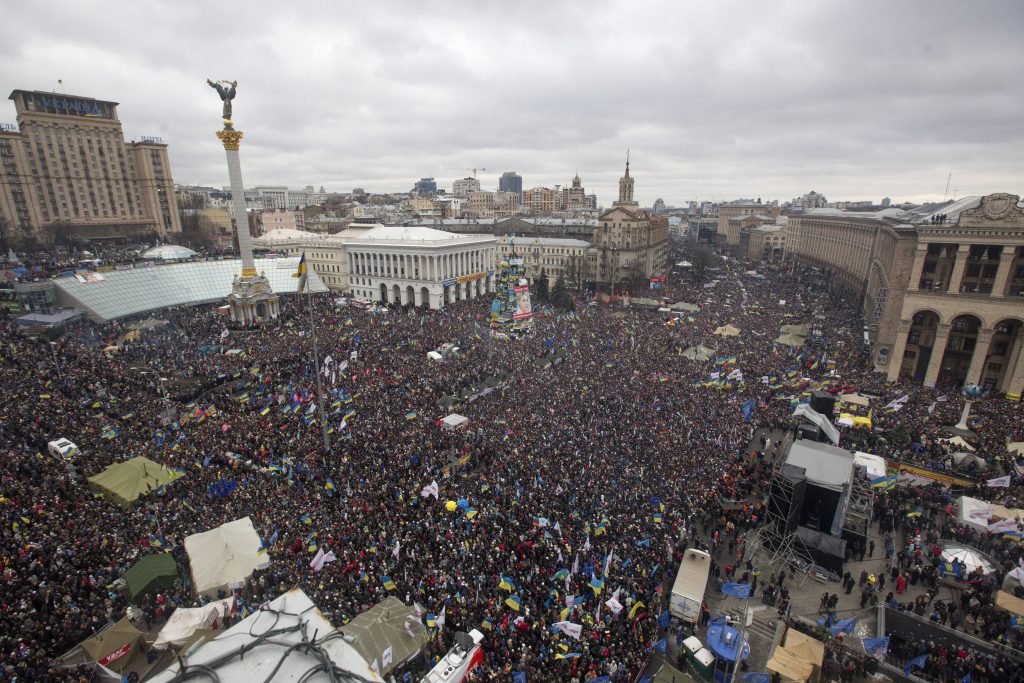 The protest movement that rocked Ukraine in winter 2013-14 has come to be recognized as a consequential event in modern European history. Known as the Euromaidan Revolution or the Revolution of Dignity, the uprising was immediately followed by a Russian invasion that has plunged Ukraine into more than seven years of conflict and left relations between Russia and the Western world at their lowest ebb since the end of the Cold War.

Given the centrality of Ukraine’s protest movement to the subsequent geopolitical confrontation between Moscow and the democratic world, it is no surprise that the Euromaidan Revolution has become a key focus of national and international controversy.

Inside Ukraine itself, the legacy of the Euromaidan Revolution remains far from settled. The protests were post-Soviet Ukraine’s second major national upheaval following the 2004 Orange Revolution, and are part of an even broader tradition of large-scale Ukrainian political protests stretching back to the final days of the USSR.

But while Ukrainian society has repeatedly demonstrated its ability to mobilize, the country have been less successful at achieving fundamental change through protest alone. Many believe this has also been the case following the historic events of 2014, with little sign of landmark breakthroughs against Ukraine’s chronic problems of corruption and injustice. Meanwhile, the ongoing conflict with Russia and the information war accompanying these hostilities have served to further complicate attitudes towards Euromaidan.

What place should the events of winter 2013-14 occupy in Ukraine’s national narrative? In February 2021, Ukrainian MPs attempted to answer this question by voting for a parliamentary resolution recognizing Euromaidan as a “key moment” in Ukraine’s nation-building process. The resolution further defined the revolution as an expression of Ukraine’s “national idea of freedom.”

This resolution was significant as it was the first such attempt by MPs to put Ukraine’s second post-Soviet revolution into a clearly defined historical context. However, it was not entirely unprecedented, and followed on from a number of measures introduced over the past seven years as part of efforts to manage the memory of Euromaidan.

Petro Poroshenko, who won the Ukrainian presidency within weeks of Euromaidan in May 2014, was the key figure behind early initiatives to define the place of the revolution in Ukrainian history. During Poroshenko’s presidency, February 20 was officially recognized as the Day of the Heavenly Hundred Heroes, which refers to the protesters killed in central Kyiv during the final days of the revolution.

Meanwhile, November 21 was designated as the Day of Dignity and Freedom, marking the starting date of Ukraine’s 2004 and 2013-14 revolutions. These twin dates soon became occasions for officials, relatives of victims, foreign dignitaries, and members of the public to come together in central Kyiv for memorial events.

Commemorative dates and memorials of this nature represent powerful symbolic acts in the life of any nation and play an important role in the creation of a national narrative. The memorial dates established during Poroshenko’s 2014-19 presidency joined the candle-lighting rituals promoted by his predecessor, Viktor Yushchenko, to honor the victims of Ukraine’s 1930s Holodomor terror famine, which was suppressed for decades by the Soviet authorities.

In addition to these annual Euromaidan commemorations, numerous monuments have been established across Ukraine, either dedicated collectively to the Heavenly Hundred or to individual victims killed during the protests. The revolution has also left its mark on the process of decommunization, which began with the impromptu dismantling of Soviet-era Lenin monuments by protesters and was then officially adopted by the authorities in 2015.

Decommunization legislation has led to the renaming of hundreds of cities, towns, and villages across Ukraine, along with countless individual streets and squares. Inevitably, Ukraine now has many Heroes of the Heavenly Hundred streets.

While this symbolism has underlined the broad significance of the Euromaidan Revolution, the national narrative surrounding the events of 2013-14 still requires more concrete foundations.

Since the spring 2019 election victory of President Zelenskyy, official attitudes towards the Euromaidan Revolution have become considerably more ambiguous. In 2020, it was announced that leading Euromaidan activist Tetyana Chornovol would face murder charges relating to her role in the protests. Many saw this as a direct attempt to discredit the revolution and legitimize key Kremlin narratives.

Work on the creation of a flagship National Revolution of Dignity Museum also stalled, with those connected to the project facing investigation for alleged corruption in a move that critics condemned as politically motivated. Zelenskyy has since shown leadership in declaring that work on the museum will resume. However, these apparent efforts to undermine the legacy of the revolution have served to highlight the continuing political significance of Euromaidan memorial initiatives in today’s Ukraine.

The biggest single obstacle any Ukrainian government must overcome if it wants to build an authentic national narrative around Euromaidan is the failure to prosecute those responsible for the mass killing of protesters. The recent parliamentary resolution points to this unresolved bundle of criminal cases and includes a statement demanding that investigations be hastened. At this stage, the lack of prosecutions makes a mockery of memorial efforts and leaves huge question marks over the ability of the Ukrainian judiciary to deliver basic justice.

The parliamentary resolution also calls for raising awareness of the revolution among Ukrainians and the international community. However, it fails to provide a definitive judgment of the Euromaidan Revolution beyond recognizing its significance. This is perhaps inevitable. Political verdicts of historic events are typically delivered decades after they have taken place. Any attempts to evaluate more recent events are typically fraught with problems.

This is doubly true if the events in question are perceived as unfinished. The resolution attempts to underline the relationship between Euromaidan and the subsequent Russian invasions of Crimea and eastern Ukraine. As the conflict with Russia remains unresolved and hostilities continue, this makes it particularly difficult to draw conclusions with any degree of certainty.

There is also some evidence to suggest that Euromaidan occupies an increasingly ambiguous place in the consciousness of the Ukrainian public. According to a 2018 poll conducted by Lviv-based polling agency SocioInform, 27% of respondents reported changing attitudes towards Euromaidan. These Ukrainians had supported the revolution in 2014 but had then come question its value based on subsequent events.

For many, the Euromaidan Revolution was a defining moment in modern Ukrainian history that confirmed the country’s democratic path and European choice. However, competing interpretations of the uprising also continue to enjoy widespread popularity among sections of the Ukrainian public, with some regarding the revolution as undemocratic or preferring to view it primarily within the context of the broader geopolitical struggle for Ukraine.

Perhaps it is simply too soon to establish a single national narrative for this crucial event in Ukraine’s recent past. Emotions are still too raw, and the events sparked by the uprising are themselves still evolving in a dynamic and volatile manner.

Providing the families of victims with justice would be a major milestone on the road towards a clearer picture of Euromaidan’s place in Ukraine’s national story. For now, the revolution may be best understood as a symbol of the unfinished nation-building journey Ukraine began in 1991.

Sofiya Kominko is a graduate of the School of Slavonic and East European Studies at University College London. She currently lives and works in Ottawa.