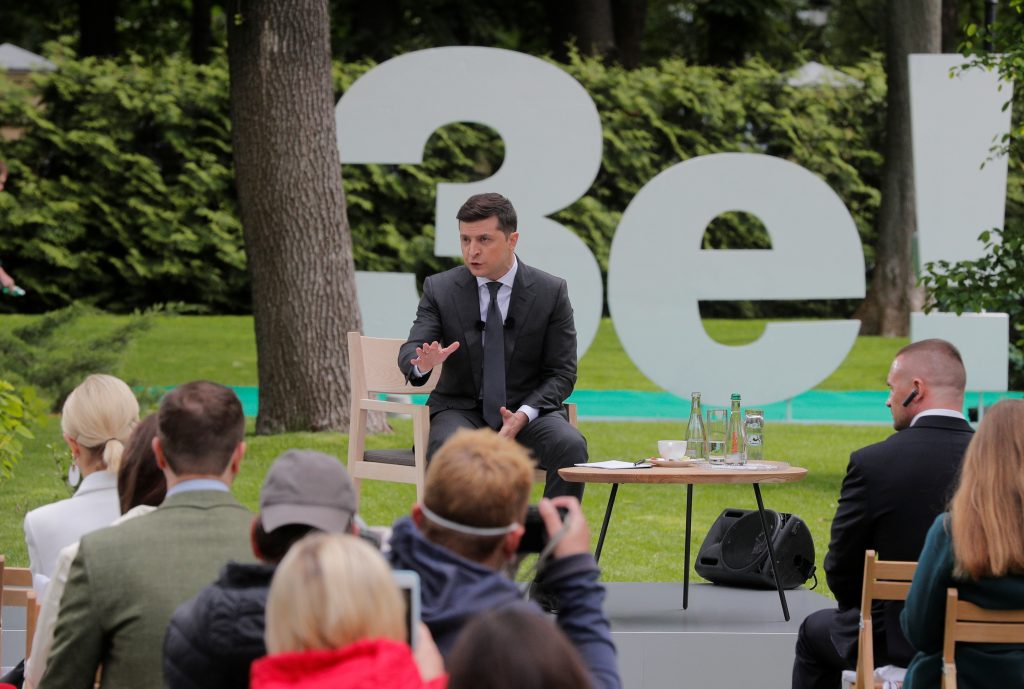 Kyiv’s press pack braved a light spring drizzle on May 20 to gather in the gardens of the Ukrainian president’s official residence for a long-awaited event: a press conference with President Zelenskyy himself. The three-hour Q&A event at Mariyinskiy Palace was held to mark the first anniversary of the Zelenskyy presidency. Notably, it was only Zelenskyy’s second formal press conference in the twelve months since his inauguration in May 2019.

The occasion itself yielded few major surprises. At one point, Zelenskyy appeared to backtrack on his campaign commitment to serve just one term as president and suggested he would be willing to seek reelection in 2024. He also offered dark hints of coming legal troubles for his predecessor Petro Poroshenko. However, the real story of the press conference was that it was taking place at all.

One of the most striking features of Zelenskyy’s first year in power has been his minimal engagement with the mainstream media. This is perhaps doubly surprising given Zelenskyy’s own showbiz background and his efforts to cultivate the image of an everyman alternative to Ukraine’s deeply entrenched (and deeply discredited) political elite. The former TV comedian’s natural charisma and ease in front of the cameras had appeared tailor-made for today’s 24-hour news cycle. Instead, he has emerged over the past twelve months as a somewhat distant figure.

Zelenskyy’s lack of communication with journalists actually predates his presidency and was a prominent feature of the 2019 election campaign. As the presidential race unfolded, his reliance on social media posts, YouTube videos, and broadcasts of a hit TV show in which he starred as the fictional president of Ukraine earned Zelenskyy the label of virtual candidate.

This inaccessibility has not gone unnoticed. On the contrary, media industry representatives have repeatedly criticized the Ukrainian president for allegedly avoiding awkward questions and accused him of shying away from all but the tamest of grillings. Complaints of this nature first surfaced over a year ago during the final week of the 2019 presidential election campaign, when a group of around 20 Ukrainian media outlets penned a joint appeal to Zelenskyy calling on him to finally speak with the press. “Our readers, viewers and listeners are asking questions we cannot answer since we have not once talked with you directly,” they complained.

Little has changed since Zelenskyy took office. Following his inauguration in May 2019, it took Ukraine’s new president over four months to hold his first press conference. He then somewhat overcompensated by staging a record-breaking press marathon in October 2019 that began at 10am and continued until beyond midnight, with around 300 journalists asking the Ukrainian president a total of over 500 questions. This spectacular feat earned Zelenskyy plenty of headlines, but the novelty factor of the marathon itself also served to underline the absence of more routine interaction with the media.

Zelenskyy’s record with the international media has been slightly more encouraging. He has given a number of feature interviews to the likes of Time magazine and the UK’s Guardian newspaper that have garnered considerable international attention. Indeed, his Time interview saw him appear on the cover of the magazine, becoming the first Ukrainian leader to do so.

On the eve of his hotly-anticipated first face-to-face meeting with Russian President Vladimir Putin in December 2019, Zelenskyy held a joint interview with a number of international media outlets including France’s Le Monde, Germany’s Der Spiegel, and Poland’s Gazeta Wyborcza. He has also turned his hand to op-eds, with a contribution recently appearing in the New York Times to mark Zelenskyy’s first anniversary as president.

This international engagement has not been mirrored on the domestic front, where presidential interviews have been few and far between. Low points over the past year have included a bizarre faux interview to mark the first hundred days of his presidency which featured Zelenskyy being gently questioned by Stanislav Boklan, one of his co-stars from the Servant of the People TV show that served as a springboard for the Ukrainian president’s political career.

With little apparent interest in traditional media engagement, Zelenskyy has instead continued to rely primarily on direct communication with the public through his hugely popular social media platforms (the Ukrainian president has 9.5 million followers on Instagram and over 1.1 million followers on Facebook). However, there are signs that this strategy may soon require some revision. A recently published study by Ukrainian media monitoring NGO the Institute of Mass Information indicates that Zelenskyy’s social media posts are rapidly losing their appeal, with video viewing figures on Facebook and Instagram now a fraction of the multi-million audiences witnessed during the 2019 election campaign and the early days of the Zelenskyy presidency.

In a sense, Zelenskyy’s preference for direct social media messaging is a sign of the times. It echoes US leader Donald Trump’s own Twitter presidency and reflects the rising importance of digital democracy elsewhere in the Western world. Indeed, Ukraine’s president can claim to be an innovator in his own right who has taken the trend to new heights. Given the unprecedented success of their social media campaigning strategies in 2019, it is only natural that Zelenskyy and his team should wish to continue in the same vein. Nevertheless, in an emerging democracy like Ukraine where strict state censorship remains a relatively recent memory, a president who shuns the mainstream media is sure to set alarm bells ringing.

A free press plays a vital role in any democratic society, and Ukraine’s flawed but pluralistic media landscape is currently among the freest in the former Soviet Union. The post-Soviet Ukrainian media had once been tightly controlled by the government. This changed with Ukraine’s 2004 Orange Revolution, which proved a watershed moment in the development of the country’s fledgling democracy.

Since 2004, direct government influence over the Ukrainian media has declined dramatically and been supplanted by the private interests of oligarchs who own virtually all of Ukraine’s leading TV channels, radio stations, publications, and online platforms. This has resulted in a highly subjective and partisan media environment which nevertheless provides platforms for most points of view.

By choosing to remain aloof from the Ukrainian media circus, Zelenskyy clearly hopes to maintain control over the messages reaching domestic audiences. This approach also prevents the polished public image of the president from becoming tarnished. Such precautions may be wise. On the few occasions when he has faced challenging questions, Zelenskyy’s often short-tempered responses have suggested a man uncomfortable with criticism and temperamentally ill-equipped to deal with hostile journalists. This makes the president’s lack of media interaction understandable from a strategic perspective.

Nevertheless, Zelenskyy’s reluctance to engage with the mainstream media is a disservice to the Ukrainian electorate that sits uneasily with Ukraine’s democratic ambitions. In a healthy democracy, it is the role of the media to enable dialogue between the government and public while holding the authorities to account. During the first year of his presidency, Zelenskyy has made this task significantly more difficult.

Image: Ukrainian President Volodymyr Zelenskyy pictured during a Kyiv press conference to mark the first anniversary of his inauguration. May 20, 2020. Sergey Dolzhenko/Pool via REUTERS