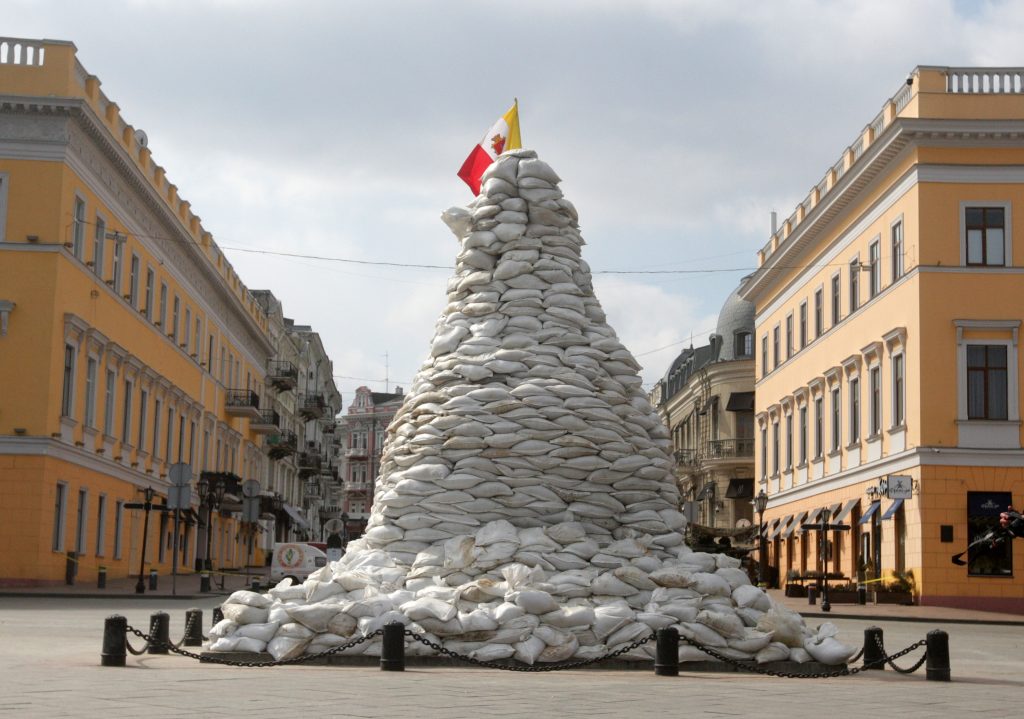 The streets of Ukrainian Black Sea port Odesa are normally bustling in late March as the city prepares for its annual Festival of Humor on April 1. This year is different. With Putin’s war now entering its second month, much of the population has left the city in search of safer locations. Those who remain are busy transforming Odesa into a fortress capable of resisting the full weight of Russia’s invasion force. Sandbags cover many of the city’s most iconic statues and anti-tank obstacles dominate the downtown area.

The battle for Odesa has yet to begin but many believe it could play a decisive role in determining the outcome of the war. As Ukraine’s largest port and gateway to global shipping lanes, control over Odesa is essential as Moscow seeks to break Ukrainian resistance and subjugate the country.

The people of Odesa are clearly determined to defend their city. Famed across the former Soviet Union for their quick wit and distinctive sense of humor, Odesa residents are also immensely proud of their home town and contemptuous of Kremlin attempts to claim this largely Russian-speaking city for itself.

Odesa’s defiance of Putin reflects a broader truth. The Russian ruler often claims to be the champion of Russian-speaking Ukrainians and frequently argues that much of modern Ukraine rightfully belongs to Russia. However, he seems completely unable to grasp that even in Ukrainian cities with strong historical links to Russia where the Russian language still dominates everyday life, there is a growing sense of Ukrainian identity and little appetite for any kind of Russian reunion.

Putin’s mistaken belief that Russian-speaking Ukrainians were essentially Russians who would welcome “liberation” seems to have played a major role in his decision to invade Ukraine on February 24. It is now clear that this was a disastrous miscalculation. Far from greeting advancing Russian troops with cakes and flowers, the Ukrainian military and Ukrainian society as a whole have offered fierce resistance. This has resulted in catastrophic Russian losses in terms of both men and machines.

This is not the first time Putin and his inner circle have fallen into the trap of believing their own propaganda regarding the alleged loyalties of Russian-speaking Ukrainians. Back in spring 2014, Moscow sought to mobilize Ukraine’s Russian-speaking communities in a series of Kremlin-orchestrated regional uprisings designed to undermine the central government in Kyiv and pave the way for the partition on the country.

Odesa was among the main objectives of Russia’s 2014 destabilization campaign and was identified by Kremlin propagandists as one of Ukraine’s three most “sacred” cities together with Sevastopol and Kyiv. However, things did not go according to the Russian plan. Moscow’s plot fell flat in Odesa and other key regional capitals when Russian agents and their collaborators ran into unexpectedly strong local opposition.

To anyone living outside of the Kremlin propaganda bubble, this came as no surprise. Despite strong historical connections to the Russian Empire and a rich tradition of Russian-language culture, today’s Odesa can in no way be considered a Russian city in the sense implied by Putin. Instead, it is a proudly and profoundly multicultural city with a unique history and a no less unique population.

Attempts to portray Odesa as a bastion of Russian imperial identity are rendered ridiculous by the colorful contemporary reality of this cosmopolitan Black Sea port. For more than two centuries Ukrainians, Russians, Jews, Greeks, French, Bulgarians, Moldovans, Armenians, and dozens of other nationalities have all called Odesa home.

These diverse communities came together in 2014 to reject Russia’s destabilization efforts. Similar processes are now at work as Odesa prepares to repel a full-scale Russian invasion. Members of the Ukrainian armed forces and territorial defense units are coordinating efforts with civilian volunteers as they face the prospect of possible amphibious landings and an anticipated assault from inland Ukraine.

So far, Russia’s offensive plans have come to nothing. Russian warships cruise menacingly on the horizon but refuse to risk any landings. Meanwhile, Russian attempts to encircle the city by crossing the southern Ukrainian steppe have resulted in a series of costly setbacks in the vicinity of Mykolaiv. Nevertheless, there is a sense throughout Odesa that a fateful battle will soon begin.

There is little evidence of panic in the militarized city. On the contrary, everyone focuses on the task in hand while also displaying flashes of the personality for which Odesa is rightly famous. This mood has been eloquently captured by an orchestra of musicians offering impromptu performances outside the fortified elegance of Odesa Opera House.

Despite the escalating horrors of the wider conflict in Ukraine, there is also considerable confidence on display in Odesa. Rather than discussing when the war will be over, people tend to speak with assurance of the coming victory. The only question is how high the price will be. How many more Ukrainian women and children must be butchered by Russian missiles and artillery shells before this nightmare is over?

There is one thing that everybody in Odesa seems to agree on: old myths about Russian-Ukrainian brotherhood and the alleged pro-Kremlin sympathies of Russian-speaking Ukrainians now belong on the ash heap of history. These longstanding Russian propaganda tropes have drowned in the bloodshed of Moscow’s criminal invasion and will never resurface. Instead, Russian-speaking Odesa watches and waits for the opportunity to hammer another nail in the coffin of Putin’s imperial ambitions.

The Russian invasion of Ukraine was meant to secure Vladimir Putin’s place in history and reunify what Moscow views as the divided lands of historic Russia. Instead, it has killed the myth of Russian-Ukrainian unity.

Image: A monument to city founder the Duke of Richelieu covered by sandbags in Odesa. 18 March 2022. (Photo by STR/NurPhoto)