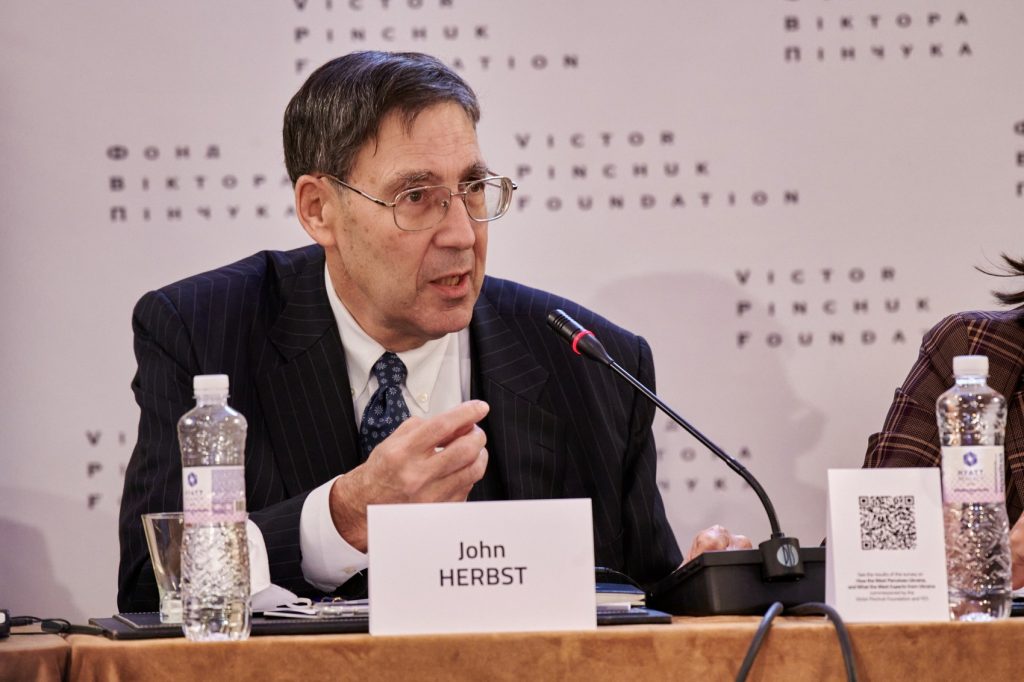 A high-level American delegation arrived in Kyiv on January 30 for a visit designed to demonstrate US solidarity and support for Ukraine as the country faces up to the threat of a potential full-scale Russian invasion.

The delegation’s agenda during what was a whirlwind two-day trip including meetings with President Zelenskyy and a range of other senior Ukrainian politicians and government officials. The centerpiece of the visit was a round table discussion in Kyiv entitled “How to support Ukraine and deter Kremlin aggression.” The event enabled delegation members and fellow participants from the worlds of Ukrainian politics, business, and civil society to exchange ideas on the current security crisis caused by Russia’s menacing military build-up to the north, east and south of Ukraine.

Back in Kyiv for the first time since her controversial spring 2019 departure, Marie Yovanovitch was greeted by round table participants with a warm and spontaneous round of applause. In her opening remarks, she offered a compelling vision of why Ukraine’s struggle against Russian aggression is so important to the United States. “We are supporting Ukraine because it is in our national security interests. It is the smart thing to do and it is the right thing to do. It reflects who we are as Americans, as a democracy supporting another democracy in the face of an authoritarian and increasingly aggressive atmosphere.”

Yovanovitch also warned that the present crisis sparked by Russia’s military build-up on the Ukrainian border would have powerful and potentially dangerous ramifications around the globe. “It is not just a matter of Russia,” she noted. “If we don’t support Ukraine now, we can expect to see a lot more aggression elsewhere. Many other authoritarian regimes are watching and weighing up the West’s response. The outcome here in Ukraine will shape the future of the wider world. So the stakes could not be higher for Ukraine but also for the US.”

General Breedlove framed the current confrontation as Russian President Vladimir Putin’s attempt to reassert Russian authority over Ukraine and reestablish Moscow’s Soviet-era sphere of influence throughout Eastern and Central Europe. “This crisis is completed manufactured and completely contrived by Mr. Putin to advance those two goals,” he commented. Breedlove also spoke frankly about the need to avoid repeating the negative consequences of failing to react adequately during earlier instances of Russian aggression in 2008 and 2014. “If you allow bad behavior to stand, you will get more bad behavior. Now is the time to get it right.”

With speculation over Putin’s true intentions dominating the geopolitical agenda, much of the round table discussion focused on Russia’s most likely next moves. Former US ambassador to Ukraine Steven Pifer argued that while Putin himself may still be considering his options, it was time for the West to assume the worst. This was particularly true given the apparent urgency of the issue for the Kremlin, he noted. “Russia senses that Ukraine is slipping irretrievably away. And it is precisely Russian actions that are responsible for pushing Ukrainians away.”

Former US ambassador to Russia Alexander Vershbow echoed the idea that Putin has not yet made the final decision to invade. “Deterrence is still working,” commented Vershbow. “I think Putin is constrained by the direct costs of the invasion itself, whether it’s a large-scale invasion or a smaller one. He has to reckon with the possibility of material losses, human losses, and economic costs. The fact that the Russians are allowing diplomacy to continue suggests they might be looking at some points in the US and NATO responses that might be worth pursuing and could start a path towards deescalation.”

In his closing remarks, delegation head John Herbst sought to position to current Russian military threat to Ukraine in a broader historical context while underlining exactly what is at stake for the United States and the wider international community. “Putin’s objectives go beyond Ukraine. Your fight is our fight,” he stated. “Putin wants to rewrite the international security system. He wants to rewrite basic principles like national sovereignty and territorial integrity.”