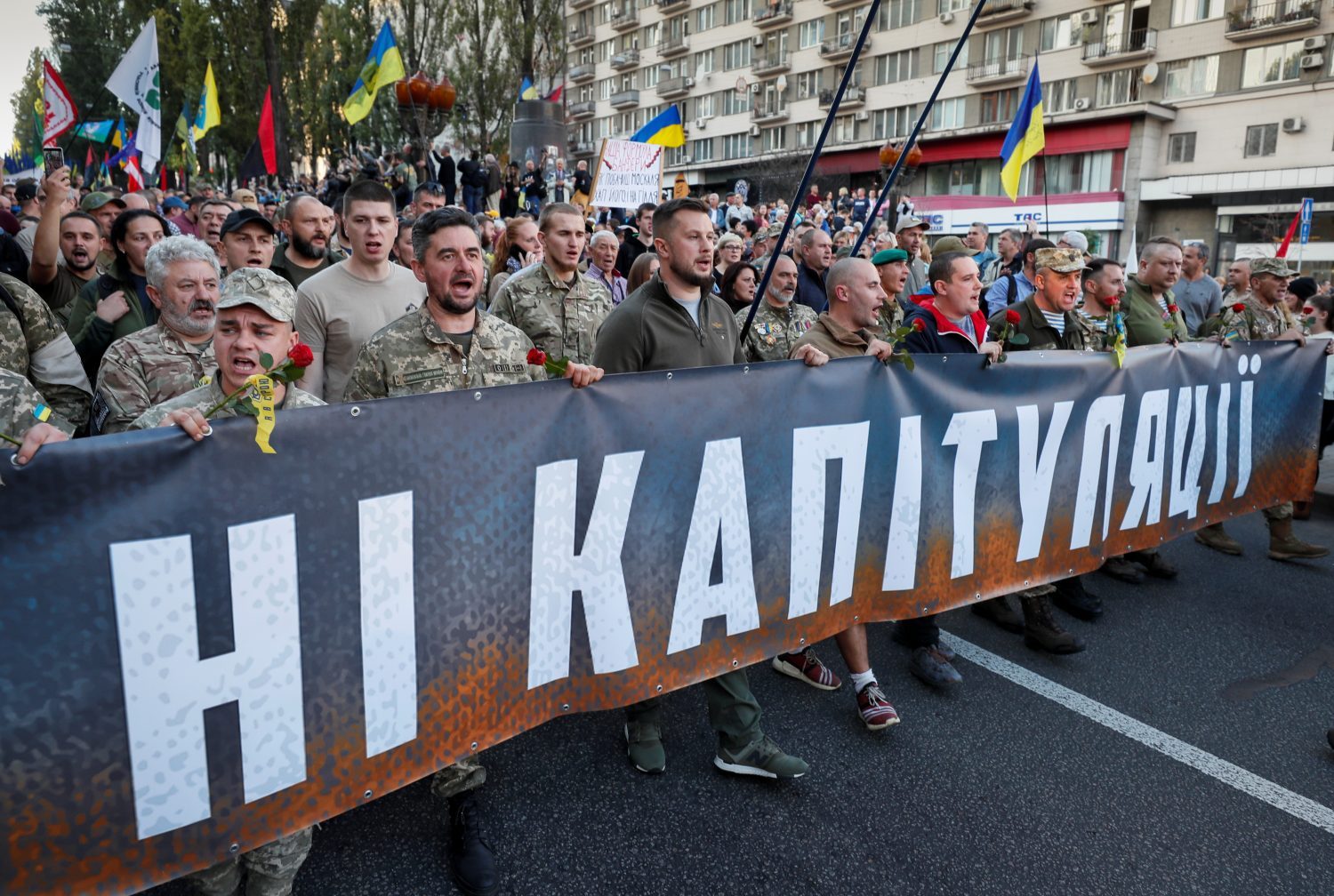 Ukraine agreed to Russia’s pre-conditions for a Normandy Four summit. On October 1, Ukraine signed on to the Steinmeier Formula, which outlines how the law on so-called “special status” for the occupied Donbas will come into force.

After a press conference that was short on details, President Volodymyr Zelenskyy clarified his position two days later. He said Ukraine would adopt a new law on self-governance in the non-government-controlled areas instead of the current one. But the hardest questions remain unanswered: how will security pre-conditions for the elections be implemented? Who will conduct and verify demilitarization and the withdrawal of weapons and troops and control over the border?

Zelenskyy’s announcement was met with massive protests across the country. The truth is he should have known better if he had consulted the polls. Public opinion demonstrates four principles that the president and his team should keep in mind as they seek peace in the Donbas.

1) The demand for peace is not unconditional

Ukrainians want peace and have wanted it for years. July 2019 polls demonstrate that 69 percent of the population is in favor of compromise. However, only 20 percent are ready for peace “at all costs” and 49 percent think that peace should be achieved by negotiations, but not “at all costs.”

2) Society is not ready for painful political concessions

Since 2015, a majority of Ukrainians have not wanted to grant “special status” to the non-government-controlled areas, have not wanted the Russian language to be recognized as a second official language, and have not wanted the occupied territories to have special political and economic relations with Russia or non-bloc status. However, there are regional differences: at the end of 2018 all these compromises looked acceptable for the plurality of respondents in the government-controlled areas of the Donbas. Nevertheless, there are three compromises which are not acceptable all over the country, including the government-controlled areas of the Donbas, which are full amnesty for those fighting against the Ukrainian army, holding local elections in the occupied areas on the militants’ conditions, and the formation of local police, courts, and prosecutors’ offices in the occupied territories exclusively by local authorities.

What compromises do you consider to be acceptable to finish the war in the Donbas?

Confirmation of the Steinmeier Formula has not really changed the numbers. According to an early October poll carried out by the Razumkov Center, 56 percent of citizens define “special status” for the Donbas as an unacceptable compromise, compared to 50 percent in June 2019. The number of people unwilling to consider the refusal of the prospect of NATO membership as a compromise to end the conflict increased from 48.5 percent in June to 54 percent in October. Attitudes toward the official status of the Russian language is the same level as before, and so too is opposition to full amnesty.

For diplomatic negotiations, opinion polls show that security pre-conditions for granting “special status” cannot be limited only to mutual withdrawal of forces. Political decisions on future elections in the occupied Donbas will not be legitimized by a majority, even on the front lines of the Donbas. To the contrary, doing so would significantly raise the risks of domestic destabilization and de-legitimization of the new authorities in Kyiv.

Public opinion is also stable on the subject of reintegrating the non-government-controlled areas into Ukraine. In October 2019,56 percent of Ukrainians want those territories to be returned to their pre-war conditions (that is, without any “special status”), while 24 percent are ready to grant more autonomy to them. Notably, even in the front line Donbas, 50 percent are in favor of pre-war status, while 28 percent favor more autonomy.

Thus, a strong demand for peace and the direct impact of the conflict do not make those who live in the government-controlled areas of the Donbas sympathetic to the most painful compromises, which Russia has been insisting on. Instead, the Donbas could receive the decentralization benefits in the same way as other regions do in the process of decentralization reform.

Ukrainians around the country have been permanently open to horizontal, social, and humanitarian steps toward ordinary people from the occupied territories. Thus, there is no overwhelming hostility toward the locals who stayed beyond the contact line. At the same time, peace at any price is still unacceptable and could lead to destabilization both at the front line and far beyond the Donbas. Public opinion polling is actually a blessing in disguise for the president. While it will likely hold him back from a getting a summit meeting, it gives him every reason to insist on a “security first” formula in future negotiations.

Maria Zolkina is a political analyst at the Ilko Kucheriv Democratic Initiatives Foundation (DIF) and co-founder of the Kalmius Group. Editor’s note: An earlier version of this post was published by Ukraine Verstehen in German.

Image: Veterans and supporters of Ukraine's nationalist movements take part in a rally against the approval of the so-called Steinmeier Formula, in Kyiv, Ukraine October 14, 2019. The sign on a poster reads: "No surrender." REUTERS/Gleb Garanich