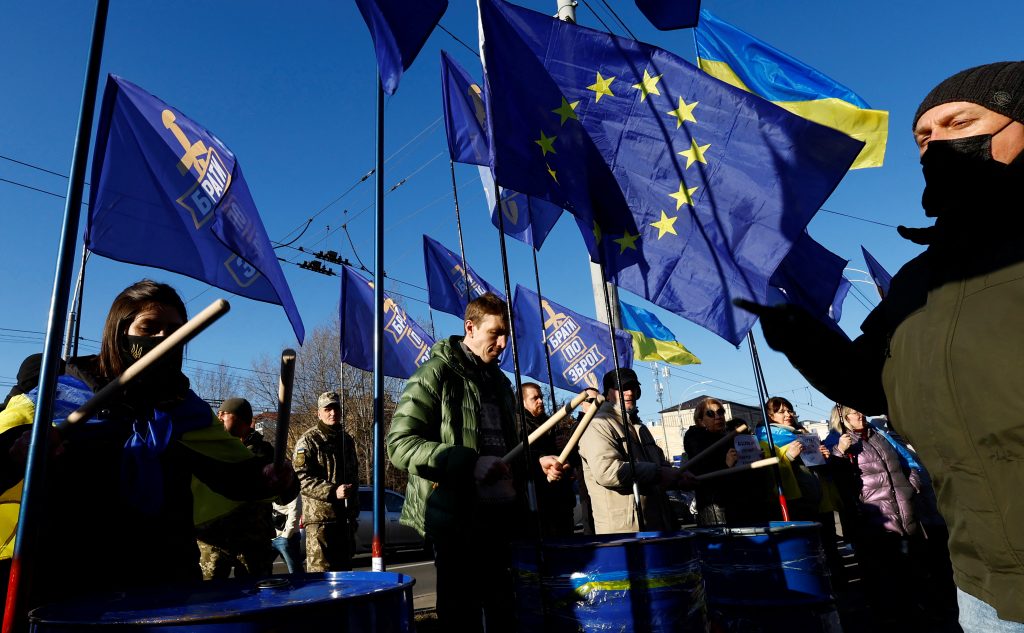 Europe and the West have got much right in supporting Ukrainians’ right to live as they choose. Tougher sanctions are being imposed. But as Russia started a ruthless war of aggression, more is needed.

Europe and the West must answer with firmness and take bold steps to include Ukraine in structures of solidarity of those countries where law, and not brute force, rules.

In these dramatic circumstances, the time has come to offer Ukraine an EU membership perspective.

With NATO membership not currently a realistic prospect, the Western word must also identify alternatives to provide Ukraine with security guarantees.

More robust support with materials for Ukrainians to defend themselves is also needed.

A recent survey commissioned by the Yalta European Strategy and conducted mid-February 2022 shows: Ukrainians want to join the EU (75%) and NATO (64%). At the same time Ukrainians understand that this may happen not now but “at some point in time.”

The poll found that Ukrainians’ wish for NATO membership has been motivated first and foremost to achieve security to prevent Russian efforts to end the existence of a free Ukraine. When asked to state the reasons for backing NATO membership, the top three responses were “it would make Ukraine more secure,” “it would protect Ukraine from Russia,” and “it would allow peace instead of war.”

Ukrainians said in the survey that the most important factor of deterrence is to “strengthen the Ukrainian military to fight for our own territory” (82%).

In this context, it is very important to note respondents‘ readiness to become involved in the defense of their country and put themselves at risk if needed. The result shows impressively that Ukrainians want to live free and will defend themselves. 49% of all adult Ukrainians, every second adult Ukrainian, say they will volunteer to fight or serve in Ukraine’s armed forces if a new Russian offensive happens. 10% are undecided, only 35% said they would not themselves volunteer.

While support for joining NATO has surged in recent years, Ukrainians are ready to consider options if now NATO membership is not on the table. Overall, 84% of respondents expressed an interest in other security formats in absence of a clear way to NATO membership in the nearest future. Almost half (48%) said security guarantees from the US would make Ukraine safer, while the figure for a joint security guarantee from the US and the EU or individual European countries rose to 60%.

The EU should now offer Ukraine a membership perspective. This step cannot be portrayed as an escalation. But it would be a bold, courageous, and meaningful political statement.

This would not be easy; it would demand exceptional leadership from the politicians of EU member states to explain to their domestic audiences why offering an EU membership perspective to Ukraine now is the right decision.

Nor would the accession process be rapid. Existing conditionality and the principles of media freedom, personal freedom, rule of law and the fight against corruption must be upheld.

But today, opening an EU membership perspective for Ukraine can be a game changer. As a sign to Ukraine as well as to the Kremlin.

A discussion of security guarantees for Ukraine is also urgently required. While NATO membership is Ukrainians’ long-term goal, right now Ukrainians need practical proposals that have the potential to deter Russian aggression.

This must be combined with more robust supplies of arms to help Ukrainians prepare to defend themselves.

The terrible war in Europe that started now could claim hundreds of thousands of lives.

The cost and difficulties of the steps we suggest are infinitely lower than the cost of not giving Ukrainians the strongest possible support in this critical moment.

Since its inception in 2004, the Yalta European Strategy has worked to help secure Ukraine’s European future. Russia has started a war against this future. The response should be an EU membership perspective, commitment to tangible security guarantees for Ukraine, and robust support to help Ukrainians defend themselves.

As Russia declares war, Ukraine calls on the global community not to sit on the sidelines and to urgently stand with Ukrainians.