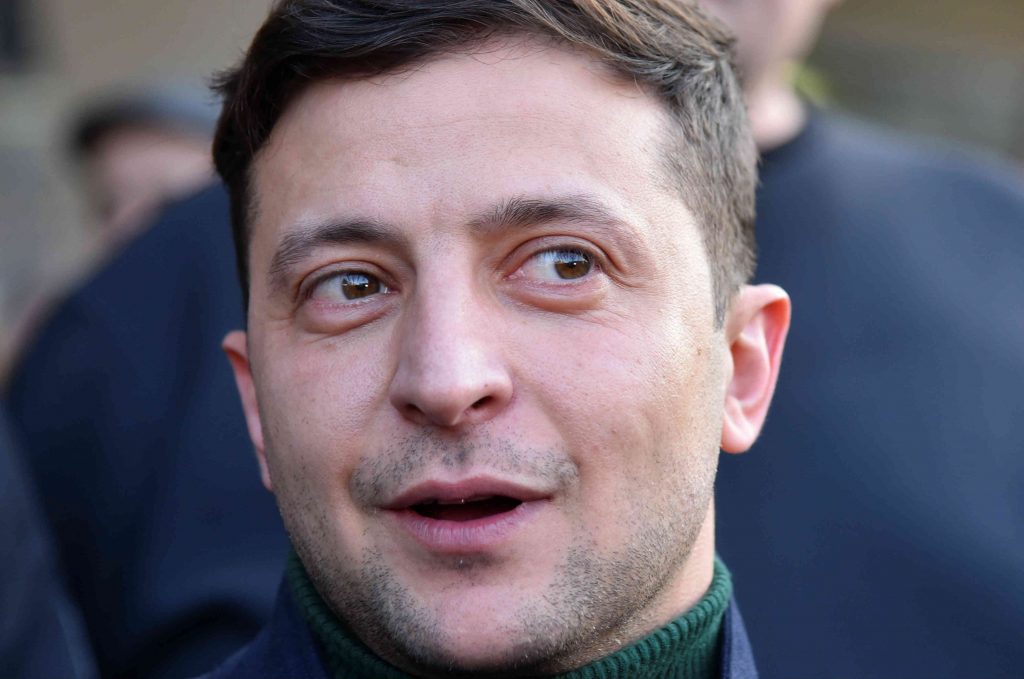 The world is in turmoil, Russia occupies part of Ukraine, reforms in Ukraine still have a way to go, and democracy is in retreat in much of Europe.

One would think Ukrainians would be worried. One would think they would want an experienced person at the helm. Instead, they may be about to elect the 41-year-old television comedian, Volodymyr Zelenskyy, as their next president.

According to the latest poll, Zelenskyy leads in the first round of the ballot scheduled for March 31, scoring 16.4 percent to former Prime Minister Yulia Tymoshenko’s 9.6 and President Petro Poroshenko’s 10.8.  In the second round, scheduled for April, Zelenskyy beats Poroshenko, 39.6 to 18.1 percent, and Tymoshenko, 35.5 to 22.2 percent.

The comedian’s popularity is obviously a symptom of Ukrainians’ wholesale disaffection with their existing political elites, whom they accuse of failing to meet the high expectations generated by the 2014 Euromaidan Revolution. Unsurprisingly, the mostly Russian-speaking Zelenskyy scores well in the southeast and among young people, as both constituencies are most alienated from Ukraine’s elites.

Whatever his supporters’ motivations, electing Zelenskyy would be a disaster for Ukraine. He appears to be a decent person, and few of his publicly expressed views are offensive or egregiously stupid. But the bottom line is that he is completely inexperienced as a politician and policymaker. His only encounter with anything resembling the world of policy has come through playing a reformist president on television. That’s just not enough at such a critical juncture in Ukraine’s—and the world’s—history.

Zelenskyy’s victory would almost immediately have the following deleterious consequences for Ukraine.

First, Ukraine’s relations with the West will atrophy, as Zelenskyy tries to figure out just which Western institutions and policymakers are of greatest importance to his country. Negotiations with the International Monetary Fund, the World Bank, and the European Bank for Reconstruction and Development will stall. Meanwhile, American and European policymakers will put their relations with Ukraine on hold. As will investors, who would be foolish to commit their capital to a country ruled by a comedian.

Second, Ukraine’s oligarchs, who have partially retreated into the shadows in the last five years, will take advantage of Zelenskyy’s inexperience and inability to manage Ukraine’s complicated governmental structures to stage a comeback. So, too, will corruptioneers at all levels of society and state. Ukraine’s GDP will go into decline, its shadow economy will grow, unemployment will rise, trade with Europe will decline, and the brain drain—especially by the young people who elected Zelenskyy—will accelerate.

Third, reform will stop altogether. For one thing, Zelenskyy has no clue as to how societies, economies, and polities change, and it’ll take him a year or two to learn. For another, the bureaucratic and administrative chaos that Zelenskyy’s coming to power will unleash will keep him occupied with maintaining or reestablishing basic order in a crumbling social, political, and economic system.

Fourth, Putin and his minions in the breakaway regions of Ukraine’s southeast will be delighted with Ukraine’s progressive decay under Zelenskyy’s mismanagement. Who better to lead the country they consider a joke than a clown? Who better to fail at coping with a possible provocation in the occupied territories, the Sea of Azov, or mainland Ukraine? Putin will be sorely tempted to launch an armed attack on, say, Mariupol just after Zelenskyy’s inauguration. Perhaps even more dangerous would be a charm offensive that seeks to entrap the naïve Zelenskyy in a set of obligations that amount to Ukraine’s abandonment of its sovereignty.

As if these eventualities weren’t bad enough, it’s quite possible that Ukraine’s parliamentary elections in the fall will produce a deadlocked and fragmented legislature incapable of agreeing on anything. Ukraine would then have the worst of three possible worlds—a weak president and a weak Rada facing immense internal and external challenges.

Another Euromaidan Revolution then becomes perfectly possible, perhaps even within a few months of Zelenskyy’s election. This time, however, it would likely be violent from the start, as Ukraine’s population has an unusually large supply of privately-owned guns and Ukraine’s army would almost certainly side with protestors against the comedian-in-chief. There’s little chance Putin would be able to resist rushing to the aid of his embattled Russian-speaking brethren in what he considers to be Little Russia.

To be sure, these scenarios are the worst that one can possibly imagine. But what makes them terrifying is that, with Zelenskyy as president, they can be imagined with relative ease. In contrast to just about anybody else—whether Poroshenko, Tymoshenko, or former Defense Minister Anatoliy Hrytsenko—as head of state.

When Putin departs, and if Russia ever comes to reject empire building, Ukrainians will be perfectly entitled to elect a clown as their president. Until that time, however, they should realize that leading a country in today’s dangerous world is no joke.

There are other troubling signs on the horizon. Reformers in Kyiv worry that a revanche is underway and civil service, medical, anti-corruption, and fiscal reforms are all under attack.

Image: Volodymyr Zelenskiy, Ukrainian actor and candidate in the upcoming presidential election, reacts while arguing with his opponents, who stage a protest prior to Zelenskiy's concert in Lviv, Ukraine February 8, 2019. REUTERS/Mykola Tys