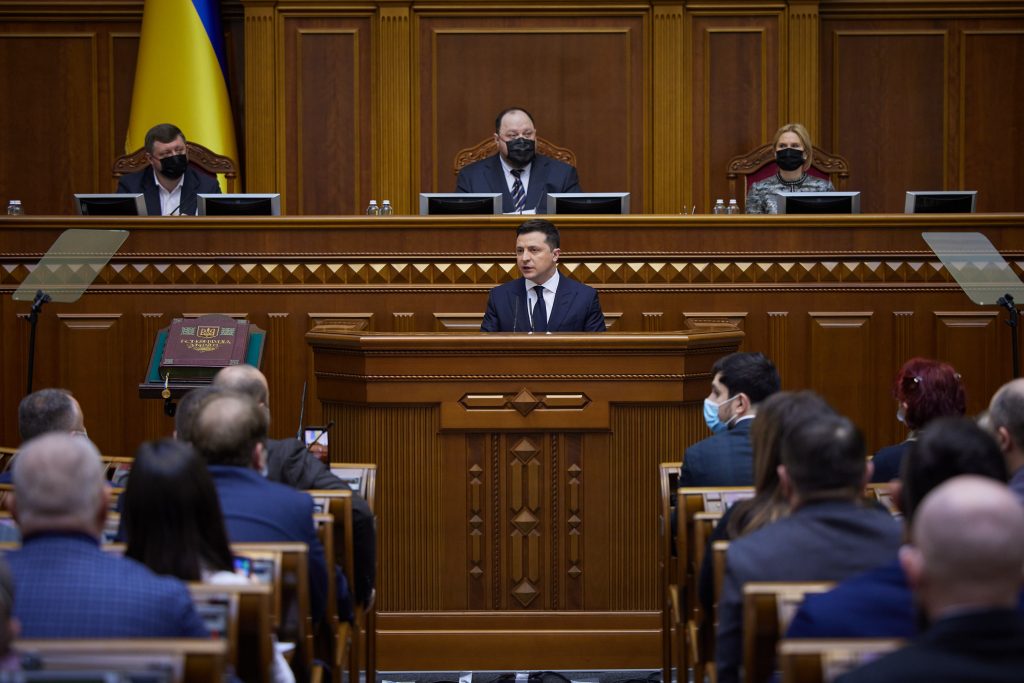 For the past three months, Ukraine has been in the global spotlight amid mounting fears that Vladimir Putin is preparing to launch a dramatic escalation in his eight-year undeclared war against the country. Russia has encircled Ukraine to the north, east, and south with over 120,000 troops while demanding guarantees that the West block Kyiv’s NATO membership bid and effectively condemn the country to the geopolitical wilderness.

With Putin’s thinly-veiled threats raising the prospect of Europe’s largest conflict since WWII, the international community has responded by engaging the Kremlin in an intense diplomatic dialogue while providing Ukraine with urgent deliveries of defensive weapons. Meanwhile, journalists from around the world have flooded into Kyiv as Ukraine has become the leading international news story.

It would be reasonable to assume that Ukraine’s own domestic political agenda has also recently been dominated by the looming threat of a full-scale Russian invasion. However, this is not the case. Instead of mobilizing the country’s many different political forces to unite in confronting the Kremlin, Ukrainian President Volodymyr Zelenskyy has spent much of the past few months pursuing divisive policies that risk weakening the country while strengthening his own grip on power.

One area of concern is the failure to make meaningful progress in much-needed judicial reform. Despite multiple public commitments to advance this key reform, Zelenskyy has been unable to move the long-stalled process forward. The most recent setback came in early February with a third consecutive failed attempt to approve a new anti-corruption prosecutor despite the fact that all the requisite procedural steps were finalized months ago. Critics blame this lack of progress firmly on the Office of the President.

President Zelenskyy’s anti-oligarch law is another indication of a power consolidation that threatens to undermine political competition by granting the president-controlled National Security and Defense Council powers to determine exactly who is an oligarch. Aspects of the law relating to media ownership have grave implications for freedom of speech. Once its comes into force in May 2022, the legislation will potentially allow Zelenskyy to muzzle the Ukrainian media.

There are already alarming signs of unwelcome interference in the information sector. While efforts to combat Russian disinformation are broadly recognized both within Ukraine and by the international community as necessary, there have also been attempts to target individual journalists following criticism of Zelenskyy. Criminal cases against a number of TV channels have also raised eyebrows.

By far the most dangerous development in recent months has been the growing political tension between the current authorities and the country’s opposition forces. In January 2022, former Ukrainian president Petro Poroshenko was charged with treason in relation to the trade in coal from Russian-occupied eastern Ukraine during his time in office.

Poroshenko is Zelenskyy’s main political rival and is widely tipped to run against him in 2024. While specific details of the charges against Poroshenko have yet to be made public, the prosecution of a key competitor for the presidency has been widely condemned as politically motivated.

Other politicians have also been targeted by the authorities. The State Bureau of Investigation (SBI) recently questioned members of the parliamentary grouping tied to former parliamentary speaker and Zelenskyy critic Dmytro Razumkov. Following criticism of Zelenskyy by Holos party, I was recently summoned for questioning by the SBI over party-related activities dating back to 2020.

The timing of these developments is particularly concerning. Why would the president of a nation under siege from a military superpower turn on his domestic opponents? Whatever the motivations behind President Zelenskyy’s policies, his recent actions undermine national security at what is a critical moment for Ukraine.

By taking steps that bring his commitment to Ukraine’s democratic development into question, Zelenskyy also risks weakening the international community’s resolve to support the country against Russian aggression. Ukraine’s international partners have always maintained that their continued backing reflects support for the historic democratic transformation underway in the country. In this moment of acute danger, it is more crucial than ever to demonstrate the credibility of Ukraine’s democratic credentials.

I believe now is the time for all political forces in Ukraine to unite against the threat of a full-scale Russian invasion. We must put aside political squabbles and personal rivalries while we face the challenge presented by Putin and his ultimatums. The national interest must come before any individual agendas.

Unless we are united, Ukraine will not be strong enough to defend itself. Every Ukrainian politician must ask themselves two key questions before making any decisions: Will this unite or divide Ukrainian society? Will this strengthen or weaken the country?

Ukraine has made historic nation-building progress in recent years, but this journey is far from over. Russia is clearly determined to reverse Ukraine’s Euro-Atlantic choice and is seeking to intimidate the international community with the threat of a major European war.

For Ukraine and the wider democratic world, the stakes in the current confrontation could hardly be higher. With the country’s survival as an independent state under threat, Ukraine urgently needs national unity.