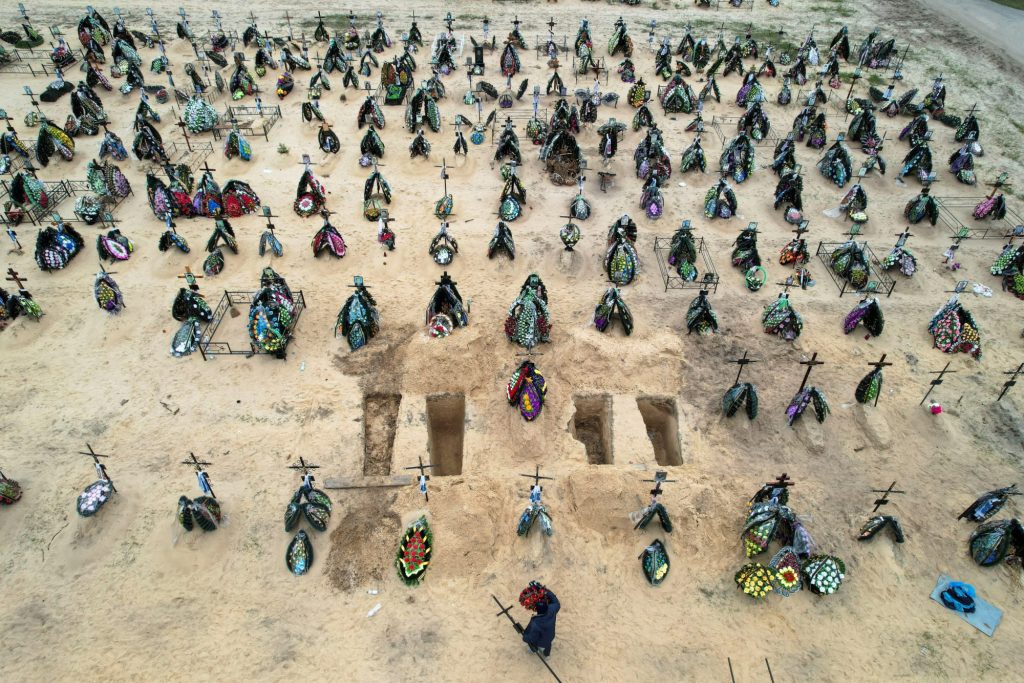 With the Russian invasion of Ukraine now in its tenth month, Ukrainian President Volodymyr Zelenskyy is urging the international community to establish a special tribunal for the crime of aggression in order to prosecute Russia’s political and military leadership. The move reflects concerns that existing international criminal courts will be unable to hold the Kremlin fully accountable for Russian crimes committed in Ukraine.

Zelenskyy reiterated his call for a special tribunal on December 7 during an event hosted in Washington DC by the United States Institute of Peace, the Atlantic Council, and the Ukrainian Embassy. In keynote remarks delivered on Zelenskyy’s behalf by presidential chief of staff Andriy Yermak, the Ukrainian leader stressed that without justice, peace would be impossible. In the context of Russia’s ongoing Ukraine invasion, Zelenskyy defined justice as prosecuting not only those guilty of committing individual war crimes but also “those who gave the order to start this criminal war.”

While war crimes prosecutions typically address how wars are fought, Zelenskyy’s push for a special tribunal seeks to target the people in senior positions who are responsible for unleashing the war. The initiative envisions a special tribunal established specifically to put Russian officials on trial for the crime of aggression against Ukraine. “The crime of aggression is the alpha and omega of the war,” noted the Ukrainian President in his address. “To start a criminal and unprovoked war is to open the door to thousands of crimes committed during hostilities and in occupied territory.”

Zelenskyy’s initiative appears to be gaining international momentum. In recent days, France became the first major Western nation to publicly back the creation of a special tribunal. European Commission President Ursula von der Leyen also stated on November 30 that the European Union will try to set up a specialized court, backed by the United Nations, to “investigate and prosecute Russia’s crime of aggression” in Ukraine.

While the US has yet to adopt an official position on the issue, individual US politicians and commentators have spoken in favor of establishing a special tribunal. Speaking at this week’s Washington DC event, Ukrainian Ambassador to the United States Oksana Markarova noted growing support for the idea of a special tribunal both in the US and in Europe. The Ukrainian diplomat underlined the importance of the initiative for the future of international security. “We need this tribunal for Ukraine, but we also need it for the entire world,” commented Markarova. “If we can hold Putin accountable, we can prevent more wars.”

Fellow panelist Andriy Smyrnov, who serves as Deputy Head of Ukraine’s Office of the President, highlighted the legal barriers that currently prevent the International Criminal Court (ICC) from prosecuting Russia for crimes of aggression. At present, the ICC is only able to address the crime of aggression via referral from the UN Security Council, where Russia has a veto, or if both the aggressor and victim states have ratified the Kampala Amendments to the Rome Statute, which neither Russia nor Ukraine has done. “We have come to the conclusion that the only effective mechanism for holding the Russian Federation accountable for the crime of aggression is the creation of a special international tribunal,” Smyrnov commented.

The exact structure of a possible future special tribunal has yet to be determined. However, most observers agree that in order to gain the confidence of the international community, it would need to involve the United Nations. Former US Ambassador-at-Large for War Crimes Issues David Scheffer told fellow panelists this week that a UN role was “entirely feasible.” Scheffer has a wealth of personal experience to draw on, having participated in the creation of international criminal tribunals for the former Yugoslavia and Rwanda, the Special Court for Sierra Leone, and the Khmer Rouge Tribunal. He also headed the United States negotiating team during talks on the creation of the International Criminal Court.

Scheffer noted that a framework agreement to establish a special tribunal could be reached relatively quickly once the necessary support had been secured from the United Nations General Assembly. “You have to have political will at the UN, and right now you do have that political will,” he commented, pointing to the numerous UN General Assembly votes since the invasion began in February that have overwhelmingly condemned Russian aggression against Ukraine.

The creation of a UN-backed special tribunal may well be technically feasible, but many skeptics continue to argue that Russia’s status as a major world power makes it practically impossible to put senior Russian officials on trial. Ambassador John Herbst, who serves as Director of the Atlantic Council’s Eurasia Center, acknowledged that most previous international war crimes trials have targeted comparatively smaller nations. He also noted that the only trials involving major powers took place following the unconditional surrender of Nazi Germany and Imperial Japan at the end of World War II. While nobody envisages similar circumstances in relation to Putin’s Russia, Herbst said there were a number of reasons why the current push for a special tribunal is nevertheless worthwhile.

One of the most compelling arguments in favor of establishing a special tribunal is the role such an institution could play in exposing the invasion and ensuring Russia’s defeat in Ukraine. Herbst highlighted that in recent weeks, some of the Kremlin’s top propagandists have already begun publicly complaining that senior Russian officials are talking about the possibility of prosecution in The Hague. “This is helping to undermine the morale of the bad guys conducting this war and bringing it to the attention of the entire Russian people,” he commented. Herbst also noted that a special tribunal could create a legal framework to distribute hundreds of billions of dollars in frozen Russian assets to Ukraine as reparations for war damage.