On April 28th, 2022, the Atlantic Council’s Northern Europe office, in cooperation with the US Embassy Stockholm, held the conference “Cooperation in the Arctic: Ways forward in a Changed Security Environment.”

Convening as Russia’s full-scale invasion of Ukraine entered its third month, the future of Arctic governance was in question. Joint research projects on climate change had been put on hold, diplomatic ties in the Arctic Council temporarily paused, local cross-border trade stopped under economic sanctions, and NATO’s northern most borders were about to be reshaped by the expected Swedish and Finnish application to the Alliance.

Swedish Foreign Minister Ann Linde stated in her keynote address that “it is still too early to fully comprehend the wider consequences of Russia’s aggression, but there is a before the 24th of February and an after the 24th of February—including for the Arctic.”  She underlined that “Sweden remain[ed] committed to the Arctic Council as the preeminent forum for Arctic Cooperation” and its partners had an interest in contributing to “sustainable, stable, and a prosperous Arctic.” However, the Arctic’s history of low tension and international cooperation could not be taken for granted. “The global geostrategic situation affects the region,” Foreign Minister Linde said. “The Arctic has resumed its military strategic importance.”

However, even before the war in Ukraine, Arctic governance had been put to the test as the region continued to undergo an unprecedented transformation.

Rising temperatures and melting ice caps had created potential opportunities but also put local societies at risk. Greater access to hard-to-reach resources, such as oil and gas, could grow local economies but increased the risk of environmental disaster. Warmer weather had the potential for year-round shipping but put stress on indigenous livelihoods. Infrastructure development could improve the quality of life for local communities but also be used for military purposes. For every upside of a changing Arctic there was a serious downside.

Given all these challenges, how could Arctic states navigate the changed security environment? The tension between the need for international cooperation and governance, while protecting national interests as great power competition increased, was of central concern. Panelists were split on whether Arctic governance could and should continue as it had before February 24th or if an Ice Curtain would divide the region into a US-European Arctic and a Sino-Russian Arctic.

The Changing Setting in the Arctic

Arctic Ambassador of Sweden Louise Calais described the Arctic as a “donut,” with the eight Arctic states surrounding the Arctic Sea. Each Arctic state had a sovereign right to their portion of the donut. It was the “donut-hole,” the empty space with growing navigational access, where non-Arctic states had an interest in gaining a foothold in the region and challenging the exclusivity and norms of Arctic governance.

The Ambassador made clear that none of the Nordic states have taken Arctic cooperation for granted—it was a conscious choice. Despite the “Arctic Seven” (Sweden, Denmark, Norway, Finland, Canada, Iceland and, the United States) “temporarily pausing participation in all meetings of the Council and its subsidiary bodies” in response to Russia’s invasion of Ukraine, the Ambassador believed it was too early to draw any long-term conclusions about the war’s implications for the Arctic.

The Arctic Security Officer at the US Department of State, Kathleen Larkin, argued that Arctic “exceptionalism,” the notion that the Arctic is a unique region of peace and cooperation unaffected by global security developments, did not exist and never had. Geopolitical threats simply did not disappear north of the Arctic Circle. Low tensions had been a direct result of a strong, rules-based international order. Now, as Moscow and Beijing sought to reshape the international order, Arctic governance was also being challenged. These changing geopolitical dynamics had recalibrated US policy from cooperation and collaboration towards a greater focus on security and great power competition.

Timo Koivurova, Professor of Arctic Governance at the University of Lapland, argued that the thesis of Arctic “exceptionalism” had been tested since 2014. Important to remember, however, was that there were no real dangers arising from the Arctic itself; there were no clear Russian military objectives for the Arctic in and of itself.

Rasmus Bertelsen, Professor of Northern Studies & Barents Chair in Politics at the Arctic University of Norway argued that the Arctic reflect the rest of the world order. During the Cold War, there was an “Ice Curtain” with very little cooperation between Soviet Arctic and the European and North American Arctic. After the collapse of the Soviet Union, Arctic governance reflected American global hegemony. Now, the unipolar moment was coming to an end.

Professor Bertelsen expected the coming global Sino-American polarity to be reflected in the Arctic with an American and European order vs a Russian and Chinese order. The re-establishment of the Ice Curtain was occurring much faster than expected due to a breakdown of the European security order over events in Ukraine. The Arctic Council, the professor argued, “was dead and gone.”

Military Dimensions of the Arctic

From a military-strategic perspective, described Niklas Granholm, Deputy Director of Studies at the Swedish Defense Research Agency (FOI), the Euro-Atlantic Arctic did not stop at 66.33 degrees north but stretched down through the British Isles. For Russia, the nuclear forces on the Kola Peninsula were an existential capability and Moscow had committed significant resources to protect these assets and create a sea-denial zone. Russian naval and military buildup inside the Arctic therefore had affects far beyond the polar circle.

Conversely, Russia’s war in Ukraine had impacted security in the Arctic, said Commander Stefan Lundqvist, Director of Studies & Military Lecturer at the Swedish Defense University. The war had pushed Sweden and Finland towards NATO, with the potential to reshape the alliance’s northernmost border. Moreover, the lack of dialogue on the military and political levels had increased the risk of misinterpretation, unintended escalation, and accidents.

One potential source of conflict was the Northern Sea Route, a heavily fortified and key national interest of Russia. Due to conflicting claims to the route, there was a need to reestablish dialogue from a position of strength, with increased deterrence capabilities and situational awareness. The commander noted, however, that Russia had interfered less in the March 2022 Cold Response exercise than in previous years. There was disagreement on whether this was signaling the intention to maintain low tensions in the Arctic or simply due to a lack of capacity with forces tied down in Ukraine.

In response to increased great power competition in the Arctic, the US, UK, and France had all adapted their Arctic strategies to improve force capabilities and presence in the region, said Anna Wieslander, Director for Northern Europe at the Atlantic Council. The UK, while not an Arctic state, had been playing a more active role as a security provider in the North Atlantic with the West having major interests in safeguarding the GIUK gap, a strategic access point for the Russian Northern Fleet. France, a major European actor but non-Arctic state, had emphasized that any threat to stability and security in the Arctic would affect French interests, such as energy security and access to minerals critical to the high-tech defense sector.

The United States, as an Arctic state and governing member of the Arctic Council, had become increasingly vocal on Russian and Chinese activities and military presence in the region. The US had therefore updated its Arctic strategy, first adopted in 2013, to enhance national and economic security while the Air Force, Navy, and Army had all begun implementing Arctic strategies to improve multidomain operations and deterrence capabilities.

A new security order without Russia was being built, concluded Niklas Granholm.

It had become clear that the Arctic’s future risked becoming both more complicated and uncertain. Just a few short months prior, Petteri Vuorimäki, Finnish Ambassador for the Arctic and Antarctic Affairs, was a staunch defender of constructive cooperation with Russia in the Arctic Council. As late as December, he had taken part in a productive Arctic Council meeting in Russia. Under current circumstances, however, partaking in such meetings was impossible.

The statement made by the Arctic Seven pausing work was carefully constructed and balanced, with the ambassador remaining a believer in the importance of the Arctic Council and the good it has produced since its establishment in 1996: From groundbreaking reports on the impact of climate change to providing the only format for indigenous peoples to be represented in equal partnership with the other nations involved.

If Arctic nations lost sight of the issues of climate change, environmental protection, sustainable development, and indigenous rights, the region would be completely dominated by security concerns, making life in the Arctic very difficult.

For Marie-Anne Coninsx, Senior Associate Fellow at the Egmont Institute and former EU Ambassador at Large for Arctic Affairs, a dual-track approach towards Russia (i.e. cooperating on issues of shared interest while isolating in others) was no longer an option. Moscow could not be relied on for anything, including cooperation on non-sensitive issues such as climate change.

Moving forward, Ambassador Coninsx saw two solutions for the future of Arctic governance. First was to strengthen cooperation between “the willing” (i.e. Western nations). Second was to adapt multilateral forums and international organizations. With the Arctic Council on pause, there was an opportunity to adapt governance structures to include friendly partners. Additionally, NATO and the EU could no longer ignore security on their Northern frontiers.

In the short- to medium-term, the chance of spill-over from Ukraine to the Arctic was very low, argued Chris Skaluba, Director of the Transatlantic Security Initiative at the Atlantic Council. Russia had little capacity to escalate with forces tied down in Ukraine.

More long-term, the situation had changed completely. Recent statements by the US indicated that “there is no way back until Putin is off the stage.” The longer the current standoff went on, the more fundamental the changes would be for the Arctic.  If the conflict lasted another 10 years, for example, the Arctic Council would be “done.”

Ambassador Vuromäki did not agree that everything had changed. Finland still had a 1300 kilometer border with Russia, the Arctic remained existentially important for Russia, and climate change had not disappeared.

The Arctic Council had contributed to the region’s peace, stability, and predictability, said US Deputy Chief of Mission Pamela Tremont. The pausing of the Council’s work had “shaken us to our core,” as the West considered what Russia’s war in Ukraine meant for security structures. Putin could not be allowed use mechanisms such as the Arctic Council to demonstrate that he was a respected leader with status in the world. A clear message needed to be sent to the Russian people over the unacceptability of events in Ukraine and it was simply impossible to go on with business as usual.

“Temporarily paused” was a very deliberate choice of words. It was neither a withdrawal nor an attempt to reconstitute the Arctic Council, but a pause in light of events in Ukraine. The US remained committed to the Arctic Council and would work with like-minded partners to ensure the promotion of indigenous rights and representation, climate research, economic development, and international security cooperation would continue. 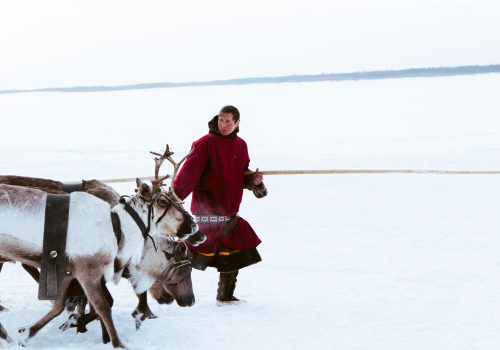 Episode 1: “Living in the Arctic”

Anu Fredriksson, Executive Director for Arctic Frontiers, gives a local perspective on living in the Arctic. Anu is originally from Oulu in Northern Finland and has worked with Arctic issues for over a decade. 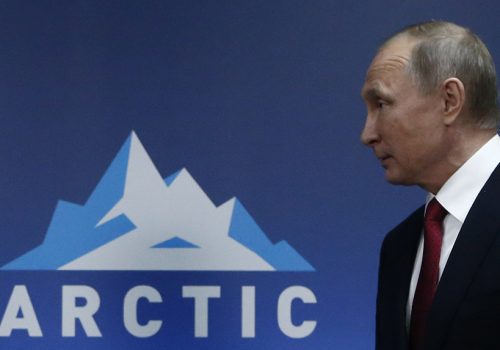 Episode 2: “Russia and the Arctic”

Mathieu Boulègue, Senior Research Fellow for the Russia and Eurasia Programme at Chatham House, takes a closer look at Russia’s deep ties to the Arctic and its posturing in the region. 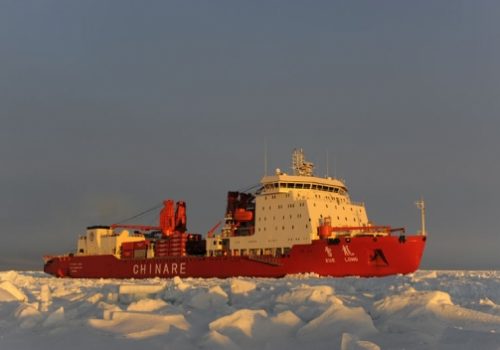 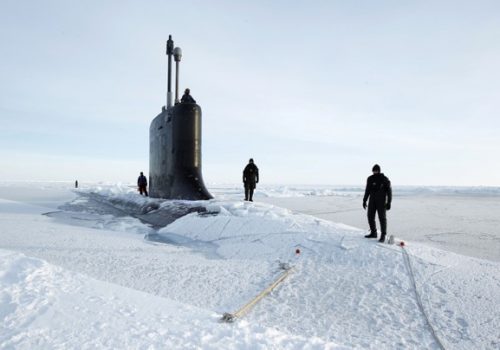 Episode 4: “Military Dilemmas in the Arctic”

Dr. David P. Auerswald, Professor of Security Studies at the U.S. National War College, takes a closer look at military activity in the Arctic and the associated risks of the region’s increased militarization.