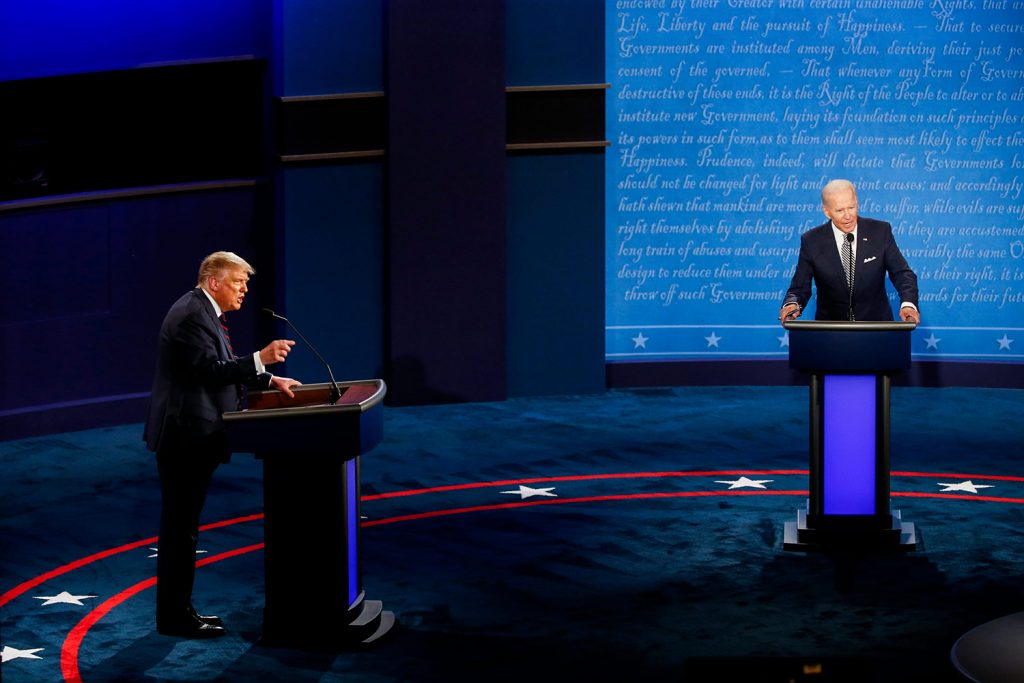 International Monetary Fund (IMF) employees have joked among themselves for years about when the fund’s bylaws would kick in, requiring them to move from Washington to Beijing. Written when no rival to US economic leadership was in sight, the bylaws require that the headquarters be in the world’s largest economy.

The underlying story of this week’s IMF and World Bank meetings, held virtually from Washington, is that democratic capitalism is suffering dangerous new blows and autocratic capitalism is enjoying new gains as a result of this disruptive year of COVID-19 that will strip 4.4 percent of the world economy this year or $11 trillion of output next year.

China, where the pathogen originated, will be the only major economy to post growth this year. The IMF predicted that China, the world’s second largest economy, would expand 1.9 percent in 2020, while the US would shrink by 4.3 percent and Europe by 7.2 percent. China’s growth will accelerate to 8.4 percent next year, said the IMF, compared to 3.1 percent in the United States and 4.7 percent in Europe.

Fixing the problem won’t be easy.

The IMF’s new global debt figures, shown in this Atlantic Council tracker, show US debt will hit 130 percent of gross domestic product (GDP) thanks to the crisis. That’s the highest level since World War II when the country was financing colossal military operations. The US Treasury Department released figures Friday that show a record $3.1 trillion budget deficit in the fiscal year ending September 30.

The Trump administration’s failure to leverage its stimulus spending this year on investment in infrastructure, education, and research-and-development is a missed opportunity. Trade disputes with European and Asian allies have undermined solidarity among global democracies when it has been most needed.

Risks to the dollar’s continued currency supremacy may seem far over the horizon, but concerns have grown more relevant as China seizes first-mover advantage through its rollout of digital currency tests in selected cities.

To be sure, the current IMF voting share still favors the United States by roughly three-to-one, and the bylaws dictate that the “principal office of the fund shall be located in the territory of the member having the largest quota.” Still, even former IMF Managing Director Christine Lagarde in 2017 mused that the fund’s HQ could relocate within a decade.

Current events may accelerate her timeline.

The more significant question than the location of the IMF is what country or set of countries will write the financial and monetary rules for our coming epoch. Will democracies, rallied by the United States, revive and reform their form of capitalism, which has been ascendant for more than seventy-five years?

Or will the future be shaped by China and state-controlled capitalism, which its leaders argue has proved more decisive and resilient in this crisis? Or alternatively, are we entering a period of an extended, global systemic scrum of the sort experienced after World War I that lead to worldwide economic depression, currency devaluations, beggar-thy-neighbor protectionism, a breakdown of the international financial system, and ultimately to war?

In a landmark speech this week, current IMF Managing Director Kristalina Georgieva called what the world is experiencing now a “new Bretton Woods moment,” harkening back to 1944 when the IMF and World Bank were created with a dual purpose: “to deal with the immediate devastation caused by the war, and to lay the foundation for a more peaceful and prosperous postwar world.”

It’s worth reflecting on the enormity of what Georgieva is suggesting, as the original Bretton Woods was the first agreement of its kind, a fully negotiated global monetary order, resting at that time upon gold and the US dollar. Bretton Woods put into place the rules and the wherewithal for the expansion and sustainability of democratic capitalism, which in the end would triumph over centrally controlled, Soviet-style economies.

The deal came near the end of World War II at a time when US leadership was in a visionary frame of mind and had the economic and political leverage to impose its will on others, much in contrast to conditions today. Cordell Hull, the US Secretary of State from 1933 to 1944, represented the view among many of that time that economic discrimination and trade warfare had been underlying causes of both world wars.

Bretton Woods was designed to avoid a repeat of that outcome. After two years of preparation, the United States gathered 730 delegates from all 44 Allied nations at the Mount Washington Hotel in Bretton Woods, New Hampshire, from July 1–22, 1944, before they signed the agreement on its final day.

In the cacophony of the final days of the US presidential election, it would be easy to neglect the historic challenge to democratic capitalism. Few Americans will have heard or read Georgieva’s speech this week, distracted instead by the dueling town halls of President Donald Trump and former Vice President Joe Biden.

Yet whoever is elected on Nov. 3 will be saddled with the task of reversing the slide in public faith for democratic capitalism before it becomes irreversible, and addressing inequalities while at the same time not sacrificing capitalism’s irreplaceable engine of growth and innovation.

What the United States and the world needs following the Nov. 3 elections is another round of transformational American leadership of the brand that followed World War II.

For Trump, taking on this generational challenge in a second term would demand a dramatic change of heart about building international coalitions of the Bretton Woods variety. For Biden, it would require translating his encouraging language on galvanizing global democratic partners, including plans for a first-year summit of democracies, into concrete action that would reverse current trends.

Both candidates talk about emerging stronger from COVID-19, but our problems didn’t start with the virus and they won’t end with a vaccine. Facing a second economic crisis in the space of a decade, the United States has a rare second chance to get things right alongside its democratic partners.

Crafting a blueprint for a revitalized Bretton Woods is one of the founding pillars of our new GeoEconomics Center. As the Center’s Director of Programs and Policy, Josh Lipsky, says, “America must channel the spirit of 1944, and show the world that collaborative economic leadership is the only way to achieve both peace and prosperity.”

If we fail to act, democratic capitalism may not get another opportunity. The stakes are that large.

This week’s top reads hone in on the challenges America and other democracies are facing from China and autocratic capitalism in the age of coronavirus.

From an erosion of human rights across the globe to China’s gambit to reshape the international order, democracies everywhere face new challenges.

At the same time, Chinese leaders have grown more confident of American decline and the need to counter US efforts to slow Beijing’s rise.

Democracy under Lockdown: The Impact of COVID-19 on the Global Struggle for Freedom
Sarah Repucci and Amy Slipowitz​​​ / FREEDOM HOUSE

The pandemic has eroded democracy and respect for human rights
ECONOMIST

“The COVID-19 pandemic has fueled a crisis for democracy around the world,” write the Freedom House authors. “Since the coronavirus outbreak began, the condition of democracy and human rights has grown worse in 80 countries. Governments have responded by engaging in abuses of power, silencing their critics, and weakening or shuttering important institutions, often undermining the very systems of accountability needed to protect public health.” Read More →

Drawing upon this work, the Economist writes, “With everyone’s attention on COVID-19, autocrats and would-be autocrats in many countries can do all sorts of bad things, safe in the knowledge that the rest of the world will barely notice, let alone object.” Read More →

How China Outsmarted the Trump Administration
Anne Applebaum / THE ATLANTIC

The Atlantic’s Anne Applebaum is consistently one of the world’s best scribes tracking threats to democracy and autocratic gains.

She views America’s withdrawal from the World Health Organization as a victory for China and loss to the United States—one of a series of efforts to impose what Chinese President Xi has declared a “new era” of “great power diplomacy with Chinese characteristics.”

Writes Applebaum, “For more than a decade, while we’ve been distracted by other things, the Chinese government has made the gradual rewriting of international rules—all kinds of rules, in many realms, including commerce and politics—one of the central pillars of its foreign policy.”

US negligence and withdrawal, in the case of the WHO (regardless of what you think of the organization), is only helping Beijing.  Read More →

Keep an Eye on Taiwan
Michael Schuman / THE ATLANTIC

Michael Schuman highlights the dangers in a changing world order: America’s defense of Taiwan in the case of a Chinese attack on the island has grown less certain, a resurgent Beijing has become more determined to assert its role as the region’s predominant power, and a greater number of Taiwanese support independence and their own separate identity.

“Taiwan is one of the seams in that system that could split under the strain of this geopolitical confusion,” writes Schuman. “Both Beijing and Washington are tugging more forcefully than they have in decades, driven by political change at home.”

US allies in Asia will be watching Taiwan above all else to take the pulse of Chinese ambitions versus American determination. Read More →

Writing for Lawfare, Scott Moore lists some good reasons why skeptics shouldn’t simply dismiss Xi’s commitment as propaganda. Perhaps most important among them is what his pledge says about China’s commitment to investments in “clean energy technologies, including solar power, electric vehicles and next-generation power grids.”

Watch this space—as China is determined to lead in the technologies of the future. ​Read More →

American leaders, if they are to successfully manage their future relations with Beijing, above all need to better understand what Chinese leaders are thinking about the United States.

“China’s rulers believe that the past four years have shown that the United States is rapidly declining and that this deterioration has caused Washington to frantically try to suppress China’s rise,” writes Julian Gewirtz in Foreign Affairs. “What many Americans see as disruptive effects attributable only to Trump’s presidency are, to China’s current rulers, a profound vindication of their darkest earlier assessments of US policy.”

Gewirtz writes, “The United States can draft a strategy that much more effectively deters China’s most problematic behavior. But to do so, Washington must endeavor to upend Chinese leaders’ assumption that the United States is inexorably declining.” Read More →

PERSON OF THE WEEK

NATO 20/2020: Twenty bold ideas to reimagine the Alliance after the 2020 US election

More than two decades after NATO’s inspired decision to invite former adversaries to join its ranks, the Alliance is in need of equally captivating ideas. NATO must build on its impressive track record of adaptivity, resilience, and achievement.