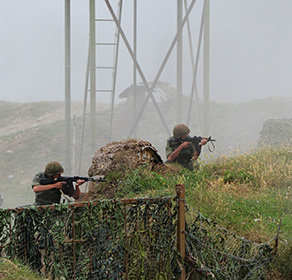 “Since the 1990s, a number of separatist movements and conflicts have challenged the borders of the states of the former Soviet Union and created quasi-independent territories under Russian influence and control,” states Agnia Grigas, a senior nonresident fellow at the Atlantic Council’s Dinu Patriciu Eurasia Center, in the opening of her new report, Frozen Conflicts: A Tool Kit for US Policymakers. In the report, Grigas differentiates between Moscow’s policies toward the breakaway regions of the 1990s, the 2008 Russo-Georgian War, and the annexation of Ukraine’s Crimean peninsula and subsequent war in eastern Ukraine.

“An examination of the development of frozen conflicts and Russia’s continued creation of separatist territories suggests that the past policy responses of the US government to these conflicts have been largely insufficient to deter further aggression,” Grigas argues.

According to her, these frozen conflicts serve Russian foreign policy interests by reasserting the nation’s dominance in regions it views as belonging to its historical sphere of influence. Though called “frozen,” these conflicts can suddenly erupt into active violence, as occurred in mid-2016 in Nagorno-Karabakh.

For American policymakers, creating a strategic approach to these Kremlin policies is crucial to defending and maintaining a free and democratic Europe. Grigas elucidates the policy and security implications of these conflicts and outlines concrete policy recommendations to strengthen the US response to frozen conflicts.