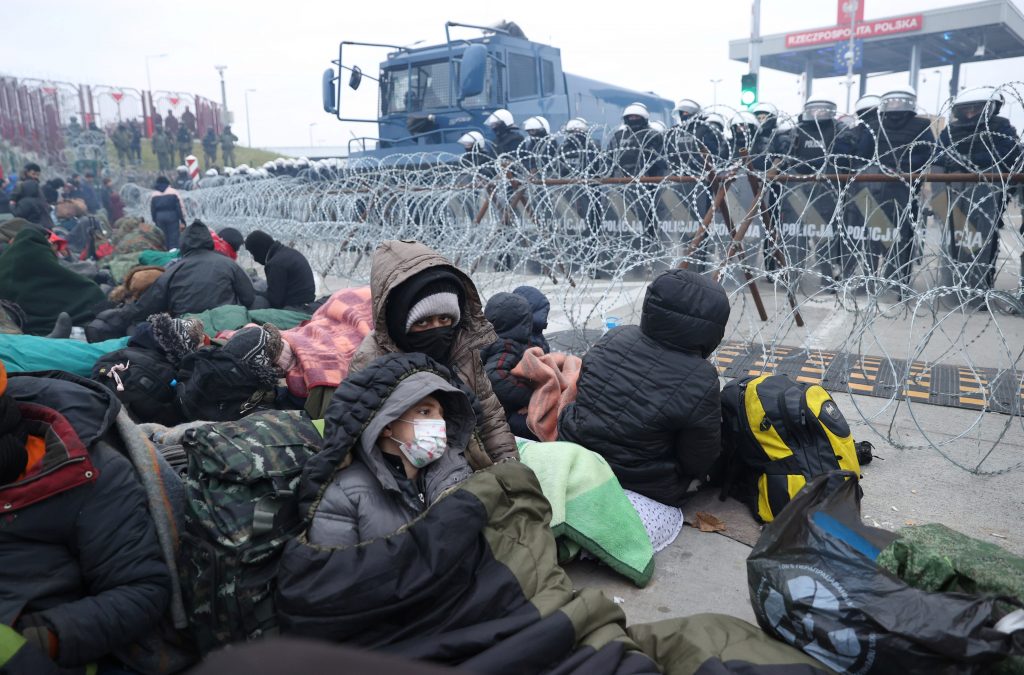 Thousands of migrants from across the Middle East and beyond currently find themselves stranded on the Belarusian-Polish border. They are being cynically used as weapons in Belarus dictator Alyaksandr Lukashenka’s hybrid war against the EU, and their worsening plight represents a potential humanitarian cisis.

In response to the migrant build-up in Belarus, Poland has deployed around 17,000 soldiers to the border zone, where they are facing off against a growing Belarusian military presence. Warsaw has also announced plans to build a border wall and is considering closing the border with Belarus entirely.

Meanwhile, the Iraqi Embassy in Russia has suggested the evacuation of citizens willing to return to Iraq. Belarus’s national carrier Belavia has announced restrictions for residents of Iraq, Syria, and Yemen on flights from Turkey to Minsk. Turkish Airlines has also agreed to stop accepting Middle Eastern citizens on services to the Belarusian capital.

These measures are welcome, but they are insufficient to prevent the possibility of a humanitarian disaster on the Polish border. It is vital that the international community now addresses this escalating confrontation humanely in order to prevent Lukashenka from scoring propaganda points and deprive him of blackmail leverage over the democratic world.

The situation on the Belarusian border has been deteriorating for a number of months as the Lukashenka regime has actively sought to import would-be migrants to Minsk and ferry them to the EU border. At least eight deaths have already been reported on the border due to cold weather conditions along with a lack of food supplies or medical attention.

According to various sources, the Belarusian authorities have established an illicit migration industry charging people fees ranging from USD 4,000 to USD 15,000 for a short-term visa, flight to Minsk, and assistance in reaching the Polish border. The number of flights along key routes from Middle Eastern airports has expanded steadily in recent weeks to meet growing demand.

The role of the Belarusian security forces in this cynical operation has been widely reported. This has included recent video footage that appears to show troops deploying strobe lights while attempting to cut through Polish border barriers.

Lukashenka officially denies orchestrating the border crisis, but he was quite open about his intentions during earlier comments. In May 2021, the Belarus dictator warned that in response to EU sanctions over his crackdown on pro-democracy protests, he intended to end measures preventing migrants from passing through Belarus to the EU. “We used to stop drugs and migrants. Now you will have to catch them for yourselves,” he stated.

At present, there is very little support available for the migrants on the Belarusian-Polish border. When a group of Chechen refugees gathered in Belarusian city Brest in 2017 seeking to travel to Poland, Belarusian human rights organizations provided a range of assistance. However, the majority of Belarusian human rights organizations have since been closed as part of the regime’s crackdown against the country’s pro-democracy uprising.

With Belarusian civil society no longer able to offer assistance, the task has fallen to a handful of international organizations such as the UN’s aid agencies. At the same time, Belarusian and Russian state-controlled media have reported widely on the basic humanitarian support being provided to migrants by the Belarusian authorities.

The crisis is having an impact far from the border zone. Large crowds of mostly Middle Eastern migrants have become part of daily life in Minsk. They congregate in shopping malls and at the airport, in many cases sleeping rough in the city. There is evidence that this is fueling a rising tide of xenophobia and resentment, with many Belarusians expressing their opposition to the influx.

Others appear to see the sudden surge in migrant traffic as an opportunity to earn. Many hotels and restaurants in the Belarusian capital have reported booming business following a Covid-related slump stretching back to mid-2020.

While the crisis on the Belarus-EU border has clearly been manufactured by Lukashenka as part of his geopolitical confrontation with the West, any solution must also involve due care for the many human lives at stake. It is important to note that Lukashenka is enjoying the current hard line response from the Polish side, and will continue to escalate if he feels the crisis is bringing him the propaganda advantages he seeks.

With this in mind, the best approach to countering Lukashenka’s weaponization of migrants may be to disarm this weapon. By accommodating and processing the thousands of migrants currently encamped on the border, Poland could resolve the crisis and deprive Lukashenka of his ability to blackmail the EU.

Any such steps would inevitably risk encouraging similar tactics in the weeks and months ahead, but accepting the migrants and offering humanitarian assistance may be the quickest way to defuse the current crisis until more effective international measures can be introduced to prevent any repeats.

Image: Migrants gather on the Belarusian-Polish border while Polish police stand guard on the Polish side of the border. November 15, 2021. (Oksana Manchuk/BelTA/Handout via REUTERS)