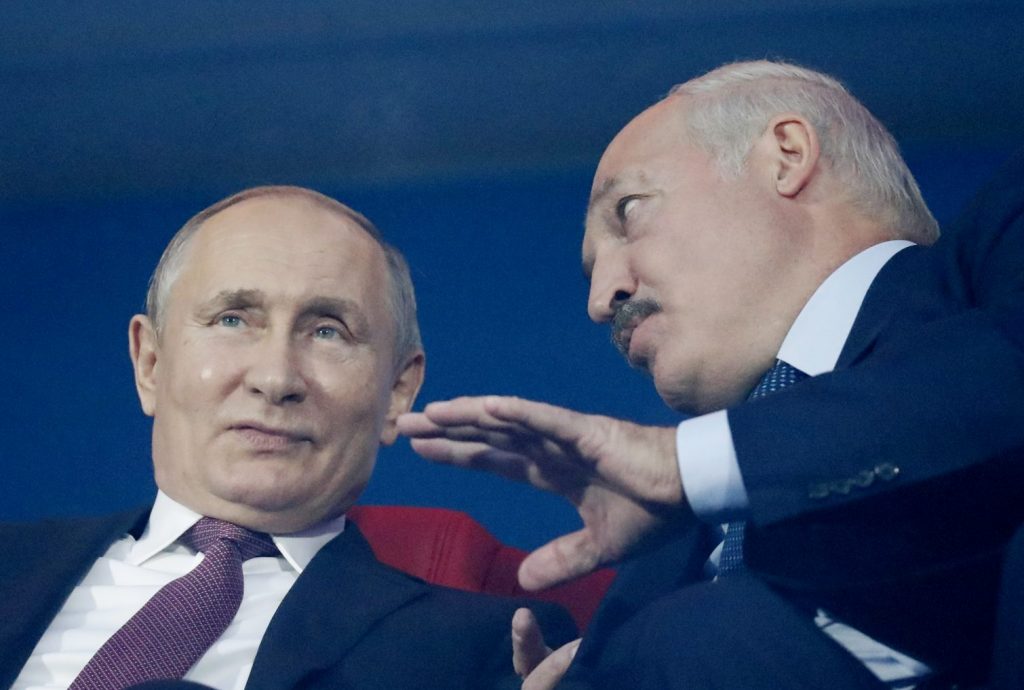 In a ritual that is becoming as frequent as it is increasingly empty, Alyaksandr Lukashenka is heading to Russia yet again to meet with Vladimir Putin.

Citing unidentified officials in Moscow and Minsk, the Russian daily Kommersant reported that preparations are being made for the beleaguered Belarusian strongman and the Kremlin leader to meet at the end of May. It will be their third in-person meeting in just over three months.

But even as the frequency of summits between Putin and Lukashenka increases (they met in Sochi on February 22 and in Moscow on April 22), the actual substance of what they discuss and agree upon has become increasingly obscure.

In their Sochi summit in February, we know that the two leaders went skiing, rode snowmobiles, and lauded their “strategic partnership and alliance.” But after a six-hour meeting and a follow-up phone call the next day, it remained unclear where this relationship between Europe’s last two autocrats actually stood.

The next Putin-Lukashenka meeting on April 22 in Moscow was preceded by theatrics and dramaturgy, leading many observers to expect a consequential event. Just days before the summit, Russia’s Federal Security Service arrested two Belarusians, including one with US citizenship, and accused them of plotting to carry out a coup against Lukashenka during the May 9 Victory Day parade in Minsk.

In the run-up to the meeting, Lukashenka also fueled speculation that some form of deeper integration between Russia and Belarus could be imminent. In an oblique statement posted on the state-run Telegram channel Pul Pervovo, Lukashenka announced that he had made “the most principled decision of my quarter-of-a-century presidency,” adding that “it will be serious” and he would “formalize” the decision soon.

But if anybody was expecting a dramatic meeting in Moscow, they came away disappointed. The summit produced little of substance, at least visibly.

And what about that big decision? Days after returning from Moscow, Lukashenka revealed that he would sign a decree transferring power to Belarus’s Security Council in the event that he is unable to fulfil his duties as president. It is worth noting that Lukashenka’s son Viktor wields considerable power in the 20-member Security Council. The move appeared designed to facilitate a dynastic succession.

One way to look at all this is that amidst the flurry of Putin-Lukashenka summits which appear to decide nothing, the two autocrats are also communicating with each other by sending signals through their actions. This is why we need to view the dramatic and often bizarre events that happen between these summits as components of an ongoing conversation between Putin and Lukashenka.

Arseny Sivitsky, director of the Minsk-based Center for Strategic and Foreign Policy Studies, wrote recently that Putin is seeking to extract the maximum amount of concessions from a weakened and isolated Lukashenka, and is also actively looking beyond his rule.

“Lukashenko periodically flies off to meet Putin but there is never a word about specific agreements,” Sivitsky wrote. “This is because it is obvious that the Kremlin has grown tired of such symbolism and is demanding more serious concessions from Lukashenka, primarily strengthening Russia’s influence on the political process and on national security and foreign policy decisions. The Kremlin is also interested in strengthening its economic influence in Belarus.”

He added: “The main issue is organizing the transfer of power and the coercion of Alyaksandr Lukashenka to hand over power in the interests of the Kremlin. Therefore, the more meetings between Lukashenka and Putin take place, the less details we get about their results.”

Russia has been persistently pressuring Lukashenka to enact constitutional changes that would weaken the presidency and empower the Belarusian parliament. The Kremlin is also actively putting the pieces in place to assure that Moscow would be in a position to control such a newly empowered legislature through pro-Kremlin parties and media.

Thus, when Russia claims to have foiled a coup plot against Belarus and in the process arrests a US citizen, Putin is really sending a message to Lukashenka that his isolation from the West is total, as is his dependence on Moscow.

And when Lukashenka then built on the Russian announcement by claiming, without evidence, that the alleged coup plotters had also aimed to assassinate him and his children, that the plot was approved “by the top political leadership” in the United States, and that he was “grateful to Putin,” the Belarusian strongman appeared to be indicating that he had received Moscow’s message loud and clear.

But when Lukashenka drags his feet on Russian demands for constitutional reform, he is indicating that while he is prepared to be Moscow’s loyal and obedient client, he’s not quite ready to give up power just yet.

And when the Belarusian dictator announces that in the event of his incapacitation, real power will go to the Security Council, where his son wields enormous authority, he appears to be simultaneously stalling for time and floating a trial balloon. Lukashenka may be indicating to Moscow that he is prepared to settle for a dynastic succession.

When Putin and Lukashenka meet again later this month, energy prices, integration, and Belarusian plans to sell bonds in Russia to refinance its debt will all be on the agenda. We probably shouldn’t expect to learn much of substance from that summit. But the real conversation about Lukashenka’s future will continue in words, deeds, and signals.

Belarus ruler Alyaksandr Lukashenka’s recent claim that he was the target of a US-backed coup may be more than just the latest in a series of conspiratorial rants by the increasingly beleaguered dictator.

Image: Meetings between Russian President Vladimir Putin and Belarusian President Alyaksandr Lukashenka have increased in frequency since the outbreak of anti-regime protests in Belarus in August 2020 but details remain vague. (REUTERS/Vasily Fedosenko)