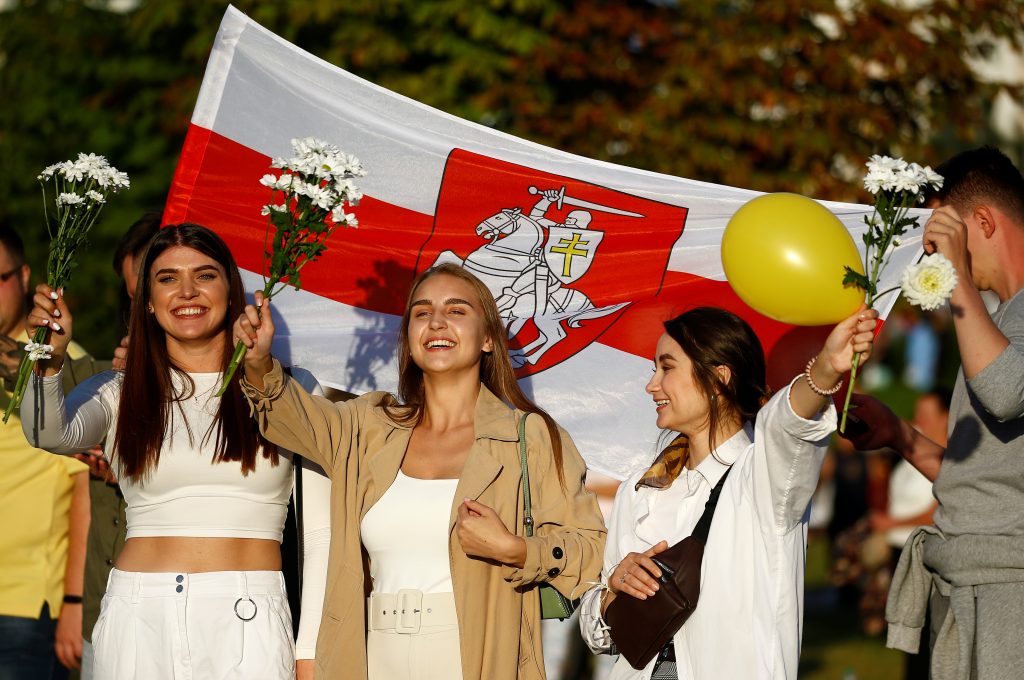 After years in the post-Soviet shadows, Belarus is suddenly the world’s top geopolitical story. Since August 9, dramatic scenes of regime brutality and public defiance have gripped global audiences as Belarusian dictator Alyaksandr Lukashenka struggles to crush an unprecedented wave of nationwide protests over his attempts to claim victory in a deeply flawed presidential election. Lukashenka has ruled Belarus with an iron fist for 26 years, but there is now a real sense of history in the making as the country finds its democratic voice.

This newfound international interest in Belarus has served to expose the lack of constructive foreign policy engagement with what is a strategically important but often overlooked country. Belarus sits on one of Europe’s great fault lines, but since the mid-1990s, its status as a stagnant neo-Soviet dictatorship has served to keep meaningful interaction to a minimum. This needs to change. Policymakers in Europe and the US must rapidly recognize the implications of the historic transformations currently taking place in Belarusian society and adapt their thinking towards the country accordingly.

Continuing the old arm’s length approach is no longer an option. Since the 1990s, Western governments have generally kept their distance from Belarus, with engagement limited to formal diplomatic dialogue and modest economic cooperation along with occasional censures and periodic sanctions. Amid outrage at the heavy-handedness of the crackdown on pro-democracy protesters, the initial talk this week has been of the need for tough new sanctions. However, this alone would only serve to leave an isolated Lukashenka with no option but to surrender Belarusian sovereignty to the Kremlin.

Instead, the international community needs to prioritize support for the remarkable civic movement that has emerged across Belarus over the past few months. This approach can uphold Europe’s democratic principles while defending the continent’s geopolitical interests and preventing Vladimir Putin from exploiting Lukashenka’s weakness in order to advance his own revisionist foreign policy.

Russia looms large over the crisis in Belarus. Ever since Lukashenka first came to power in 1994, he has cultivated close ties with Moscow. For more than two decades, the two countries have been committed to creating a “Union State”. While the specific details of this planned merger have always remained somewhat vague, most observers understand it to mean the gradual loss of Belarusian sovereignty as the country is absorbed into a Soviet-style union dominated by Moscow.

Lukashenka’s ability to remain publicly friendly with Russia while resisting Putin’s appeals for greater integration has earned him a reputation as a crafty politician. However, the relationship has become markedly less cordial in recent years, with the Kremlin withdrawing economic favors and becoming increasingly vocal in its demands. Putin was one of the few world leaders to congratulate Lukashenka this week, but his message read more like a list of demands for deeper cooperation and integration.

If Lukashenka is able to cling onto power but finds himself cut off from the outside world, he will have little choice but to accept Putin’s terms. Moscow’s demands would likely include the establishment of Russian military bases inside Belarus and the sale of the country’s strategic industrial assets to Kremlin-friendly Russian oligarchs. This would transform the geopolitical landscape in Eastern Europe, cutting off the Baltic States and bringing the Russian military to Poland’s eastern border in a far more comprehensive manner than the current limited threat posed by Moscow’s Kaliningrad enclave.

The country most immediately in danger would be Ukraine. If Putin is able to complete the informal occupation of Belarus, he will significantly extend the ongoing Russian encirclement of Ukraine and enable the deployment of Russian troops along the approximately 1000km Ukrainian-Belarusian border. This makes the struggle for democracy in Belarus a national security issue for Ukraine.

One simple step Ukraine and other European countries can take is refusing to recognize the legitimacy of the August 9 presidential election. The “For a Democratic Belarus” cross-party Ukrainian parliamentary group has already issued a statement addressing this. Work is underway to secure wider parliamentary support.

Ukraine can also serve as a possible neutral platform for negotiations between the Belarusian authorities and the opposition. Even if the Lukashenka regime is able to survive, it has already suffered a catastrophic loss of legitimacy that only dialogue can repair. Kyiv might be a suitable place to begin this process.

The wider international community must now initiate a robust discussion on how best to address the historic events taking place in Belarus. In an encouraging step, EU foreign ministers are set to meet on Friday to discuss their options. For Ukraine, this primarily means conducting an active dialogue with regional neighbors such as Poland and Lithuania. The foreign ministers of Ukraine, Poland, and Lithuania recently unveiled the Lublin Triangle as a platform for trilateral engagement. There will rarely be a more appropriate subject for the three countries to discuss.

It is also important to defend Belarus’s democratic aspirations via established international platforms such the Parliamentary Assembly of the Council of Europe (PACE). Due to Lukashenka’s dictatorial rule, today’s Belarus is the only European country not represented at PACE. The Ukrainian delegation can take the lead here and initiate urgent discussion of the human rights violations currently taking place in the country.

Events in Belarus represent a challenge to the entire democratic world. The remarkable courage displayed by the Belarusian protesters in recent days is an inspirational reminder that freedom is not free, but they cannot be expected to succeed without enhanced outside engagement. The struggle for a new Belarus is just beginning. This needs to be reflected in an upgraded international response that matches the scale and significance of the changes taking place in the country.

Comprehensive outside support can play a key role in preventing Lukashenka’s security apparatus from overwhelming this democratic awakening. It can also reduce the chances of Putin launching another expansionist foreign policy adventure in the former Soviet empire.

The outcome of the current protest movement will determine the fate of nearly ten million Belarusians and set the political tone for the wider region. With the global economy facing a major pandemic downturn, now is not the time to allow anti-democratic forces a foothold in the heart of Europe.

Oleksiy Goncharenko is a Ukrainian lawmaker with the European Solidarity party and head of the “For a Democratic Belarus” cross-party parliamentary group.

Image: People gather at a rally in Minsk on August 13, 2020 calling for an end to state violence against protesters. Belarus has been gripped by an unprecedented wave of nationwide protests since the country's fraudulent August 9 presidential election, leading to talk of an historic democratic awakening after 26 years of post-Soviet dictatorship. REUTERS/Vasily Fedosenko