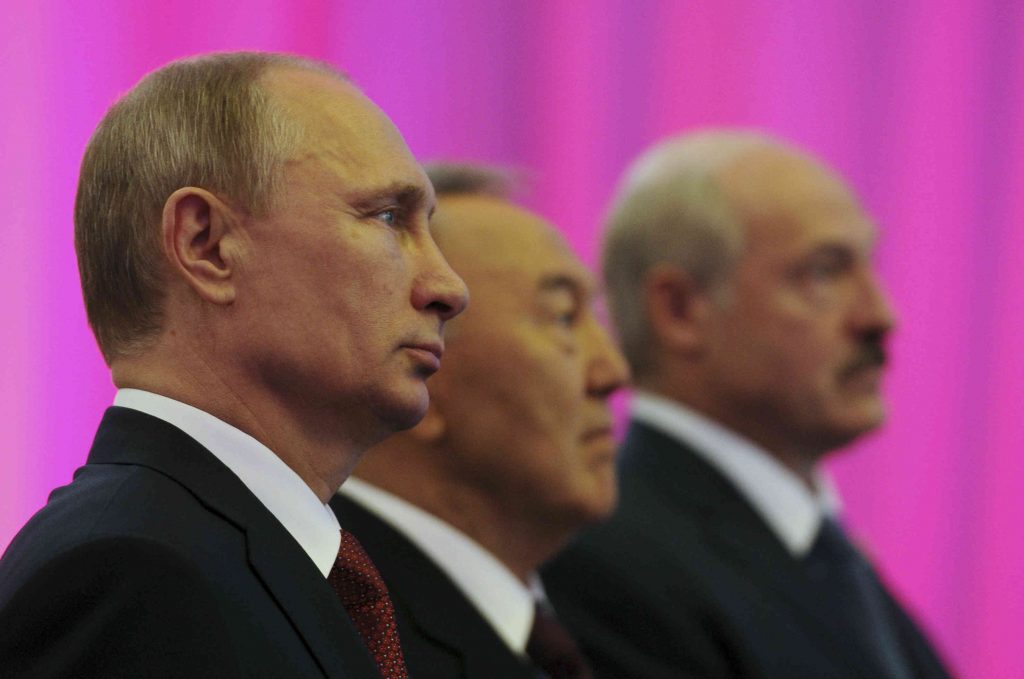 The ongoing pro-democracy uprising in Belarus has placed Moscow in a difficult position. Since protests first erupted in August 2020 over a rigged presidential election, Moscow has found itself in what many observers regard as a no-win situation. By propping up the regime of discredited dictator Alyaksandr Lukashenka, the Kremlin risks provoking the anger of the Belarusian population and forcing a previously friendly neighbor with deep cultural ties to turn decisively away from Russia. However, failure to act in support of Lukashenka means allowing a grassroots democracy movement to succeed on Russia’s doorstep. As well as to set a precedent of allowing democratic activism to force the resignation of a head of state. For a political regime still haunted by the Soviet collapse of 1991, a people-power victory in Belarus that might serve as a symbol to an internal Russian opposition remains unthinkable.

It appears that the Kremlin may be actively working on a third option. In late December 2020, Russian investigative news portal The Insider published a series of leaked documents claiming to outline the Kremlin’s plans for Belarus. The leaked papers, which seem to have been created in September 2020, indicate that Moscow intends to create at least one pro-Russian political party in Belarus. The plan envisages winning future parliamentary elections through a newly created proxy or puppet political party that would be opposed to Lukashenka while favoring continued integration between Belarus and Russia.

The documents were allegedly authored by the Russian President’s Office for inter-regional and Cultural Relations with Foreign Countries. This department is known for implementing Kremlin strategy in Russian-occupied zones such as Abkhazia in Georgia, and is headed by security hardliner General Vladimir Chernov.

The report also details the Kremlin’s intention to shepherd Lukashenka out of power while tinkering with the creation of a new Belarusian constitution. This is a plausible enough approach. While the Kremlin and the Belarusian opposition naturally have very different ideas about what a new constitution would look like, everyone agrees on the need for constitutional changes.

Constitutional reforms would play an important role in the Kremlin’s alleged plans for Belarus. The goal of the changes envisioned by Russia would be to reduce the power of the presidency and to dominate the country via Russia-friendly parties in the Belarusian parliament. Similar tactics have proven at least partially successful at different times in post-Soviet Armenia, Georgia, Ukraine, and Moldova.

If authentic, these leaked documents suggest policymakers in the Kremlin understand perfectly well that backing President Lukashenka is a long-term losing proposition for Moscow. They recognize Belarusian attitudes towards Russia are being poisoned by the Kremlin’s continued support for the deeply unpopular Lukashenka yet have no intention of surrendering their geopolitical dominance over the country.

This would certainly not be Moscow’s first attempt at manufacturing artificial pro-Russian political parties in Belarus. There have been numerous previous efforts to mobilize pro-Russian demographics within Belarusian society into a concrete political movement in support of the Kremlin’s integrationist agenda. Moscow reportedly began work on a new political movement in the weeks following Belarus’s flawed August presidential election, but the initiative enjoyed only limited success.

The difficulties Russia has encountered during previous efforts to establish a Kremlin-controlled political presence in Belarus suggest that Moscow’s current plans may not necessarily bear fruit. Earlier attempts have sought to play on the common Orthodox faith that links most Russians and Belarusians, while also appealing heavily to Czarist and Soviet nostalgia. This fairly backward-looking approach has struggled to resonate with mainstream Belarusian society, where the focus is increasingly on personal liberties and the trappings of a modern European lifestyle. In order to achieve electoral success, any new parties will need to move beyond the increasingly distant shared history connecting the two countries.

Any Kremlin-controlled Belarusian opposition parties will necessarily have to contend with the country’s existing political opposition, much of which is currently in enforced exile outside Belarus. Belarusian opposition leaders are very much aware of Moscow’s interest in subverting the country’s current pro-democracy uprising through proxy parties. However, they are at a distinct disadvantage due to their inability to operate inside Belarus. The genuine Belarus opposition also lacks the deep pockets and technical expertise of their Russian rivals, who can count on virtually limitless resources and years of experience establishing similar political projects both inside Russia itself and throughout the post-Soviet world.

While the Belarusian opposition possesses its own Telegram channels and has proven highly skilled in coordinating efforts via social media, they still lack access to mass media or television stations within the country. Control of mainstream media will be crucial once the inevitable parliamentary elections come.

There is currently no clear timeframe for a potential transition away from the Lukashenka dictatorship. If constitutional changes are indeed implemented, this would pave the way for progress towards an election. However, any vote is unlikely to take place until Russia has managed to establish the credentials of its political projects, which means a parliamentary election is unlikely to be scheduled in the near future, or perhaps even the coming year. At this stage, it is impossible to know whether the recently published plans are genuine or not. The strategies featured in the allegedly leaked documents certainly fit with Moscow’s conduct elsewhere in the former Soviet Empire. They also track with Russian Foreign Minister Sergei Lavrov’s comments during his November visit to Minsk, where he proceeded to press Lukashenka on the issue of constitutional reform. In the immediate aftermath of Lavrov’s visit, Lukashenka himself spoke somewhat cryptically of his plans to step down. However, we will have to wait and see whether the Kremlin is genuinely serious about forcing its awkward ally out of office and orchestrating a Moscow-friendly transition in Minsk.

How secure is Belarus dictator Lukashenka’s throne of bayonets?

Belarus dictator Alyaksandr Lukashenka's political survival depends on the continued loyalty of his extensive security apparatus—but just how secure is this throne of bayonets?