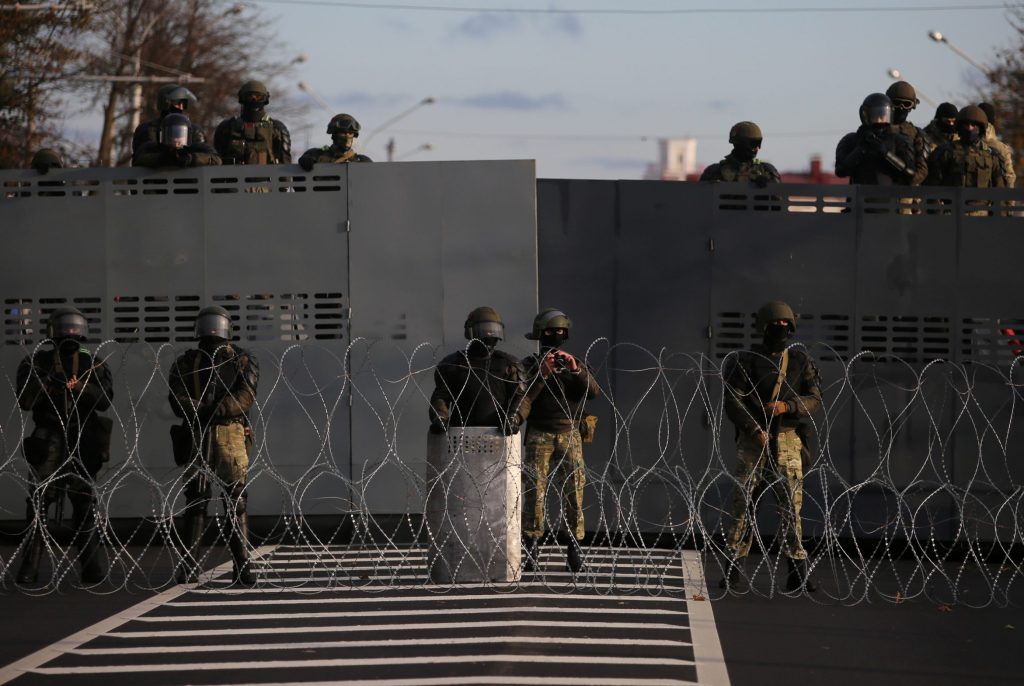 After more than four months of unprecedented nationwide protests, the pro-democracy uprising in Belarus has entered a period of stalemate. Confronted by an increasingly hardline crackdown, Belarusian protesters continue to mobilize and find ever-more inventive ways of demonstrating their opposition to the authorities. Nevertheless, the country’s dictator Alyaksandr Lukashenka remains as defiant as ever.

Despite increasing isolation both at home and on the international stage, Lukashenka still commands the loyalty of the country’s security services. Indeed, the survival of his ossified regime now depends almost entirely on support from the vast apparatus of repression that has been built up during his 26-year reign. As signs begin to emerge of dissent within the ranks of law enforcement, exactly how secure is Lukashenka’s throne of bayonets?

The very first days of the protest movement in early August saw a flurry of eye-catching resignations from the security forces and viral social media videos as individual Belarusians threw away their uniforms in opposition to the heavy-handed crackdown against protesters. However, this initial trickle did not develop into a flood. By all accounts, less than a thousand members of the security apparatus have left the service since August, with the overwhelming majority preferring to tie their fates to that of the regime. The Belarusian Interior Ministry alone has over a hundred thousand employees, which gives an indication of the vast resources still at Lukashenka’s disposal.

The Belarusian Army does not seem particularly eager to take part in breaking up street protests, and appears to have come to an understanding with Lukashenka that they will not be called upon to take part directly in efforts to crush the pro-democracy movement. Yet the security services have proven more than capable since August of maintaining the tempo of repression.

The violence of the crackdown has intensified as the confrontation has evolved, with law enforcement officers demonstrating a willingness to overcome initial cultural taboos regarding the forceful detention of more vulnerable groups such as women and the elderly. A recent weekly pensioner protest in Minsk on December 15 was one such example of this trend, with dozens of seniors rounded up and pointedly held in uncomfortable conditions for a number of hours.

The treatment of ordinary protesters has been significantly worse. Over the past four months, tales of systematic beatings and torture have become routine. A number of deaths have been confirmed, while dozens more remain unaccounted for. Doctors have been so shaken by the injuries they have witnessed that many have joined protest actions. This brutality has also had a radicalizing effect on members of the security services and left the perpetrators of the most heinous crimes with little option but to side with the authorities. They rightly fear lustration and investigation of their actions if Lukashenka loses power.

The regime has been careful to cultivate the continued loyalty of law enforcement. In a recent article, the ever-insightful Mark Galeotti highlighted how Lukashenka is taking steps to safeguard the support of his security apparatus. “OMON are being paid generous overtime and hazard bonuses to try and keep them happy, and officers showing particular zeal are being decorated and promoted, not least as an example to the others of the advantages to be gained from embracing their new role as stormtroopers,” he noted.

These rewards come in parallel with an endless stream of propaganda designed to convince individual officers that they are serving their nation and guarding it against the plots of foreign enemies who are using gullible protesters to destabilize and subjugate Belarus. There have been multiple documented instances of members of the security services demanding to know how much protestors are being paid.

Despite the outward appearance of overwhelming loyalty to Lukashenka, there are growing indications of dissent within the ranks. Over the course of the past four months, opposition groups have reported receiving more and more leaked videos from dissidents among the security services. These videos present evidence of systematic violence against protesters and serious human rights abuses. On a number of occasions, this has included footage that reveals the identities of the perpetrators.

In a leaked video of a different kind, members of the much-feared OMON Interior Ministry units can be heard mocking Lukashenka for appearing in public wearing body armor and brandishing a Kalashnikov. The frequency and nature of these leaks suggests that there are many individuals currently engaged in the crackdown who are deeply uncomfortable with their role and oppose the criminal actions of their colleagues.

It is impossible to know how many members of the security service share these concerns. Nevertheless, many believe that persuading those within the security apparatus to defect may be the key to defeating the Lukashenka dictatorship. Efforts in this direction have become a focus of opposition activity. There have already been attempts to establish funds in order to provide financial support for those who follow their consciences and resign from law enforcement. These efforts have often been paid for by the energized and engaged Belarusian diaspora.

The men in uniform who are responsible for so much violence against peaceful protesters also live in the same communities as their victims. In a bid to name and shame those who are carrying out Lukashenka’s illegal orders, pro-democracy activists have released the identities of thousands of officers involved in the crackdown. For a period, protesters embraced the tactic of removing the balaclavas of security forces engaged in breaking up protest rallies. Tellingly, the regime responded to these unmasking efforts by introducing particularly draconian prison sentences for offenders.

Meanwhile, defectors from Belarusian law enforcement are currently working from exile to chronicle the crimes of the Lukashenka dictatorship and encourage their former colleagues to follow their example. The By_Pol group, which takes its name from an abbreviated form of “Belarusian Police”, features former security service employees and ex-members of the state prosecution service. By_Pol was formed in Warsaw in October and claims to have an extensive network of sympathizers within law enforcement inside Belarus itself. The group says that behind the façade of regime unity, many senior figures within Belarusian law enforcement are inclined to side with the protesters.

The pro-democracy uprising in Belarus already qualifies as an historic event in the country’s post-Soviet nation-building journey. However, in order to achieve its goal of ushering in a new era, the movement must win over the tens of thousands who continue to prop up Lukashenka’s throne of bayonets. Efforts by the country’s opposition forces to encourage defections have so far met with only limited success, but the steady stream of leaked footage and evidence of criminal actions coming from within the security services indicates that the system may be closer to collapse than the authorities would wish us to believe.

If members of law enforcement can be offered sufficient assurances that they will not face criminal prosecution or public disgrace, it may yet prove possible to dismantle the security apparatus that is keeping Lukashenka in place. Once the ranks finally begin to break, the revolutionary denouement could come very quickly indeed.

Image: Belarus dictator Alyaksandr Lukashenka's political survival depends on the continued loyalty of the vast security apparatus that is currently propping up his besieged regime. (REUTERS/Stringer)