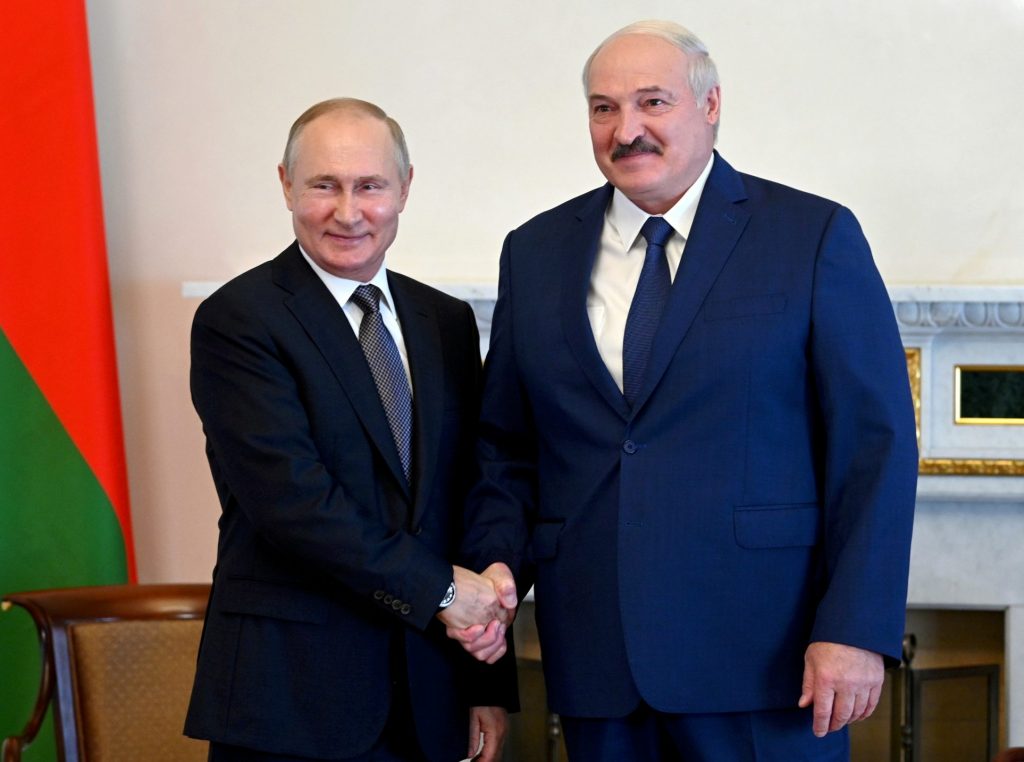 Alyaksandr Lukashenka has decided to make explicit what has long been implicit.

In little-noticed remarks during his rambling eight-hour press conference earlier this month, the Belarusian dictator said a clause in the country’s constitution stipulating that it must strive for neutrality should be removed when the basic law is redrafted.

“What kind of neutrality can we talk about? There are two options here: either we define our state as not neutral in the Constitution, or we do not write anything about it at all,” Lukashenka said, noting that Belarus was a member of the Russian-led Collective Security Treaty Organization (CSTO) and Eurasian Economic Union (EEU).

Belarus’s constitutionally mandated neutrality has long been something of a chimera. In addition to being a member of the CSTO and EEU, Belarus is also part of a broad but ill-defined “union state” with Russia which, among other things, includes an integrated air defense system.

Although Belarus has long been a de facto Russian client state whose economy survived on subsidies from Moscow, the facade of neutrality previously gave Lukashenka a degree of flexibility in his relations with the Kremlin. It enabled him to make periodic overtures to the West in order to extort more largesse from Russia. It also provided a safety valve when Lukashenka feared Belarusian sovereignty was in danger, as was the case with his opening to the West following Russia’s armed intervention in Ukraine in 2014.

The rigged Belarusian presidential election in August 2020, the massive protests that followed it, and Lukashenka’s ensuing brutal crackdown on dissent have changed this game entirely. Lukashenka is now persona non grata in the West and has no choice but to go all in with Russia.

Lukashenka’s recent comments about removing the neutrality clause in the Belarusian Constitution appear to have had an audience of one: Vladimir Putin. “Lukashenka wants to emphasize, within the framework of political bargaining with Russia, that Belarus is relinquishing any obligations to the West and demonstrating full involvement in Moscow’s strategic priorities. This is a step toward paying the debt for Russia’s support of the Lukashenka regime at a critical moment in August 2020,” Belarusian political analyst Pavel Usov told Deutsche Welle.

At times, Lukashenka’s efforts to demonstrate that he shares Moscow’s strategic priorities manifest themselves in abjectly silly ways, such as the opening of criminal cases against European citizens for disrespecting the Belarusian flag.

But in some cases, Lukashenka’s anti-Western moves are more sinister and damaging. This is the case with his manufactured migrant crisis, which is creating chaos on the Belarusian borders with Lithuania, Latvia, and Poland. The Belarusian dictator has also threatened to disrupt international supply chains between Europe and Asia. In July, Lukashenka ordered his government to take steps to block the transit of goods from the European Union to Russia and China in retaliation for EU sanctions.

Lukashenka’s war with Europe is also performative. Over the past year, Russia has been pressing the Belarusian dictator to enact constitutional changes reducing the authority of the presidency and strengthening the country’s parliament. The Kremlin is meanwhile putting the pieces in place to make sure Moscow would be in a position to control such a newly empowered Belarusian legislature through pro-Kremlin parties and media.

The method to Lukashenka’s madness is that it is designed to convince the Kremlin he will be a loyal and pliant client amid speculation that Moscow is trying to ease him out. This approach may be working. In an interview with Belorusskiy Partizan, political analyst Pavel Usov said Putin appears to be concluding that the prospect of easing Lukashenka out of power is too risky.

“I think that today Putin is unlikely to consider the option of Lukashenka’s departure,” Usov said. “It is necessary to understand what the consequences of Lukashenka’s departure from power are for the system. A personalist regime operates in Belarus, and as soon as the dictator leaves, unpredictable processes of disintegration of the system will begin, which will be extremely difficult to control. Even a conditional transition of power from a dictatorship to a new dictatorship under external control is risky. Especially in a deep political crisis. I think the Kremlin is aware of these risks.”

From Putin’s perspective, it may be a case of better the devil you know, especially if he happens to be weak, isolated, and desperate. “I think Putin today is rubbing his hands, watching Lukashenka quarreling with the West all the time, because this increases Belarus’s dependence on Moscow,” Belarusian political analyst Alyaksandr Klaskouski said in an interview with Euroradio.

Lukashenka’s call to remove the neutrality clause from the Belarusian Constitution comes just weeks before Russian-Belarusian Zapad-2021 military exercises, which will see 12,800 troops, including 2,500 from Russia, training in Belarus from September 10-16. This week, a Russian Defense Ministry delegation led by General Yunus-bek Yevkurov, the deputy minister, visited Belarus as part of preparations for the exercises.

Ahead of Zapad-2021, the two countries have already conducted a record number of joint military exercises this year. This almost constant rotation of Russian forces in Belarus means there is now a de facto permanent Russian troop presence in Belarus.

In one sense, the removal of the neutrality clause in the Belarusian Constitution simply formalizes something that has long been understood. But it is consequential nonetheless because if further solidifies the Putin-Lukashenka axis of autocrats.