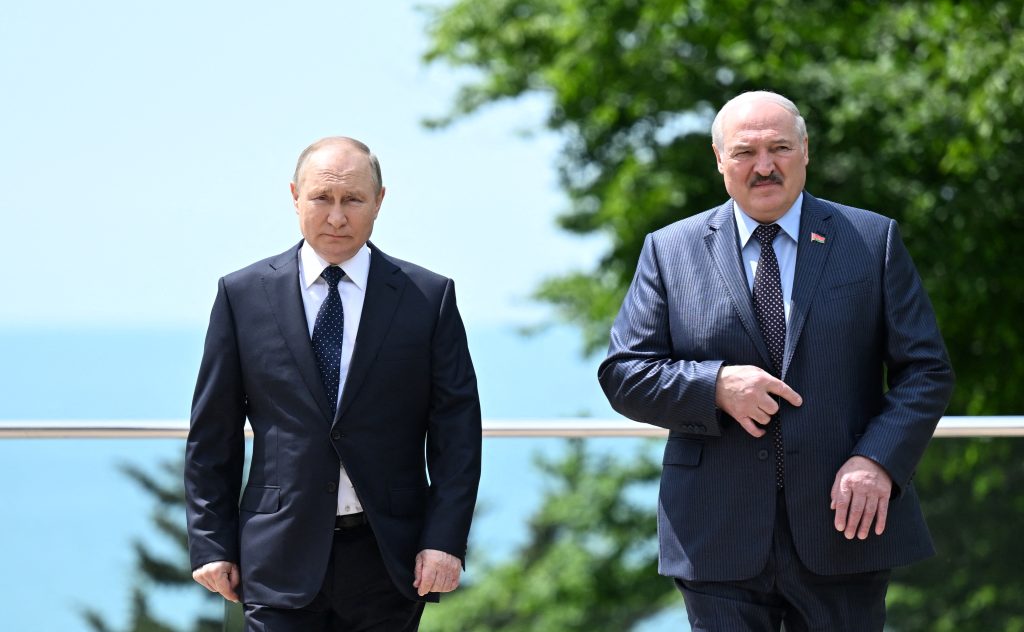 Belarus is becoming the lynchpin of Russian President Vladimir Putin’s threats to expand the war in Ukraine.

Putin said in an interview with Rossiya-1 state television on June 5 that Moscow would “strike at those targets that we have not yet been hitting” in Ukraine if the West follows through on its pledge to provide Kyiv with long-range weapons. As the autocrat in the Kremlin was delivering that menacing message, Belarus dictator Alyaksandr Lukashenka was busy playing his tried-and-true role as Putin’s little helper and chief enabler.

Less than two weeks before Putin’s threat, on May 24, the Ukrainian General Staff announced that Russia had deployed a division of nuclear-capable Iskander-M missiles in the Brest region of Belarus near the Ukrainian border. The missiles have a range of 400-500 kilometers, which puts large parts of central and western Ukraine within striking distance. And the day after Putin’s remarks, on June 6, Ukraine’s General Staff announced that in addition to the Iskanders, Russia had also deployed Pantsir-S1 anti-aircraft gun systems and S-400 anti-aircraft missile systems.

Putin’s threat, coupled with the recent deployments of military hardware to the Belarusian-Ukrainian border and the first airstrikes in weeks against Kyiv, have raised alarms that Russia may be about to renew its assault on the Ukrainian capital and revive its earlier more expansive war ambitions. These steps have also starkly illustrated the absurdity of Lukashenka’s frequent protestations that he is not a co-aggressor in Russia’s war against Ukraine.

As the Minsk-based political analyst Artyom Shraibman wrote recently, “on every possible occasion, Lukashenka reiterates that he has always been against the war and wants it to end as soon as possible.” Yet at the same time, “Russian troops, jets and missile systems have not been fully withdrawn from Belarus.”

Not only have they not been withdrawn, they are being augmented.

It is also worth noting that as Putin was threatening to expand the war in Ukraine and deploying nuclear-capable missiles and anti-aircraft systems to Belarus to make good on that threat, he was also seeking to leverage the escalating grain crisis he created by blockading Ukraine’s Black Sea ports in order to get Belarus relief from Western sanctions.

In remarks to Russian media on June 3, Putin said “the easiest and cheapest way” to export Ukrainian grain to the world is through Belarus. “From Belarus it can go directly into the ports of the Baltic states, to the Baltic Sea, and anywhere else in the world,” Putin noted. “But in order for this to happen, the sanctions against Belarus must be lifted. It’s not our call, but that’s how President Lukashenka would put it.”

This could easily be dismissed as trolling. But it also illustrates the degree to which Lukashenka’s Belarus has effectively become an appendage of Putin’s Russia.

Lukashenka’s fate is now inexorably tied to Putin’s and to the outcome of his war against Ukraine. This is something the Belarusian opposition is very aware of as it plots its course in the event of a Russian defeat. If the war leaves Putin diminished, it will also leave Lukashenka vulnerable.

“If the Putin regime is somehow weakened to the point where it cannot subsidize its remaining allies and project military power in its immediate neighborhood, Belarus may well repeat the process seen in the region in the late 1980s,” Shraibman wrote. “Just as Central European communist regimes fell apart when the Soviet Union showed itself unable to prop them up, Belarus will be forced to reform and Westernize if Putin’s Russia becomes weak enough. Provided, of course, that Minsk has managed to keep its statehood intact up until that moment arrives.”

Which means that if Ukraine can defeat Russia and preserve its sovereignty and independence, this may also have the added benefit of sparking political change in Belarus as well. All the more reason for the West to stay the course in supporting Ukraine with all the weapons, training, intelligence sharing, and diplomatic assistance that it needs, Putin’s threats and Lukashenka’s enabling notwithstanding. This is not the time to worry about humiliating Putin or to press Ukraine into making concessions.

Putin began this year, the centenary of the founding of the Soviet Union, with dreams of restoring the old empire through a soft annexation of Belarus and the military subjugation of Ukraine. He may yet succeed. But with the year almost half over, it is not outside the realm of possibility that he could wind up with neither.