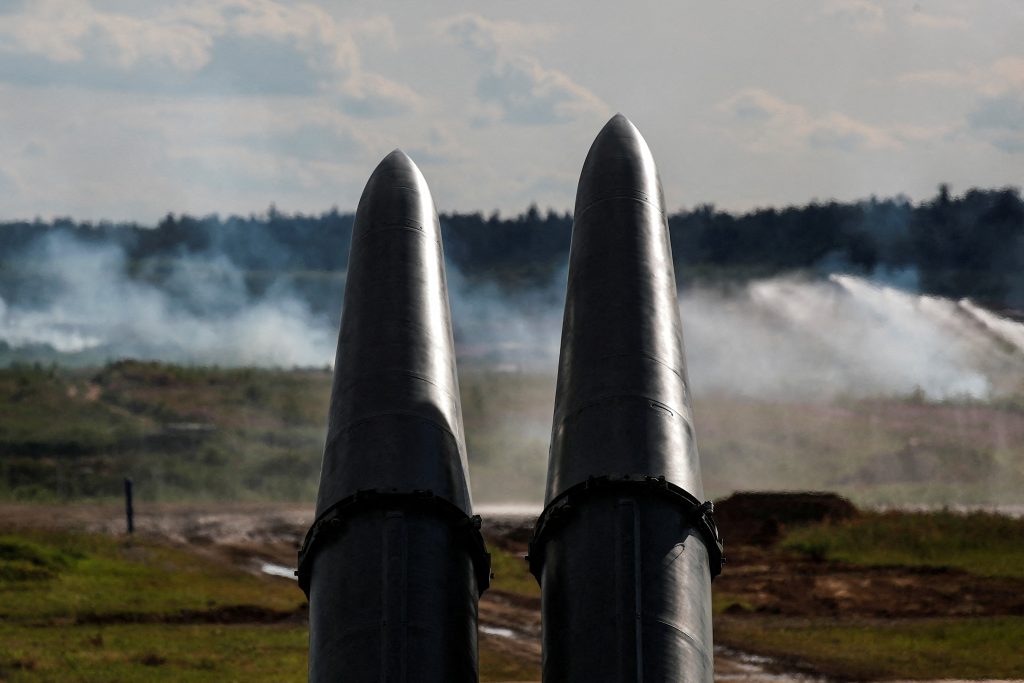 In a rambling letter to United Nations Secretary General António Guterres on May 23, the Belarusian autocrat wrote that the West’s “disrespect for” what he called Russia’s “legitimate interests” led to the current East-West tension and “provoked a heated conflict on the territory of Ukraine.” Lukashenka also called on the West to “refrain from the supply of weapons” to Ukraine in order to “prevent a regional conflict in Europe from escalating into a full-scale world war.”

In the letter, which was delivered as Lukashenka was meeting Putin in Sochi, he also decried the fact that much of the world views him as a co-aggressor in the war. “We are not aggressors, as some states try to present us. Belarus has never been the initiator of any wars or conflicts,” he wrote.

The Belarus dictator’s protestations have repeatedly proven to be hollow given that Lukashenka has allowed Russia to use Belarusian territory as a platform to attack Ukraine, and this time was no exception. With Lukashenka, it is always best to watch what he does rather than listening to what he says. Shortly after warning the West about escalation and protesting that he was not a co-aggressor, Lukashenka proceeded to act like an aggressor and help Putin escalate the war in Ukraine.

One day after Lukashenka’s letter, on May 24, the Ukrainian General Staff announced that Russia had deployed a division of nuclear-capable Iskander-M missiles in the Brest region of Belarus near to the Ukrainian border. “There is a growing threat of missile and air strikes on our country from the territory of the Republic of Belarus. The aggressor has deployed a battery of Iskander-M mobile short-range ballistic missile systems in the Brest region, approximately 50 kilometers away from the Ukrainian state border,” the Ukrainian General Staff wrote in a post on Facebook.

The missiles have a range of 400-500 kilometers, which puts large swaths of central and western Ukraine within striking distance. Lukashenka also announced the previous week that Belarus had purchased Iskanders and S-400 anti-aircraft missiles from Russia.

The missile deployments and sales came as Belarus conducted military exercises near the Ukrainian border and Kyiv warned about increased troop levels and military activity. In a situation report on May 23, the Ukrainian General Staff warned that “the armed forces of the Republic of Belarus are intensifying reconnaissance and additional units are being deployed in the border areas of the Homel region.”

The Russian missile deployments to Belarus and the uptick in Belarusian military activity suggests that while the fighting in Ukraine may currently be concentrated in the east of the country, Moscow still intends to pressure Ukraine from the north.

The military build-up on the Belarusian-Ukrainian border has been mirrored by similar activity along Ukraine’s nearby northern frontier with Russia. Seven weeks after Russia withdrew from the Chernihiv and Sumy regions in northern Ukraine, Ukrainian officials have recently noted an uptick in cross-border rocket and artillery fire and an increased Russian troop presence. “In any case, we are preparing for a possible reinvasion,” Oleksandr Vadovsky, deputy commander of Chernihiv’s border guards, told The Washington Post.

The Russian deployment of Iskander missiles to Belarus also starkly illustrates that despite his claims to the contrary and his half-hearted attempts to distance himself from the conflict, Lukashenka remains Putin’s chief enabler in the war against Ukraine and is very much a co-aggressor.

He allowed the Kremlin autocrat to use his country’s territory to stage an illegal invasion of a sovereign and democratic country. Lukashenka let Belarus become a platform for Russia to bomb Ukrainian cities and villages. He is directly responsible for the deaths of thousands of innocent Ukrainian civilians. And now he is allowing Putin to deploy nuclear-capable Iskander missiles near Ukraine’s border.

The blood of any Ukrainians who may be killed by those missiles will also be on Lukashenka’s hands and he should be held accountable for it.