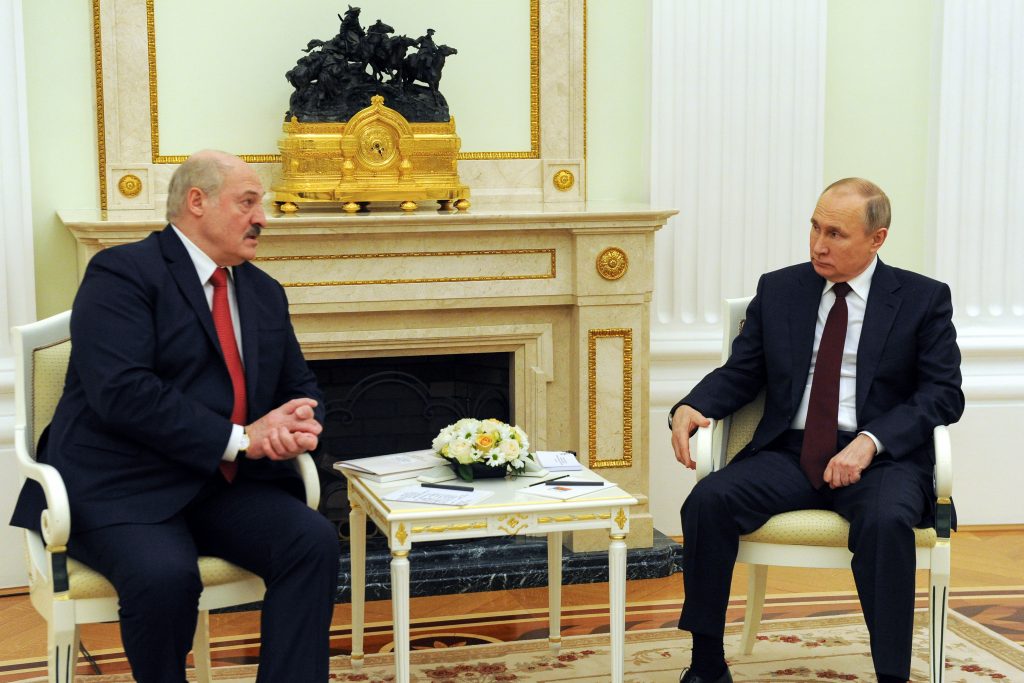 On the eve of his trip to Moscow for talks with Vladimir Putin last week, the Belarusian strongman released an oblique statement on the state-run Telegram channel Pul Pervovo announcing that he had made “the most principled decision of my quarter-of-a-century presidency.” Lukashenka added that the decision “will be serious” and he would “formalize” it soon.

Those remarks naturally led to speculation that some form of deeper integration between Russia and Belarus could be imminent and may even be announced during Lukashenka’s April 22 visit to the Russian capital.

That, of course, did not happen. Days after returning from his Moscow trip, Lukashenka finally revealed his big decision in remarks to reporters during a visit to areas affected by the 1986 Chornobyl disaster.

“Tell me, if there is no president tomorrow, would you guarantee everything is going to be fine? No,” he said. “I will sign a decree about how the power in Belarus will be set up. If the president is shot, the next day the Security Council will be empowered.”

According to these changes, which will be formalized in a presidential decree, in the event of Lukashenka’s death or incapacitation, Belarusian Prime Minister Roman Golovchenko would still formally become acting president as stipulated by the country’s existing constitution. However, his role would be largely ceremonial. Real power would be vested in the 20-member Security Council, which would make decisions by secret majority vote. This would effectively turn the post-Lukashenka Security Council into the functional equivalent of the Soviet-era Politburo.

Lukashenka’s announcement came amid a dizzying cascade of events as the political crisis following Belarus’s disputed August 2020 presidential election lurches towards its tenth month. The United States has imposed a new round of sanctions against Belarus. Russia, which has long sought to turn its smaller and strategically vital Western neighbor into a more pliant client state, has been leveraging Lukashenka’s vulnerability and isolation to expand its economic, political, and military footprint.

The announcement also came a week after authorities in Moscow and Minsk said they had foiled a US-backed plot to overthrow the Belarusian government and assassinate Lukashenka, arresting the alleged plotters including Yuras Zyankovich, a Belarusian-born US citizen. The Russian and Belarusian authorities have provided scant evidence to support their explosive allegations, which have been strongly denied by Washington.

The motivations and agendas at play behind Lukashenka’s move are still opaque at this early stage and are difficult to discern. It remains unclear whether the decision was cleared with the Kremlin and forms part of an unfolding plan to facilitate a future post-Lukashenka transition acceptable to Moscow. Conversely, it may be an effort by the embattled Belarusian dictator to protect himself from Russian encroachment.

Russia has been persistently pressuring Lukashenka for a number of months to enact constitutional changes that would weaken the presidency and effectively turn Belarus into a parliamentary republic. The Kremlin is also actively putting the pieces in place to assure that Moscow would be in a position to control such a newly empowered post-Lukashenka Belarusian legislature through pro-Kremlin parties and media.

By empowering the Security Council in the event of his demise, Lukashenka appears to be seeking to hinder, if not foreclose on, that possibility. According to Belarusian political analyst Artyom Shraibman of the Moscow Carnegie Center, Lukashenka appears to be creating a “junta mechanism” to transfer power to his son Viktor, who wields enormous influence on the Security Council. “The decree is only a preparatory stage for a new configuration of the regime,” he wrote.

The narrative that Lukashenka is seeking to cement a dynastic succession to his son has gained currency in the international media. But according to an unpublished confidential report by the Minsk-based Center for Strategic and Foreign Policy Studies, which is known for having excellent sources in Minsk and Moscow, the move actually “reflects a strategic impasse in both foreign and domestic politics” and could also become a mechanism to facilitate a Russian takeover of Belarus.

According to the report, due to the current volatile political situation in Belarus, including the lack of consensus among the elite about how to move forward, Lukashenka’s attempt to empower the Security Council will lack any real legitimacy. This opens the door for “an external power to intervene and become the source of additional legitimacy. And the only power capable of doing that is the Russian Federation.”

The report adds, ominously, that “the purpose of the decree is quite clear: to rule out the possibility of power vacuum and to limit the unilateral powers” of any acting president in the event of Lukashenka’s downfall. “However, the risks associated with the decision…are enormous.”

Lukashenka is either launching a desperate power play to secure a dynastic succession, inadvertently laying the groundwork for Russian intervention, or seeking to negotiate the terms of his exit with the Kremlin. Whichever is the case, Russia’s strategic objective of making Belarus a pliant client remains unchanged.