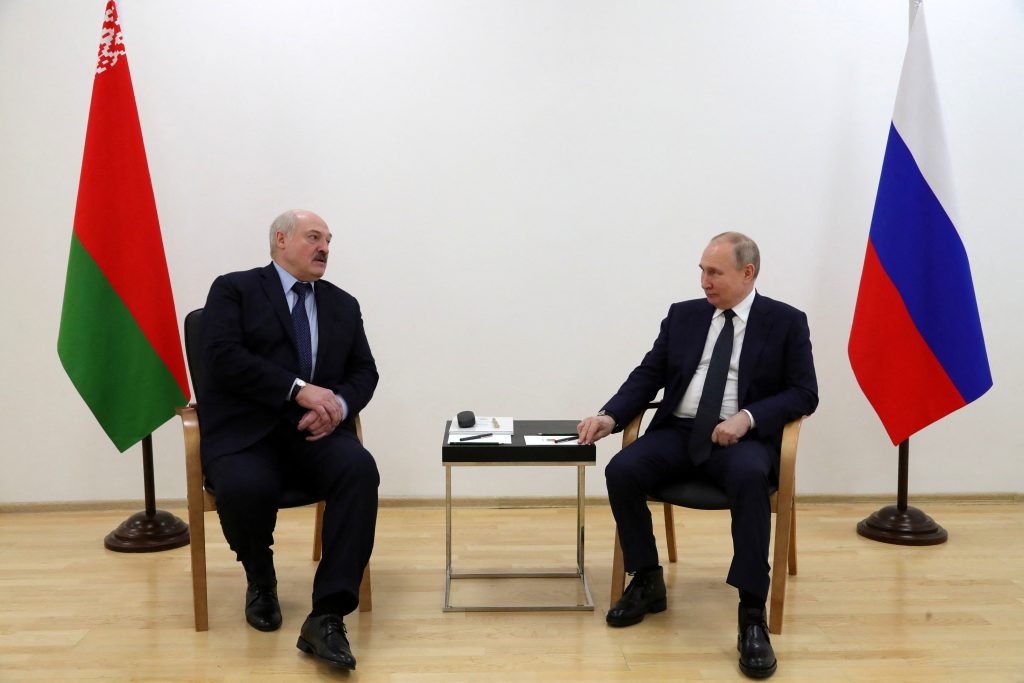 When Vladimir Putin and Alyaksandr Lukashenka met at a space launch facility in the Russian Far East on April 12, the carefully choreographed press conference was full of the predictable agitprop, lies, and disinformation.

The Belarusian dictator claimed that the atrocities committed by Russian forces in the Kyiv suburb of Bucha were actually faked as part of “a psychological operation staged by Englishmen.” For his part, the Kremlin autocrat declared that the Russian war against Ukraine was proceeding as planned and insisted Moscow’s “goals are absolutely clear and noble.”

But the gaslighting and falsehoods masked an important truth about why Putin and Lukashenka were meeting now. As Russia shifts its tactics, abandoning for the time being its efforts to take Kyiv in favor of an assault on eastern and southern Ukraine, Belarus’s role in the war is also undergoing a transformation.

In the run-up to the meeting, Lukashenka, who has allowed Russia to use Belarusian territory as a staging ground for its assault on Ukraine, complained bitterly about being labeled “an accomplice of the aggressor.” He also repeatedly demanded that Belarus be a party to any talks to resolve the war. Meanwhile, Belarus recently published a list of unfriendly countries that pointedly did not include Ukraine.

The Kremlin is also playing along with these apparent attempts to reframe the Belarusian role in the war. In recent days, Russian Foreign Minister Sergei Lavrov suggested, apparently with a straight face, that Belarus should be one of the “neutral” countries that could provide security guarantees to Ukraine in the event that Kyiv declares its neutrality.

According to an unpublished confidential report by the Minsk-based Center for Strategic and Foreign Policy Studies, Lukashenka has recently been promoting a change in the Belarusian position toward the war. Belarus will remain Russia’s ally and will not criticize the war, but Lukashenka does not want to be viewed as a co-aggressor in the conflict. Toward this end, Belarus will intensify diplomatic efforts to end the war and will insist on participating in any peace negotiations.

In other words, after assisting and enabling an arsonist, Lukashenka now apparently wants to pretend he is a firefighter.

Lukashenka’s efforts to shift perceptions of Belarus’s involvement in the war are being largely driven by domestic politics. According to a recent poll by Chatham House, just three percent of Belarusians support the idea of Belarus participating in Russia’s war against Ukraine. At the same time, 67 percent oppose Russia shelling Ukrainian cities from Belarusian territory and 52 percent oppose allowing Moscow to use Belarusian territory as a staging ground for the war.

Moreover, Belarusian railway workers have engaged in a campaign of sabotage to prevent Russian troops and military hardware from reaching Ukraine via Belarus. The Cyber Partisans hacking group has also launched attacks to disrupt the Belarusian railways. And hundreds of Belarusian citizens have joined volunteer battalions to fight on the Ukrainian side of the conflict.

For its part, Russia appears to find this Belarusian attempt to reorient its role in the war somewhat useful, at least for the moment.

According to the Center for Strategic and Foreign Policy Studies report, “the Kremlin hopes to use the position of Belarus in the negotiation process and include the country among the guarantors of Ukraine’s security for its own interests. This is simply to prolong the negotiations because Moscow wants to approach the final phase of talks in a strong position, meaning after military victories.”

Lukashenka may be dreaming about reviving the role he played following Russia’s 2014 annexation of Crimea and armed intervention in the Donbas. At the time, he was able to position himself as an honest broker and host of the Minsk peace talks. But that horse has clearly left the barn.

Lukashenka’s status in 2014 was bolstered by his refusal to recognize the annexation of Crimea, his ridiculing of Putin’s notion of a “Russian world,” and his pledge not to allow Belarusian territory to be used to attack Ukraine. In recent months, however, he has gone all in with Russia’s imperial designs. This makes any attempt to backtrack virtually impossible.

Moreover, Putin is clearly prepared to exploit Lukashenka’s posing and posturing as a peacemaker for his own cynical purposes.

This is Lukashenka’s war too. Ukrainian cities have been shelled from Belarus. Russian troops invaded Ukraine from Belarus and are now regrouping and resupplying in Belarus. Despite his protestations, Lukashenka has turned his country into a belligerent. You can’t become a firefighter after being an arsonist’s apprentice.