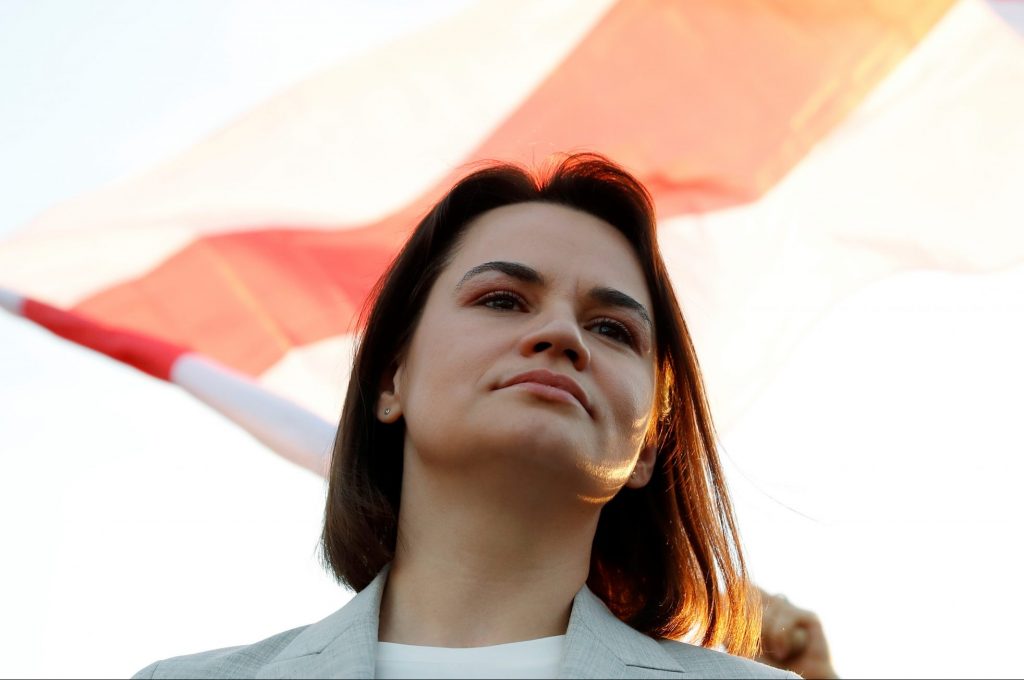 Twelve months since Belarusians first shocked the world with an unprecedented wave of protests against dictator Alyaksandr Lukashenka, the biggest political crisis to rock the East European nation since the collapse of the USSR is still far from resolved.

In late summer 2020, I spent three weeks in Minsk reporting on the popular movement that sprang up in the wake of Belarus’s deeply flawed August 9 presidential election. Lukashenka almost certainly lost the vote to challenger Sviatlana Tsikhanouskaya but declared himself the winner by a landslide margin, sparking nationwide demonstrations calling for change. It was a heady moment full of optimism, energy, courage, and remarkable levels of civility.

Even amid the heightened emotions and sense of history that characterized those early weeks of protest, it was soon obvious that the Belarusian revolution was destined to be an overwhelmingly peaceful and courtly affair, at least on the part of the protesters.

In an August 22, 2020, column entitled, “The Belarus revolution may be too velvet to succeed,” I posed the question of whether this approach would prove effective against the ruthless police state apparatus assembled by Lukashenka. “The protesters are generally very sweet, polite, and peaceful. Many are young, middle class Belarusians who work in the country’s booming IT industry and come to rallies dressed in form-fitting hipster ensembles,” I reported from Minsk. “Unlike events in Kyiv in 2013-14, there is no militant edge to the demonstrations. Indeed, this revolution is so velvet that at times it feels positively sleepy.”

One year on, those observations remain pertinent. The peaceful protest movement has long since been forced off the streets and its leaders have been exiled abroad, while Belarusian society has been subjected to a brutal crackdown on a scale unprecedented in modern European history. Nevertheless, opposition to Lukashenka continues, and the Belarus dictator is widely seen both at home and abroad as illegitimate.

The ability of Belarus’s opposition forces to keep the protest movement alive for an entire year is a remarkable achievement in itself. Most revolutions either succeed or are snuffed out within a period of around three months. That has not proven the case in the struggle for a democratic Belarus.

The country’s pro-democracy movement has refused to succumb to the terror tactics of the regime, which have seen tens of thousands detained and hundreds of political prisoners sentenced to extended prison terms amid widespread reports of torture and other human rights abuses. The public have fought back with ever more inventive demonstrations of opposition including flash mob protests and impromptu patriotic singalongs. In an atmosphere of mounting repression, even wearing red socks has become an act of rebellion.

With the hard line response of the security forces making protest actions inside Belarus physically risky, the focus has shifted online and to the activities of exiled Belarusian opposition groups. From her base in Lithuania, opposition leader Sviatlana Tsikhanouskaya has toured Western capitals, recently meeting with US President Joe Biden and UK Prime Minister Boris Johnson as part of her tireless campaign to keep Belarus high on the international agenda.

Exiled former security service officials have sought to chronicle the human rights abuses of the regime and encourage defections among their ex-colleagues. Meanwhile, a major recent data hack by a group calling itself Belarusian Cyberpartisans has exposed a tremendous amount of information about the Lukashenka regime and the activities of the security services.

These efforts have not succeeded in forcing Lukashenka from power, but they have helped to maintain pressure on the regime and prevented the momentum of the protest movement from ebbing away entirely. Over the course of the past year, such grassroots activities have also created the bedrock of a future civil society that bodes well for the country’s long-term development.

Some observers have identified the Belarusian opposition’s commitment to nonviolent protest as a fatal flaw, but critics must consider the likely alternative. While peaceful resistance is very much in line with the Belarusian national character, it is also a pragmatic choice that recognizes the high probability of Russian President Vladimir Putin sending troops across the border if necessary. Indeed, during the early days of the protest movement in August 2020, Putin openly declared his readiness to deploy Russian security forces if the situation were to get “out of control.”

Since August 2020, Russia has found itself increasingly drawn into the crisis in neighboring Belarus. The Kremlin is intrinsically opposed to Lukashenka’s removal via popular uprising, fearing that a victory for grassroots democracy in Belarus could inspire similar demands within Russia itself. Likewise, Moscow seeks to avoid a repeat of the Ukrainian scenario and is committed to preventing the emergence of a new and democratic Belarus that may turn away from Russia and seek closer ties with the Western world.

At the same time, Lukashenka has little personal support in the Kremlin, where he is widely viewed as an erratic, expensive, and embarrassing annoyance. Many in Putin’s inner circle would be happy to see Lukashenka leave the scene, as long as a suitably Russia-friendly transition could be engineered.

Belarus opposition leaders appear convinced that further progress hinges on their ability to decouple Lukashenka from his uneasy relationship with his Russian sponsors. This can be seen in their considerable reluctance to burn bridges with Moscow or publicly criticize the Kremlin for its role in propping up Lukashenka.

Instead, they pin their hopes on Russia eventually turning away from the inconvenient Lukashenka and accepting the inevitability of change. Moscow’s vocal push for changes to the Belarusian Constitution is an indication that Russia may accept a power transition in Minsk. Progress towards a new constitution will be a good indicator of the Kremlin’s further intentions.

While Moscow intervened decisively last summer to prevent the imminent collapse of the Lukashenka regime, the democratic world has adopted a more cautious approach to the crisis. The US, Canada, and the EU have recently strengthened sanctions measures against Belarus, but even these enhanced measures are widely seen as insufficient to force a change of behavior from either Lukashenka or the Kremlin. This limited Western response has helped strengthen perceptions that the outcome of the crisis will ultimately be determined by the people of Belarus and by Russia’s actions.

So far, the Kremlin has encountered no real costs for its intervention and has been able to exploit Lukashenka’s weakened position in order to significantly strengthen its position in Belarus. Unless the West revises its sanctions strategy to specially target the Lukashenka regime’s Russian enablers, there is little reason to expect any dramatic changes in Kremlin policy.

For the Belarusian opposition, there are no obvious alternatives to the velvet strategy adopted last year. With Russia poised to use force in the event of a deteriorating security situation, and with popular support inside Belarus hinging on nonviolent tactics, there is unlikely to be any deviation from the commitment to peaceful protest that has defined the movement since August 2020.

Instead, domestic audiences will have to continue seeking new and inventive ways of voicing their dissent, while exiled opposition figures and diaspora activists will work to maintain international interest. Key objectives at the international level will be an increase in sanctions pressure and further material support for civil society.

As the political crisis enters its second year, the drama of August 2020 seems a long time ago. Lukashenka is still very much on power, and his opponents have been dealt a series of powerful blows. However, the Belarus dictator has been unable to crush the country’s pro-democracy movement and is now more internationally isolated than at any time in his 27-year reign.

The Belarusian opposition has demonstrated remarkable discipline over the past year, along with a determination to outlast the country’s discredited dictator. They have succeeded in laying the civil society foundations for a new Belarus, but have yet to begin the actual construction process. Activists continue to insist that a political cascade may take place at any moment, and predict that the subsequent demise of the regime could be rapid. This optimistic outlook is not unreasonable, as the system does appear brittle.

Looking ahead, it would be foolish to write off Lukashenka entirely and equally ill-advised to dismiss the millions of ordinary Belarusians calling for change. As the battle for Belarus continues to unfold, much will depend on the respective roles of Russia, the democratic world, and the Belarusian security services, who have remained largely loyal but may yet grow tired of their status as regime enforcers. The one thing that seems certain is further turbulence. Belarus has already undergone a period of historic change during the past year, and the coming twelve months hold the promise of plenty more drama.

Belarus dictator Alyaksandr Lukashenka’s terror tactics were thrust into the international spotlight at the Tokyo Olympics when one of his country’s athletes refused orders to fly home early and instead fled to Poland.