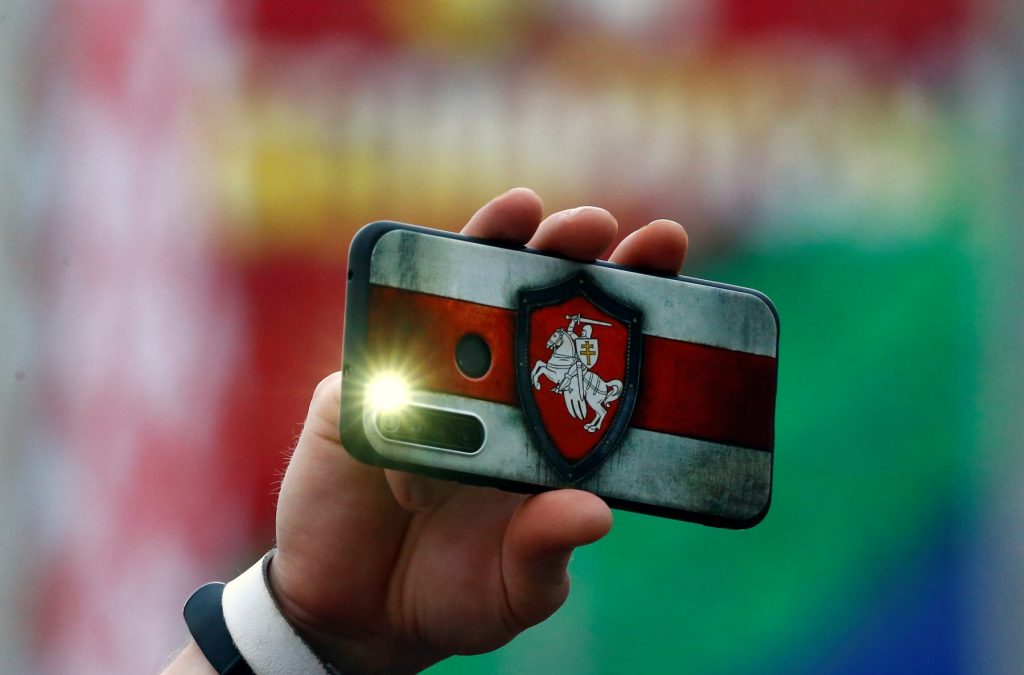 On August 29, the Belarusian authorities arrested dozens of journalists in the capital city Minsk. Following this swoop, 17 journalists representing leading international media outlets such as the BBC, Reuters, AFP, and ARD had their accredited status revoked. This move marked a new stage in the Lukashenka regime’s efforts to regain control of the narrative after dramatically losing the information initiative amid unprecedented nationwide protests over the country’s rigged August 9 presidential election.

Recent steps have included blocks on popular independent websites and sporadic internet shutdowns. Meanwhile, the Belarusian dictator’s propaganda counter-offensive appears to be increasingly in the hands of imported Russian experts. With opposition activists forced to seek ever more inventive ways of sharing their messages, the information sphere looks set to become one of the most decisive fronts in Belarus’s pro-democracy revolution.

Three weeks since the outbreak of nationwide protests, the situation in Belarus remains finely poised. The scale and resilience of the protest movement initially threatened to overwhelm Belarusian President Alyaksandr Lukashenka, but a lack of political leadership among the opposition has since allowed the authorities to regroup. Strong support from Moscow has also proved important, significantly stiffening Lukashenka’s resolve and convincing many within the regime to remain loyal to the man known as “Europe’s last dictator.”

On August 27, Vladimir Putin dramatically escalated his involvement in the crisis by announcing that a reserve of Russian security forces had been formed and was ready for deployment to Belarus if the situation gets “out of control.” This would not be his first intervention in the crisis engulfing Russia’s western neighbor. Some weeks earlier, Moscow sent a number of seasoned Kremlin media professionals to Minsk to take over at Belarus state TV and help manage media coverage of Lukashenka himself.

Some have likened Lukashenka’s new Russian media managers to the “little green men” without insignia who led the Kremlin’s 2014 seizure of Ukraine’s Crimean peninsula. So far, these imported infowarriors have struggled to turn the tide of public opinion back towards Lukashenka. This is partly down to a near-complete lack of public trust in all Belarusian state media, which has evolved little from its Soviet origins.

There are also considerable practical problems due to long-term neglect. Lukashenka never invested in the modernization of the country’s state-run media platforms, which remain strikingly primitive compared to the sophisticated production values and clever delivery of contemporary Russia’s highly weaponized media industry.

Lukashenka’s attitude towards the media reflects his outdated Cold War thinking and explains his regime’s initial emphasis on jamming unwelcome outlets and denying access to foreigners. This thinking creates considerable challenges for his Russian advisers, who are more accustomed to crafting the kind of emotionally appealing multimedia messaging that can strike a chord with modern audiences.

The low standard and credibility problems of Belarus’s state-controlled mainstream media have helped boost the popularity of independent outlets, internet-based channels, social media platforms, and alternative sources of information such as encrypted messaging app Telegram. This trend was evident long before the start of the current protest movement and has proven instrumental in helping to mobilize the nation. The role of non-traditional media first became clear during the election campaign ahead of the August 9 presidential vote, when live streaming of opposition rallies began attracting up to one million viewers. This led to the first wave of arrests, with many of the journalists and bloggers who streamed local rallies still in prison today.

As the election drew closer, pressure intensified. Journalists began to report receiving threats, while authorities used the accreditation system to penalize anyone reporting on events without the proper credentials. International online platforms such as Instagram, YouTube, and Telegram were relatively free from interference, making them the obvious alternative destination for Belarusians looking to remain informed.

Thanks largely to photo and video content shared by members of the public, Telegram accounts such as Belarus of the Brain and NEXTA have been able to accumulate hundreds of thousands of followers and become hugely popular across Belarus. In what remains a largely leaderless political protest movement, these digital platforms have performed an invaluable service. Their importance has inevitably made them targets, with the Belarusian security services seeking to detain individual channel admins and account managers. For example, the man behind the Belarus of the Brain account, Ihar Losik, has been in prison since June.

While the Lukashenka regime employs characteristically heavy-handed tactics in their efforts to gain access to popular Telegram channels, Russian sources have recently begun trying to buy up some of the existing Belarusian Telegram channels with the most traffic. This approach is much easier than attempting to create new channels from scratch. It is believed to be part of Russian efforts to establish a strong presence on the Telegram platform in order to counter the anti-regime messaging that currently dominates. At present, Belarus is perhaps the only country in the post-Soviet space where neither the government nor Russia has a strong presence on Telegram. Kremlin propaganda specialists appear to have identified this as a key weakness and are seeking to rectify it.

The information war that is now raging in and around Belarus is likely to determine the outcome of the country’s pro-democracy uprising. We are currently witnessing what may be the world’s fastest digital transformation as Belarusians respond to Kremlin-style fake news and government censorship by adopting new ways of delivering and consuming independent information. The innovation involved in these efforts is impressive, but international backing is also desperately needed.

Belarus’s vibrant information environment of startup media outlets and citizen journalists requires considerable support if it is to become the basis for political transformation in the country. The list of requirements includes everything from censor-bypassing tools to technologies that will enable content sharing without internet access. Even if they are no longer accredited by the authorities in Minsk, established international media outlets can contribute by amplifying the work of Belarus’s front line journalists. Now would also be an opportune moment to consider relaunching the Voice of America Belarus Service.

Lukashenka will do whatever he can to silence the Belarusian pro-democracy movement. He has already demonstrated a readiness to imprison local journalists and target international reporters while cutting the country off from the internet entirely at strategic moments. Further clampdowns and draconian measures should be expected.

Crucially, in recent weeks the Belarus dictator has added Russia’s infinitely more refined infowar expertize to his own displays of brute force. While Lukashenka himself is famously unfamiliar with modern communications technologies, his Kremlin advisers will help him to shut down protest platforms and drown out opposition messaging with emotionally appealing narratives of their own. Belarus’s revolutionaries have proven highly creative in their media strategies, but they must now contend with some of the world’s leading information warfare practitioners.

Image: Innovative Belarusians have managed to outmaneuver the heavy-handed efforts of dictator Alyaksandr Lukashenka to silence the country's pro-democracy protest movement, but they must now also contend with the far more sophisticated information warfare of Lukashenka's Kremlin allies. REUTERS/Vasily Fedosenko