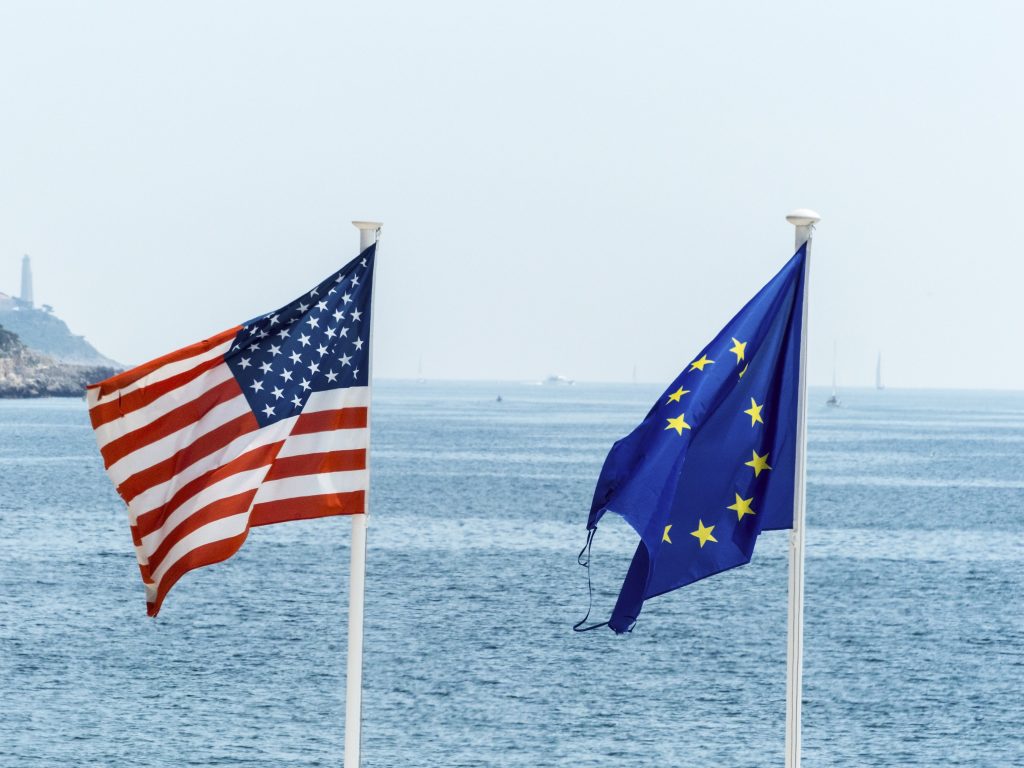 This blog is based on a high-level virtual discussion convened in partnership with the Friedrich-Ebert-Stiftung Foundation on November 19, 2020.

US Congress has passed the annual National Defense Authorization Act, sending the bill, which contains expanded sanctions on the Nord Stream 2 (NS2) pipeline, to President Trump’s desk. The latest round of sanctions will target individuals and companies that assist with finishing the construction of NS2, including those that provide services for vessels used in laying the final hundred miles of the project. While these sanctions might halt the project for another year—and, possibly, indefinitely—they are also putting a strain on the already fragile transatlantic relationship, especially on US-German ties. Unresolved, these tensions will damage President-elect Biden’s agenda to rebuild the US-German, and even US-EU, partnership. Instead of being overly focused on NS2 sanctions, the United States and European Union (EU) need to focus on working together to strengthen European energy security. The United States and EU, particularly Germany, should support energy infrastructure development, competitive and transparent energy markets, and other strategies to mitigate geopolitical energy risks posed by Putin’s Russia, regardless of whether NS2 comes online.

NS2 has many opponents on both sides of the Atlantic. In the United States, the Trump Administration and the Biden-Harris team have each expressed concerns that the project would damage European energy integrity by giving the Kremlin additional means to squeeze Central Europe and Ukraine by withholding gas supplies while continuing to supply Germany. NS2’s supporters still claim that the project is purely commercial, a difficult case to make given Putin’s use of gas as a strategic lever. However, the real argument of NS2 supporters is increasingly that sanctions against German and other European companies are no way to deal with differences among allies, and that canceling the project now would be too costly. US sanctions are seen as an overreach in the EU, even by some of the greatest critics of the project. That standoff is unlikely to change. Yet, it need not be an impediment to US-EU cooperation on initiatives that would contribute to European energy security and address NS2’s risks if it is completed.

NS2’s potential damage could be mitigated through US-EU work on addressing gaps in natural gas access across Europe and seeking to shore up the integrity of an undivided EU gas market. These efforts should include regional and bilateral cooperation with EU member states. Much of this work has already begun through investments in liquefied natural gas (LNG) terminals and natural gas pipelines across Europe. These efforts have already contributed significantly to mitigating the risks of overreliance on Russian energy supplies. Further support for infrastructure that contributes to the diversification of energy sources in Europe will be essential to mitigating the risks posed by NS2. For example, LNG infrastructure in Germany will create greater access to German and European energy markets. This infrastructure will also enable Germany to strengthen relationships with other natural gas exporters, such as the United States and other LNG exporters. The United States and EU should focus on infrastructure development in Central and Eastern European (CEE) countries as part of a coordinated comprehensive energy security strategy for the region. Such a strategy may entail supporting investments in natural gas storage, making upgrades to the existing system where necessary, and exploring potential domestic energy development. Specific attention should be given to Ukraine, since the agreement between Naftogaz and Gazprom, which brings substantial transit revenue to Ukraine, is set to expire in 2024.

In addition to gas infrastructure, cooperation on new technologies such as hydrogen—especially blue hydrogen produced from natural gas—can be a way for the United States and EU to work together on decarbonization while ensuring supply security. Transatlantic support for renewable energy development will help alleviate demand for conventional energy sources, including natural gas. This will improve Europe’s self-sufficiency, which, in turn, will strengthen European energy security.

The United States and EU can finance these essential infrastructure projects by supporting regional efforts like the Three Seas Initiative (3SI). 3SI promotes investment in energy, transport, and digital interconnections across the CEE region. The US International Development Finance Corporation recently approved a $300 million investment into the 3SI Investment Fund, demonstrating US commitment to cooperate on energy security in the CEE region. Germany has an opportunity to be a major supporter of 3SI projects by contributing to the 3SI Investment Fund as well. The United States and EU can also advocate for 3SI to include other members, such as Ukraine and the Western Balkan countries, to increase the impact of 3SI.

In addition to infrastructure investments, the United States and EU can cooperate on supporting the functionality, competitiveness, and transparency of European energy markets. The EU’s Third Energy Package has been successfully adopted across the EU, but there are opportunities to increase enforcement of its rules. The Third Energy Package mandates ownership unbundling, third-party access, and nondiscriminatory tariff regulation for EU pipelines as well as any new gas pipelines originating outside of the EU. For example, if the NS2 pipeline is completed, it should comply fully with the requirements of the Third Energy Package. One of these requirements is that Gazprom’s transmission services must be managed independently from Gazprom’s generation, production, and supply operations. Regulatory implementation should also extend to the non-EU countries that are connected to EU member states through natural gas and electricity infrastructure. These regulatory safeguards are in place to keep energy suppliers from monopolizing the market or withholding energy supply as a lever of influence, as Putin’s Russia has done.

Along with support for the implementation of the Third Energy Package, the United States and EU can begin cooperation on the European Green Deal, which aims to reduce the EU’s reliance on unabated natural gas imports. This is an especially important area of work, since the EU’s proposed carbon border adjustment mechanism (CBAM)—which has been suggested as part of the European Green Deal—could threaten European energy security if improperly implemented. CBAM represents the EU’s effort to impose a tax on imported goods based on their carbon emissions. However, CBAM could also serve as a powerful decarbonization driver, if based on fair and transparent standards for emissions tracking and verification. Natural gas is unlikely to be targeted in the initial round of CBAM regulations, which provides time for the United States and EU to coordinate on CBAM implementation to ensure that natural gas importers are treated fairly and that regulations are standardized. This consultation process would prevent suppliers with poor emissions measurements and transparency from being rewarded by default. Transparency mandates under CBAM will force Russia to compete fairly on carbon intensity with other exporters and reduce its ability to flood the natural gas market with natural gas exports that have unverified emissions.

As European energy markets become more interconnected and energy system services are digitalized, information and operational technologies will likely be exposed to increased cybersecurity threats. Transatlantic coordination on cyber security regulations and threat information-sharing will result in agile responses to digital threats and can serve as another platform to reinforce US-EU ties and bolster European energy security.

In short, The United States and EU should develop a comprehensive strategy on deterring and mitigating Russian influence and aggression in Europe, including cooperation on energy infrastructure and the encouragement of competitive and transparent energy markets. This coordination will be more effective than fighting with each other about unilateral actions to address geopolitical risks from Russian energy supplies. This strategy should be the bridge for working through tensions stemming from NS2 sanctions and for rebuilding the transatlantic relationship.

Read more about this topic

With the Nord Stream 2 (NS2) pipeline’s completion date on the horizon, it is becoming apparent that the European Union (EU) is struggling to agree on how the project should be handled. What are the challenges and opportunities the situation present?