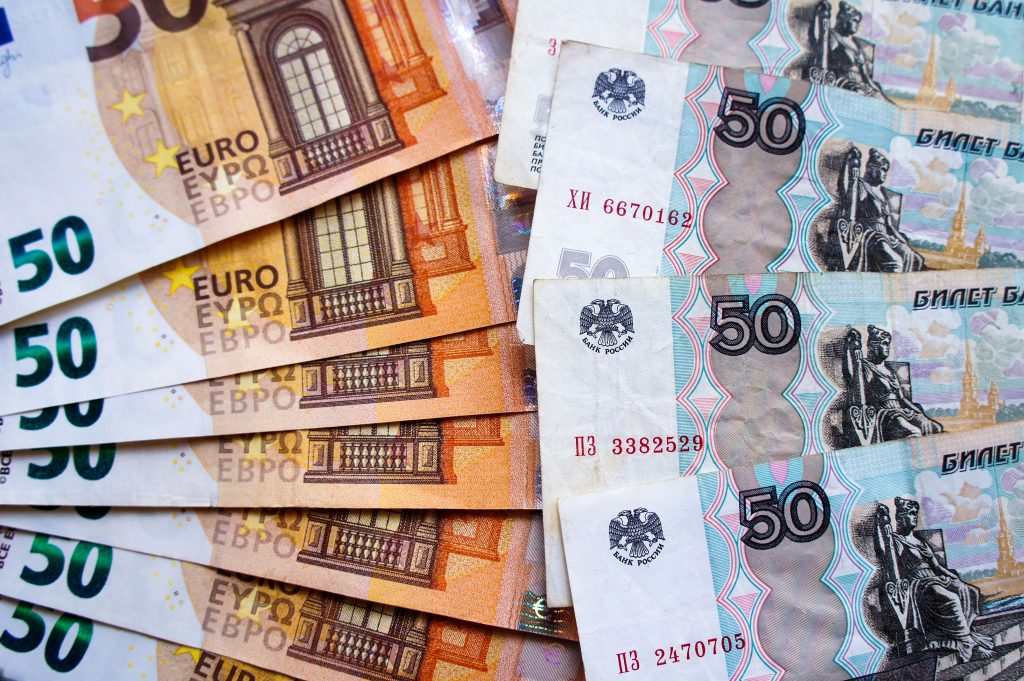 Putin’s presidential decree establishing a ruble-only payment system goes far beyond regulating the currency of settlements. On closer examination, it appears to be a legally dubious and vague document upon which no Gazprom customers could ever safely rely. Amidst the smoke and mirrors of the decree, one can discern a potential real objective: to frame the public opinion before a European gas supply cut-off, either full or partial. But Gazprom’s clients hold several advantages that lower the feasibility and raise the cost of any attempt at enforcement.

Not just a play to save face

The surprising Russian presidential decree on March 31 sent shockwaves through already nervous European gas markets. In the document, Putin sets out his view on how gas payments should be made by European buyers from “unfriendly nations.” He expects all final settlements for gas delivered after April 1 to be executed in Russian currency, not euros or US dollars, regardless of what is stipulated in current long-term gas supply contracts.

It remains unclear just how many of Gazprom’s nearly 150 European clients can agree to change their contracts to accommodate the new procedure. The European Commission has advised Member States against the agreeing to the changes, based on its legal analysis.

But the pressure has become real. On April 26, Polish and Bulgarian officials announced that Gazprom would halt gas supplies to their countries following companies’ refusal to agree to the new payment procedure. President of the European Commission Ursula von der Leyen condemned the situation as the Kremlin’s attempt to blackmail Europe with fossil fuels. She promised an “immediate” and “coordinated” response.

News reports based on sources close to Gazprom have suggested that ten companies have agreed to open ruble accounts in Gazprombank, and that four have already used them. Whether any of them have actually adopted the revised settlement procedure in full has not been confirmed.

Austrian company OMV has commented that it is contemplating sanctions-compliant conversion solutions, though claims that OMV has agreed to adopt the new procedure have been dismissed by Austrian Chancellor Karl Nehammer as “fake news of Russian propaganda.”

Germany’s Uniper, another major buyer of Russian gas, confirmed that it will pay in euros, which would then be converted into rubles. Uniper’s major shareholder, the Finnish state-owned energy company Fortum, commented that Uniper would continue paying in euros, but that certain amendments to the payment process were made.

The public discussion has been focused on whether adopting to the proposed procedure is compliant with the EU sanctions. However, the proposed change has a much more alarming dimension.

The Putin’s initiative is not just about currencies. Unlike what many Russian experts suggest, it is far from a mere face-saving exercise for Putin to display a victory to the Russian public.

The new approach proposed by the decree is a unilateral attempt to change the settlement procedure, a core condition of any gas supply contract. Adoption of the procedure in full would undermine European companies’ ability to defend themselves in Western jurisdictions. They would thus place themselves fully at Russia’s mercy and put their clients at risk of supply interruptions.

Relevant authorities should intervene in this situation based on energy security and national security concerns. Transparency requirements for gas contracts and financial restrictions on gas payments should be introduced in a coordinated manner. The analysis below is based on the original text of the five-page document published by the Russian government (courtesy translation by Reuters can be found here).

The most peculiar are Articles 6 and 7, which set out a new settlement procedure. The customer would have to transfer the money to a hard-currency account opened in Gazprombank. The bank would then convert the funds into rubles at “organized auctions, conducted by the Public Joint Stock Company ‘Moscow Exchange MICEX – RTS'”. Then the bank would send the order to the customer’s ruble account and make the transfer to Gazprom (or its fully owned subsidiary). Only after that process is finished will the settlement be deemed completed. This constitutes a material change of the settlement terms and therefore requires an express amendment to the existing contracts.

The settlement process envisaged by the decree would mean that the customer would have no control over its funds for a certain period of time. Moreover, the exchange rate at the “organized auctions” would be under the full control of the Russian authorities. The timing of such auctions under the decree is also unclear. The customer would have to carry the exchange rate risk and might be required to transfer additional funds to make sure the settlement is made. In this way, the Russian authorities would also have an opportunity to influence the effective gas price and put pressure on the customer.

Another issue with the decree is the vagueness and instability of its terms. Under its stipulations, the Russian Customs Service is entitled to request some documents and decide whether gas supplies to the customer may continue. The Russian Central Bank may issue clarifications and amendments about how the procedure is to be implemented at any time (Articles 10, 14).

The Government Commission for the Control of Foreign Investments in the Russian Federation has the right to provide waivers, but the procedure for this has not yet been publicly disclosed. Other Russian authorities are expected to produce additional sub-procedures for the payment process in the future (Articles 9, 11, 16).

Any customer who voluntarily agreed to this settlement process would face numerous points at which Russian state institutions could interfere with the completion of the settlement. In essence, the Russian state could at any point step in and stop, or at least hold up, proceedings. Furthermore, a customer that voluntarily agrees to implement this decree would effectively lose the ability to execute a clear settlement under its existing contract and would undermine its capacity to bring a case against Gazprom under the arbitration clause of its long-term supply contract.

So far, the Russian President has been meticulous in furnishing a legal backing for his most outrageous ideas, like the annexation of Crimea or using military force against neighboring states. Why would President Putin suddenly abandon even this formal legalism now?

There are a range of answers to this question. The most likely answer, given that the decree is inconsistent with the Constitution, legally vague, unstable, and unworkable, is that in reality there were no real expectations that Europe would agree to it.

If this is the case, the entire arrangement is a smokescreen to justify an interruption of Russian gas flows to the EU. Russia cannot afford a full interruption of gas flows to Europe for more than a few weeks before causing irreparable damage to its own gas production. It is only the beginning of the summer season, but Gazprom already has a very limited free capacity in its underground gas storages in Russia after it curbed gas flows to the EU for more than six months. On the other hand, Europe still has plenty of time to fill its underground gas storages before November.

The vulnerability of Gazprom Export

It is remarkable that German authorities may have perhaps accidentally (and temporarily) forestalled a comprehensive European supply cut-off. Putin’s decree was published on the last day of March. On the same day, Gazprom made an obligatory disclosure revealing that its subsidiary OOO Gazprom Export had exited its key asset, Gazprom Germania GmbH. The company registered in Germany holds a number of important assets which include stakes in large European underground gas storage facilities, three gas transit pipelines (OPAL, NEL and EUGAL), as well as Gazprom’s UK trading arm Gazprom Marketing and Trading Ltd and the group’s liquified gas trader Gazprom Global LNG. The attempted deal, by which Gazprom Germania was sold by Gazprom Export to a no-name shell company, was subsequently suspended by German authorities.

Gazprom Export is a traditional counterparty to the long-term contracts with Western clients on behalf of Gazprom. If an interruption of gas transit is planned by Russia, this company will face a number of legal challenges before arbitration panels for violating the contracts and should expect a significant number of damages claims. In this context, the attempt to remove its valuable assets beyond the reach of such claims before the decree was announced could be another sign that Russia was preparing to halt natural gas flows to Europe. Now that the assets are temporarily held by the German authorities, any such risks will probably be viewed by the Russian leadership as collateral damage.

It is clear that gas trading with the EU is no longer “just a commercial deal” for Russia. More attempts to weaponize Russian energy are likely to follow. An ideal scenario for Russia is if some European customers reject the new terms and are cut off, while others agree. In this case, the Kremlin will have more time to blackmail the Europeans before it runs of storage space, gas prices will jump, and EU member states will struggle internally with serious trust issues.

A coordinated response from the EU is necessary to overturn this plan. Such a response can include a combination of disclosure requirements, sanctions, anti-trust interventions and commercial claims. The European authorities should also keep an eye on Gazprom Export’s assets now in their custody and speed up the process of diversification of gas supplies for the EU. But above all, in the face of Russia’s intensifying attempts to use gas to bend Europe to its will, the continent should know that it still retains a whole host of options.

Aliona Osmolovska is the director of the reform support team at the Ministry of Energy of Ukraine. Previously, she was director of government affairs at Naftogaz, Ukraine’s state-owned energy company. The views expressed here are personal and do not represent the position of any official institution.

Removing Russia from the European gas balance: A major role for Caspian gas

Exporting more Caspian gas to Turkey could free up precious LNG cargoes for consumption in the EU market. Three Caspian options in particular would go a long way to ensuring the EU can get out from under Russian gas hegemony.