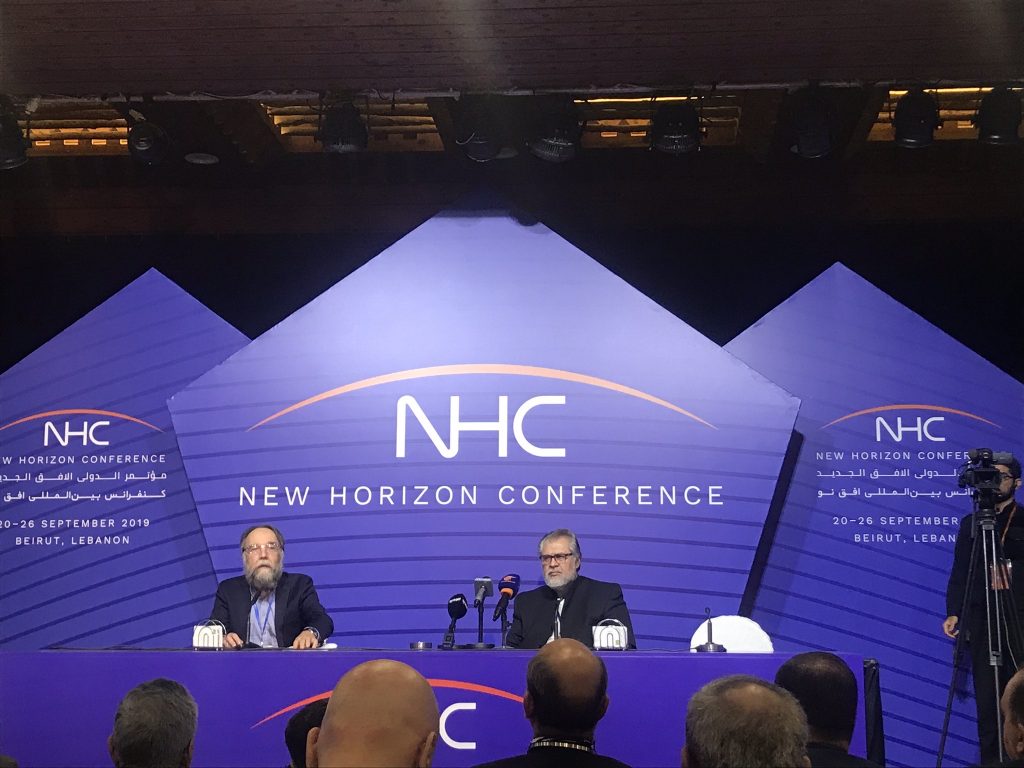 At a resort-style hotel in Beirut’s southern suburbs, speakers at the “New Horizon” conference in September included a Hezbollah MP and a Russian ultra-nationalist ideologue who egged on President Vladimir Putin’s 2014 annexation of the Crimean Peninsula.

The blacklisted conference took place in the Lebanese capital on September 23-25, despite US sanctions on its organizers over allegedly providing intelligence to Iran’s top military forces.

The event—run by an Iranian non-governmental organization and held in Lebanon for the first time in its seven-year history—claimed to provide a chance to discuss the US government’s role in “regional and international instability” and “excessive sanctions.”

What it showed is how US curbs fail to take into account the soft power value of blacklisted events in countries like Lebanon. Although it’s hard to gauge the reach of their messages, their very existence suggests that sanctions aren’t a comprehensive tool.

New Horizon and four of its key organizers, including chairman Nader Talebzadeh, were sanctioned by the US Treasury Department in February over allegedly facilitating contact between US citizens and the Quds Force, the external branch of the Islamic Revolutionary Guard Corps (IRGC). The unit backs the Bashar al-Assad regime in Syria and has trained paramilitaries in Iraq.

The meeting points to Lebanon’s awkward position as a key recipient of billions of dollars of US aid money, while also acting as a vessel for organizations sanctioned by Washington. Since 2005, the Lebanese Armed Forces (LAF) have received $2.29 billion worth of assistance from the US government, which has also supplied 80 percent of its equipment.

“I thought taking the conference to Lebanon might anger OFAC (Office of Foreign Assets Control) and this was one of my intentions—how can we piss off Sigal,” said Talebzadeh, referring to the US Treasury office in charge of foreign sanctions, and Sigal Mandelker, former under secretary for terrorism and financial intelligence. “Lebanon is a nice country, has a pretty good press and is the forefront of the resistance, Hezbollah.”

Talebzadeh is an Iranian filmmaker renowned for directing a film that depicted Jesus from an Islamic perspective. His conference has received funding from Iran’s Imam Reza Shrine, one of twelve main figures revered by Shia Muslims, as well as “private businessmen,” he said.

With the tagline, “A chance to reach peace and truth,” the meeting came against a backdrop of increasing tensions between Gulf countries, the United States and Iran. Although it claimed to promote peace, speakers frequently praised military operations in the Middle East.

Alexander Dugin, the Russian ultra-nationalist speaker, said Moscow intervened to “save” the region. “We don’t see what the west proposes to the Middle East,” he told the audience. “They create chaos, they destroy, they bomb, but don’t propose anything.”

At the sidelines of the conference, Talebzadeh denied allegations of anti-Semitism or providing information to the IRGC.

“We’re just convening,” he explained. “I’d like to have my next conference in Baghdad and talk about why the US should exit Iraq completely—not have a Green Zone, not have military bases, but just leave.”

Asked why Iran should be allowed to have a presence in Iraq—designated Quds Force leader Qassem Soleimani is frequently pictured in the country and has been active there for decades—but not the United States, Talebzadeh said that Iran and Iraq share the same religion.

“Qassem Soleimani is a veteran of our war [the Iran-Iraq war] and he stood out and became a good warrior,” he said. “So they helped Iraqis, and we helped Syrians too. If these crazies of ISIS (Islamic State of Iraq and al-Sham) were not there, Soleimani would not be there.”

As part of his wide regional reach, Soleimani runs Iranian military operations backing Assad forces in Syria, according to the US Treasury. The US-led international coalition fighting ISIS is currently present in Iraq at the invitation of the government in Baghdad. In 2018, the US government provided $1.5 billion in foreign aid to the country.

The New Horizon conference showed the “soft power” that Iranian and Iran-backed organizations hold across the region, despite sanctions. It is one among other fora and cultural institutions in Lebanon, Iraq and Iran—sometimes with visiting speakers from countries such as Bahrain, too—which are organized and attended by pro-“axis of resistance” officials and academics. They support an anti-Western, anti-Israeli alliance between Syria, Iran and Hezbollah.

Lebanese Hezbollah MP Ibrahim al-Mousawi used his New Horizon address to praise the “ascendance of the axis of resistance.”

Although not an official Hezbollah event, it was heavily promoted by media close to the militant group, which was formed by the IRGC in Lebanon during the 1980s. Some members of the press received invitations via Hezbollah’s press office.

“The kind of victories and dignities we are witnessing in Yemen should make every one of us, every human being, proud that people are living up to their dignities,” al-Mousawi told the audience, without specifying what the “victories” were. His comments prompted a round of applause.

Yemen is suffering one of the world’s worst humanitarian crises in a brutal four-year-long war that has seen tens of thousands of people killed, and accusations of war crimes committed by all parties, including the Saudi-led coalition and their adversaries, the Iran-aligned Houthi rebels.

Meanwhile, in Iraq, Shia paramilitaries from the Popular Mobilization Forces (PMF) organized a conference in April, “Our Blood is One,” in order “to give back to those who partnered with Iraqis in their fateful battle” and “to honor the families of the martyrs of the Iranian Islamic Republic who shared the fighting with Iraqis in the battles of honor against [ISIS] terrorist organizations.” Some PMF brigades align with Tehran and the organization’s deputy chairman Abu Mahdi al-Muhandis was sanctioned in 2009 over attacks on Iraqi security forces, and for advising Soleimani.

As well as an open admission of the Islamic Republic’s military involvement in Iraq, the event was a means of furthering the narrative that Iranian security forces should be Iraq’s preferred partner when it comes to defeating terror groups in the country, over US or other western militaries. While the presence of Iran-backed PMF groups on the ground in Iraq has been evident throughout campaigns against ISIS, such memorial events complement military action, religious messaging and social support networks provided by Iran-aligned paramilitaries. Combined, these elements create a long-term narrative around a fruitful relationship between the two countries.

IRGC or no IRGC, the New Horizon conference highlights the power of events billed as intellectual fora in spreading “axis of resistance” ideas on the Middle East. Despite multiple curbs by the US Treasury, they continue. It’s difficult to sanction thought.

Hezbollah won’t stand down in a US-Iran conflict

On January 28, 2015, a colleague and I were driving north in Lebanon’s Bekaa Valley to report on the latest developments involving the Islamic State of Iraq and al-Shams (ISIS), which was then occupying a desolate mountain range straddling the Lebanon-Syria border. Shortly before midday, we received news that Hezbollah had just launched an ambush against an Israeli military convoy on Lebanon’s southeast border.

IRGC designation: a lost opportunity to weaken Hezbollah in Lebanon

Designating Iran’s Islamic Revolutionary Guard Corps (IRGC) as a foreign terrorist organization (FTO) stirred panic in Lebanon. Hezbollah’s allies in the Lebanese government—such as the Free Patriotic Movement (FPM) and Amal—worried they too would soon bear the brunt of American sanctions.