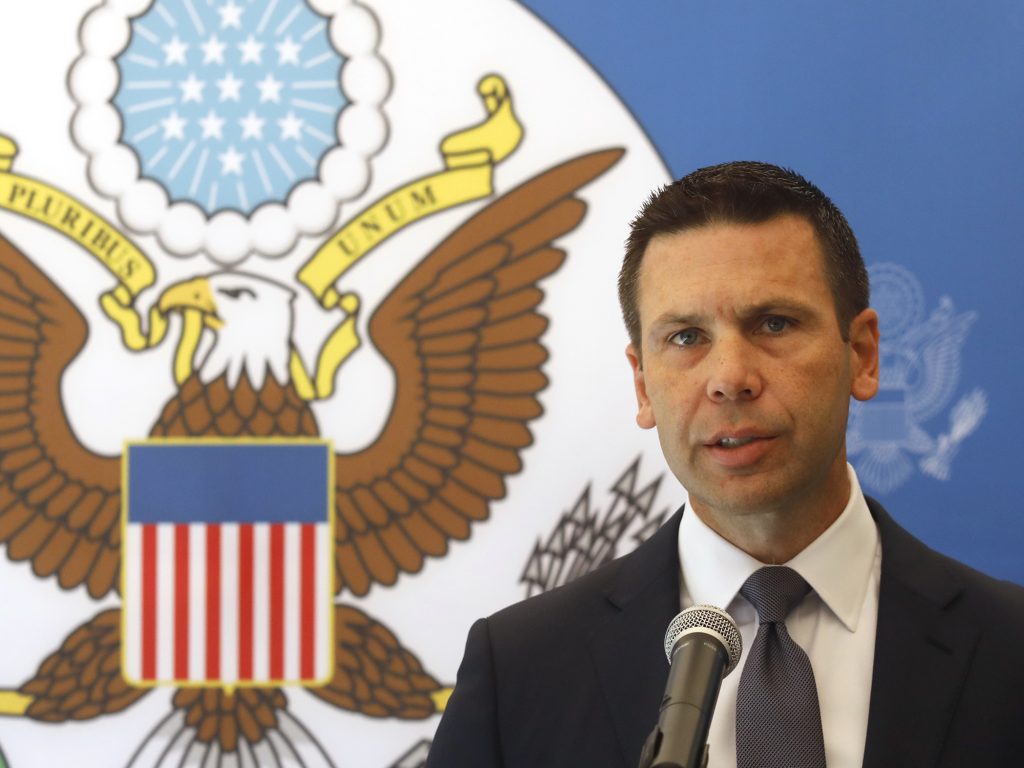 Acting US Secretary of Homeland Security Kevin McAleenan unveiled on September 20 the new Department of Homeland Security (DHS) “Strategic Framework for Countering Terrorism and Targeted Violence.” For the first time, a formal Trump administration departmental strategy explicitly calls out white supremacism as “one of the most potent forces driving domestic terrorism.” In most other respects, the strategic framework did not break new ground. DHS’s real challenge will be whether its new counterterrorism (CT) framework will get the resources and political support DHS needs from the White House and the Congress.

This is the first departmental strategic framework in the Trump administration to call out white supremacism as a major domestic terrorism threat.

The DHS framework notes that domestic terrorism has caused more deaths in the United States in recent years than al-Qaeda, ISIS, or other foreign terrorist organizations (FTOs). The framework identifies “White supremacist violent extremism” as “one of the most potent forces driving domestic terrorism.” DHS publicly names some of the social media sites used by white supremacists, including the one used by perpetrators of the April 27 shooting at a synagogue in Poway, California that killed one person and the August 3 shootings at a Walmart store in El Paso, Texas that killed twenty-two people. DHS says it is vital that the department helps state and local partners counter the influence of terrorists and violent extremists in online space, and notes that both radical Islamist terrorists and white supremacist violent extremists have been “essential to their recent growth.”

DHS’s real challenge will be whether its new counterterrorism (CT) framework will get the resources and political support DHS needs from the White House and the Congress.

In May and June, officials from DHS, the FBI, and Department of Justice (DOJ) testified before subcommittees on the Hill about domestic terrorism and white supremacism, but this DHS framework is the first detailed strategic acknowledgement of the significance of the white supremacist terrorism threat.

The key issue is whether the White House and the Congress will support and resource this strategic framework.

The DHS framework lays out four goals, but the framework makes clear at several points that DHS will need more specificity and additional resources, including for grants to states and localities, to achieve its CT goals. DHS did not request additional funds for community grants in time for its FY 2020 budget request, and earlier this year, Congressional Democrats held up an out-of-cycle DHS request for funding for community grants, citing concerns over how the Trump administration would spend the money.

Goal 1: Understand the evolving terrorism and targeted violence threat environment and support partners in the homeland security enterprise through this specialized knowledge.

Goal 2: Prevent terrorists and other hostile actors from entering the United States, and deny them the opportunity to exploit the nation’s trade, immigration, and domestic and international travel systems.

McAleenan acknowledged to an audience on September 20 that DHS is working on an implementation plan to provide the required specificity. He said DHS was surging personnel to the domestic terrorism threat, but DHS recognizes such a surge is not sustainable. “We need to more fully resource this effort,” McAleenan said.

McAleenan indicated the possibility of renewing the request for funding for the Office of Targeted Violence and Terrorism Prevention (TVTP), which would administer grants called for in the framework for state and local governments. In a question and answer session afterwards, the senior official performing the duties of the under secretary for Policy said that DHS was an appropriations cycle behind where they wanted to be. Current work is directed at getting the resources for this strategic framework into the FY 2021 budget that will start October 1, 2020—in other words, though he did not say it, a little more than a month before the November 3, 2020 presidential election.

In tone and in substance, the new DHS CT strategic framework matches the White House National Strategy for Counterterrorism, which was released on October 4, 2018. Both strategies were written by counterterrorism professionals, not political appointees. Both speak dispassionately about the current terrorism threats to the United States, with the DHS CT framework including references to the attacks, many by white supremacists, that occurred after the National Strategy was released. This included the October 27, 2018 killing of eleven Jewish worshippers at the Tree of Life Synagogue in Pittsburgh, Pennsylvania; the killing of one worshipper at the Chabad of Poway synagogue in California in April 2019; and the killing of twenty-two shoppers at a Walmart on August 3, 2019, in El Paso, Texas.

The fourteen objectives in the DHS CT framework include a number of points that will appeal to CT professionals inside and outside government. For example, DHS will:

Goal 1 of the framework is directed at improving DHS’s understanding of the threat environment. Primary responsibility is likely to fall on the DHS Office of Intelligence & Analysis to develop a draft of the annual threat assessment, and to increase information sharing with state and local governments.

Goal 2, preventing terrorists from entering the United States and denying them the opportunity to exploit the nation’s trade, travel, and immigration systems, represents the largest and most traditional part of DHS’s CT mission. Here, the strategy calls for evolution, not revolution. DHS will try to increase CT capabilities of foreign partners, increase its support for the new National Vetting Center, and build on United Nations Security Council Resolution 2396’s requirement for all UN member states to establish airline passenger information systems, use biometrics, and establish terrorist watchlists. Security Council Resolution 2396 (Dec. 2017) still represents the Trump administration’s greatest diplomatic achievement in counterterrorism to date.

Goal 3 is the first detailed description of DHS’s plans for “terrorism prevention,” referring to the programs known in the Obama administration as “countering violent extremism.” The CT framework combines terrorism prevention with a new focus on “targeted violence,” which refers to any type of attack against specific groups of civilians, regardless of specific motivation.

Goal 4, enhancing infrastructure protection and community preparedness, focuses on the defensive side of DHS’s CT activities. These activities have become increasingly important because of the recognition that small-scale terrorist attacks are nearly unpreventable, such as active shooters or someone who would drive a truck at high speed through pedestrians, as happened in New York City on October 31, 2017.

The strategic framework calls out the need to protect American democracy from foreign disinformation that could result in violence here in the United States.

One point worthy of being singled out is Objective 3.5, increasing the American public’s resilience against disinformation operations. Some might consider this as somewhat afield from traditional DHS CT activities. Today, however, foreign interference in US democratic processes through disinformation and other means is one of the most serious threats to American democracy. There is a terrorism nexus to disinformation operations, albeit limited. Iran, the leading state sponsor of terrorism, started several years ago to carry out disinformation and influence operations. ISIS, in its heyday, used professional-looking publications to try to persuade American Muslims not to participate in US elections.

While these efforts had limited effectiveness, and US countermeasures have improved since 2016, foreign adversaries—especially Russia, China, and Iran—have improved their efforts since 2016. Additionally, to the extent that governments that carry out disinformation operations publicly disavow responsibility for their actions, as Russia did after the 2016 election, it means those actions are often carried out by non-state actors. Depending on the harm inflicted, this could meet the definition of terrorism under the Homeland Security Act of 2002.

The DHS CT framework says DHS “is committed to implementing a more comprehensive effort to tackle disinformation operations threatening the American polity, particularly those that promote violence.” The priority actions include developing an “information literacy” toolkit to raise public and media awareness of disinformation campaigns and how the American people can resist such influence. If foreign influence targets specific communities in the United States—as Russian efforts in 2016 targeted Americans by race—DHS will provide information to community stakeholders to help them counter such campaigns.

Two words are striking by their absence or near-absence in the DHS CT strategic framework.

First, “wall.” The word “wall” does not appear in the DHS CT strategic framework. Building a physical barrier on the southwest border will have to be justified—or not—based on its contribution to immigration enforcement, counternarcotics, or some other law enforcement purpose. Not counterterrorism.

Second, “Iran.” The name Iran appears only once, for Iran’s backing of Hizballah in Lebanon. Iran was designated as a State Sponsor of Terrorism in 1984 and has been considered as the leading state sponsor of terrorism, according to State Department terrorism reports by administrations of both parties going back two decades. DHS has a key role in enforcing Secretary of State Mike Pompeo’s April 2019 designation of the Iranian Islamic Revolutionary Guards Corps as a Foreign Terrorist Organization under the Immigration and Nationality Act.

DHS is also deeply involved in defending against Iran cyber attacks, which DHS in the Obama administration considered to be terrorist acts because the cyber attacks were carried out by non-state actors—thus coming within the definition of state-sponsored terrorism. DHS carries out a wide range of other actions—including screening travelers and prospective Iranian students, and counterproliferation enforcement—to prevent Iranian-sponsored terrorism. DHS deserves credit for its actions to counter Iranian efforts to spread its influence in the United States.

Thomas S. Warrick is a nonresident senior fellow with the Middle East programs at the Atlantic Council. Warrick was the DHS deputy assistant secretary for Counterterrorism Policy until June 14, 2019. He was involved in the development of the strategic framework’s goals, but most of the text was written after he left the Department.

The United States is adapting to the cyber challenge, says top DHS official