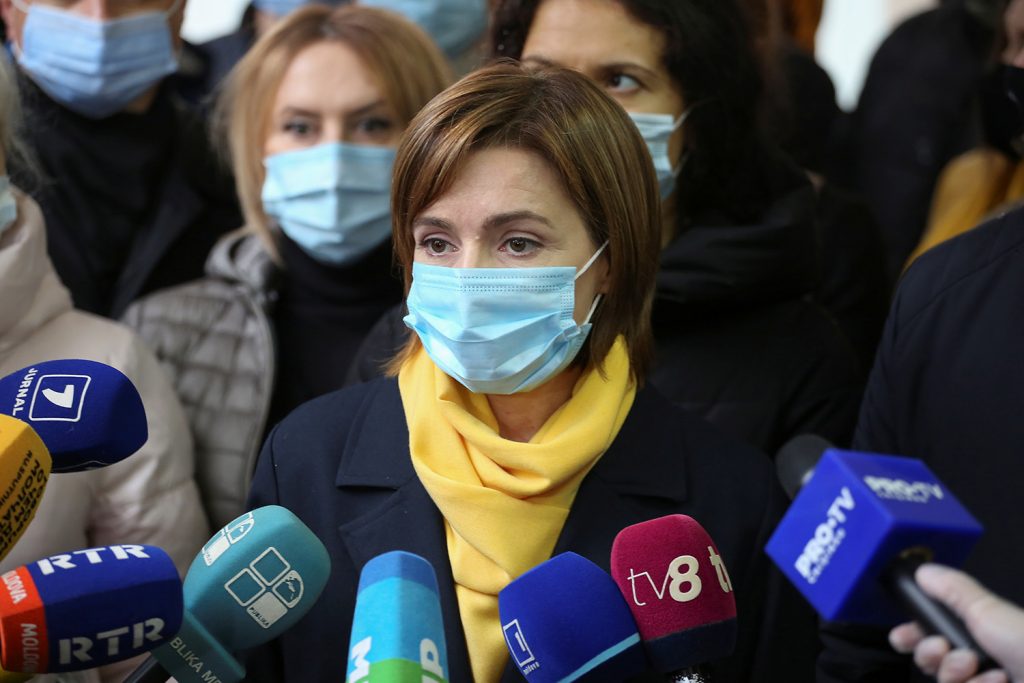 While many are already looking to the January run-off elections in the US state of Georgia, another run-off looms in Eastern Europe. The Republic of Moldova is in the midst of a tightly contested presidential election colored by a frustrated electorate, foreign influence in its politics and economy, and rampant misinformation on social media. The first-round election saw pro-European candidate Maia Sandu win 36 percent of the votes, finishing just ahead of President Igor Dodon, the pro-Russian incumbent, who garnered 33 percent.

Sandu and Dodon will compete in a runoff election on November 15 with immense ramifications for Moldova’s domestic reform efforts and geopolitical orientation. With higher turnout expected in the second round, it’s anyone’s guess which of these two heavyweights of Moldovan politics will win and set their country’s course for the next four years:

Atlantic Council experts analyze Moldova’s presidential elections and what recent developments mean for the country and the international community:

“Maia Sandu stands out as an honest and intelligent pro-Western and pro-reform politician, who has persistently fought for the establishment of the rule of law in Moldova, which is the most important question for Moldova’s development. She has opposed both pro-Russian socialists and corrupt oligarchs, the two forces that have dominated Moldovan politics since independence in 1991. She has assembled the pro-reform and anti-corruption forces in the country. She has called on the United States to sanction the dominant Moldovan oligarch, Vlad Plahtoniuc, for corruption and human rights crimes according to the Global Magnitsky Act, and the United States has refused him a visa.

“In June 2019, Sandu became prime minister by entering a coalition with the socialists. During her brief government, she focused on cleaning up the corrupt law enforcement. However, when she attempted to purge corrupt prosecutors in the prosecutor general’s office, her socialist coalition partners and the dominant oligarchic party voted her government out. Untypically for Moldova, she fell on principle, accepting her own ouster rather than assent to a corrupt office in her government. Therefore, it is particularly gratifying that she received 36 percent in the first round of the Moldovan elections. By voting for Sandu, Moldovans are standing up for the rule of law, a marked change from previous years, where corrupt forces have always enjoyed a popular majority.”

Anders Åslund is a resident senior fellow at the Atlantic Council in Washington. His most recent book is “Russia’s Crony Capitalism: The Path from Market Economy to Kleptocracy.”

Western support for reform must continue

“Moldova’s November 15 runoff election pitting Maia Sandu, head of the pro-European Party of Action and Solidarity, against the incumbent leader of the pro-Russian Socialist Party, President Igor Dodon, will likely come down to the wire. Although Sandu received the highest vote total in last week’s first round, a first round “win” doesn’t necessarily mean she is favored. Winning 36 percent of the first round means Sandu will have to delicately negotiate with some of her political rivals—many with rather suspect reputations—to entice their supporters to choose her instead of Dodon. This may prove to be a difficult task.

“Moldova doesn’t attract the same international attention as neighboring Ukraine and has been overshadowed in recent months by the stolen presidential election in Belarus. However, the international community needs to pay attention to and support this feisty, albeit struggling, country. Indeed, Moldova sits in a unique position with the European Union on its western border and the Russian military (in the separatist region of Transnistria) on the eastern slice of its own territory.

“The United States and the European Union should continue their support for political reforms, economic development, and human rights in Moldova. Sandu and her party represent the best route for Moldova to deepen its economic and political ties to the West and serve as a counter to Russia’s persistent interference and efforts to destabilize the country. Sandu’s path to victory is dependent on turnout among Moldova’s diaspora, estimated to comprise as much as 40 percent of Moldovan citizens. The strong majority of Moldovans living abroad—most of them having fled the country to seek better-paying jobs—support Sandu and her democratic, pro-European platform. Making sure Moldovan embassies in the EU and elsewhere are prepared to process and handle the November 15 runoff voting will be crucial to ensure the will of Moldovan citizens is respected.”

Tim Fairbank is a non-resident senior fellow at the Atlantic Council.

Civil society must be ready to react

“According to the preliminary findings from independent observers, including the Organization for Security and Cooperation in Europe (OSCE) Office for Democratic Institutions and Human Rights’ (ODIHR) monitoring mission and European Network of Election Monitoring Organizations’ (ENEMO) observation mission, the presidential elections were organized professionally with only minor irregularities. The environment for traditional and online media remains a point of major concern, however. Despite protracted efforts on the part of government, civil society, and the international community to try to improve the legal framework for media and free expression, government instability over the last two years has made it nearly impossible to consistently advance the media reform agenda. According to Freedom House’s Election Media Watch report on Moldova, the polarized, highly concentrated nature of the media environment contributes to politically biased coverage on traditional media, and misinformation, influence operations, and hate speech on social media. The COVID-19 pandemic has exacerbated these existing issues, especially journalists’ access to information of public interest, which was an early target of Moldova’s pandemic-related restrictions.

“Under electoral conditions in Moldova, these challenges are even more acute. The presidential elections are no exception. Promo-LEX, an independent watchdog organization, documented biased and highly partisan media coverage for all the presidential candidates. While it is important to acknowledge that false or misleading information from Russian sources affects the environment, the bigger threat comes from domestic disinformation campaigns. These typically originate from mainstream media, government officials, and oligarchs. Several journalists and civil society actors who are generally sympathetic towards Maia Sandu, but are harsh critics of President Dodon, were the latest targets of a campaign, led by Socialist Deputy Bogdan Tirdea, that sought to discredit them as “agents” of Western influence.

“As Moldova heads into runoff elections on November 15, it is critical that citizens receive objective, accurate information from the media. In turn, it cannot be overstated that civil society plays an important watchdog role in ensuring that inauthentic behavior and misinformation campaigns online are curtailed. Civil society actors successfully managed this in 2019 around the parliamentary elections, so it is important that they be ready, with support from the international community, to react for these elections as well.”

Gina Lentine is a senior program officer with the Europe & Eurasia program at Freedom House.

Ukraine’s recent local elections were primarily a referendum on the quality of local governance in the country, and the result was a resounding vote of confidence in the existing municipal authorities.

“Kyrgyzstan stands at a dangerous crossroads,” Noah Tucker says, “with leadership in parliament and the executive now firmly held by an unelected leader.”

A strategy for Moldova

By Anders Åslund and Timothy Fairbank

The Republic of Moldova, a sliver of land bordering the European Union (EU) and NATO’s eastern edge, finds itself at a critical crossroads twenty-seven years after gaining independence from the Soviet Union.