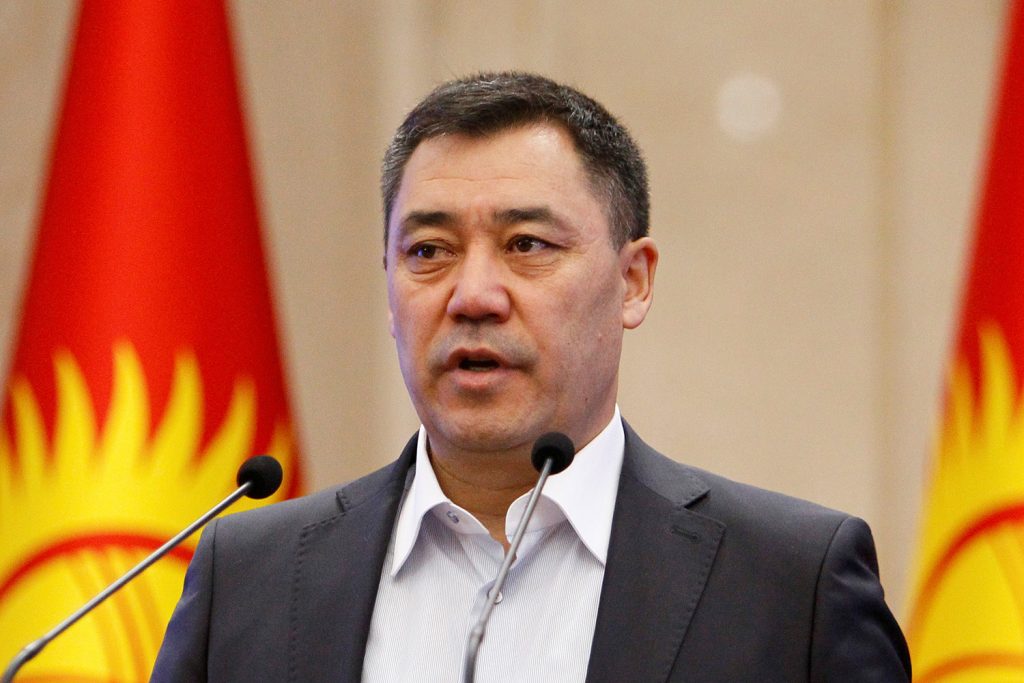 But those hopes have dimmed in recent weeks as recently imprisoned politician Sadyr Japarov has consolidated power, taking over as prime minister before installing himself as the acting president. It’s unclear how far Japarov is willing to go to fight corruption and whether new elections in January will result in the free and fair political competition sought by this month’s protests.

Atlantic Council experts respond to regime change in Kyrgyzstan and what recent developments mean for the region and the international community:

“The new president of Kyrgyzstan, Sadyr Japarov, has come to power in the most unusual circumstances. Kyrgyzstan has faced such extraordinary instability because political leaders had institutional incentives that encouraged corruption. With one six-year term mandated by the constitution, short time horizons meant that presidents prepared for their departure as soon as they came to power.

“Predatory behavior and corruption on the part of government officials over the years have bankrupted the state and led to a collapse of service delivery in many spheres. Now in power, Japarov is the president of a corrupt and shrinking government apparatus that has lost enormous public trust.

“Rather than targeting reform, his first actions focused on coalescing his own power. He said he would hold quick elections for a new parliament in December (after the Central Election Commission nullified the results of the October elections due to corruption). He signed a bill postponing those elections until March. Rather than side-step the constitution, which says that interim presidents cannot run for full terms, he says he will step down from his position as president in early December so that he can run in the new presidential elections, which have been announced for January. He says he will still propose constitutional reform that will transform the country from a parliamentary to a stronger presidential system.

“The delays and constitutional changes are ominous signs for stability in the country. Japarov is trying to coalesce his power from a very weak position. Although he seems to be quite popular with many, especially among working-class and rural voters outside the capital, Kyrgyzstan is facing an extraordinary crisis. The country is witnessing a dramatic surge in COVID-19 cases, a health care system that is broken, and economic collapse. The government is reporting vast budget shortfalls.

“Japarov comes to power at a time when expectations for him among citizens are quite high, but he has few resources with which he can deliver upon his many promises. This makes him vulnerable to the influence of organized crime groups and foreign powers, who have financial resources the state lacks. Rumors are swirling about his ties to such groups and whether they helped bring him to power. He has given a surprise financial amnesty to some with alleged ties to criminal syndicates, such as Raimbek Matraimov, the former deputy customs chief who allegedly returned millions of dollars to state coffers under this amnesty. The government has also reached out to foreign donors and Russia, promising that it will be a reliable partner in the future. Countries such as China and Russia have invested heavily in Kyrgyzstan with little to show for it. It is unclear if their patience has worn thin. Japarov is under extraordinary pressure to deliver quickly but has few resources to do much—at least legally.”

Jennifer Murtazashvili, director of the Center for Governance and Markets and associate professor of International Affairs at the University of Pittsburgh

“Kyrgyzstan stands at a dangerous crossroads, with leadership in parliament and the executive now firmly held by an unelected leader. Japarov claims to “speak for the people,” but also that their message is somehow that their “mentality” is not prepared for representative democracy. The vision Japarov has so far hinted at calls for constitutional changes that would radically weaken the parliament—a parliament that for all its flaws has been an arena of non-violent political competition. If he succeeds in forcing through his own vision for a political transformation toward a system of institutionalized strongman rule, rather than consolidating into pseudo-democratic dictatorship like Tajikistan of 2020, Japarov’s vision built on a narrow circle of supporters from a single region risks an abrupt fragmentation that in the best case produces only more frequent government collapse and “revolutions,” and in the worst case risks collapse into a regionalized civil war like Tajikistan and Georgia in the 1990s.

“While the United States and EU may have less political and economic leverage to influence these outcomes compared to Russia and China, they have an enormous role to play in supporting transparency and ensuring that the people of Kyrgyzstan have platforms to speak out for themselves, so that self-styled populists cannot claim to speak for them without their input. Support for investigative reporting on corruption has been key to advancing political change in the face of threats against journalists and political pressure and the free media. The US Congress should ensure that RFE/RL and Voice of America are fully funded and secure from political influence at home and in the region, and US and international diplomats must continue to protect journalists under threat from attacks on critical reporting.

“The US intelligence community and Treasury Department have a wealth of information on organized crime and its potential to influence the political process in Kyrgyzstan. The US embassy in Bishkek has already taken an important and rare step in using that information to speak out against intimidation and interference by organized crime in the protests this month. By continuing to take a stand against criminal actors and sharing as much information as possible about their activities, the diplomatic community can help add much needed transparency to rapidly evolving political changes. It can empower the people of Kyrgyzstan to demand a renewed fight against corruption that doesn’t transform again into a weapon for those in power to punish political enemies while plundering the national wealth.”

From one failed strongman to another

“There is an old Chinese saying to “cross the river by feeling the stones.” It seems that the recently appointed prime minister Sadyr Japarov is trying to rush through rough waters. He has proposed a new draft of the constitution and wants to participate in the upcoming presidential election. He continues to offer controversial ideas regarding the political system’s future composition and has appointed odious cadres to top government positions and state-owned companies.

“Given falling government revenues, Japarov has announced an “amnesty of capital” to urge corrupt officials to contribute to the state budget by taking their businesses out of the shadows in exchange for immunity from prosecution. This is easy to say but impossible to implement in Kyrgyzstan, where shadow business, according to one estimate, makes up almost 40 percent of the economy. Thus, Japarov has exacerbated the conflict in the country, and discontent regarding his policies has grown. So much so that in the months to come, some of his supporters may eventually turn against him.

“Russia and China have each paused most of their financial assistance programs and will wait things out on the sidelines until Kyrgyzstan gets legitimate leadership. The Kremlin rightly anticipates that Japarov or any other new Kyrgyz leaders in desperate need of money and support will be forced to rely on Moscow’s protection. Without a clear timetable on new elections and a lack of information on substantive changes to the Kyrgyz constitution, who this new leader might be remains unclear. Nevertheless, the EU and the United States must maintain active support for the legitimate constitutional process and democratic forces in Kyrgyzstan. Western support can save Kyrgyzstan from the appearance of lurching from one failed strongman to another.”

Dr. Baktybek Beshimov, Professor of the Practice in the Global Studies and International Relations program at Northeastern University

“For ten days the popular uprising and the elite power shift in Kyrgyzstan had the country balancing between a semblance of political process and total chaos.

“When the dust settled, President Sooronbai Jeenbekov lost out to Sadyr Japarov, who just days before had been in prison serving an eleven-year sentence. There are allegations that some people in the Japarov orbit, just like their predecessors, are corrupt or have organized crime connections. That does not bother Kyrgyzstan’s former imperial master, Russia. In a drama reminiscent of the 2014 Euromaidan days in Kyiv, Moscow failed to impose and enforce an agreement that would keep Jeenbekov in power at least through the elections rerun. While wringing his hands, Putin signaled that the Kremlin will work with whoever stays in power before and after new parliamentary elections later this winter.

“China, which is already a predominant economic power in Kyrgyzstan and increasingly throughout Central Asia, “expressed concern” about chaos in Bishkek, but did not do much—even as Chinese businessmen were harassed and a Chinese-owned refinery halted production.

“Both great powers have other fish to fry. Russia is up to its eyeballs in the Nagorno- Karabakh conflict, where it is keeping a wary eye on frenemy Turkey and punishing Armenian Prime Minister Nikol Pashinyan; in Belarus, where it is supporting Alyaksandr Lukashenka’s brutal suppression of a peaceful popular uprising while plotting his succession; as well as handling the botched poisoning of Aleksey Navalny, and facing the increasingly hostile European Union and the United States, both of which are in the process of imposing additional sanctions on the Kremlin. Kyrgyzstan was a surprise and became an afterthought.

“China is engaged in escalating friction with United States, Taiwan, India, and Japan. It manages repressions in Hong Kong and Xingjian, and does not currently have the appropriate knowledge, expertise, and tools yet to play an imperial power on its mountainous border with Kyrgyzstan. This will change one day, to Moscow’s detestation.

“The United States and the EU did not have a dog in the Kyrgyzstan fight, and blandly expressed their preference for political stability. The two key regional powers, Uzbekistan and Kazakhstan, do not have vital national interests to justify intervention.

“Thus, surprisingly for now, the low stakes, the small economy, and the lack of the acute geopolitical competition over the country or its resources have allowed Kyrgyz elites to slug it out on their own so far. Once he consolidates his power, the regional and global actors will present Japarov with tough tests, which may turn out to be even more complicated than the internal power equations he seems to have solved so far.”

Kyrgyzstan gripped by political chaos again: What comes next?

For the third time in fifteen years, citizens in Kyrgyzstan rose up in protest, as opposition groups took over government buildings amidst charges of vote rigging in the recent parliamentary elections. Atlantic Council experts respond to the recent instability in Kyrgyzstan and what it means for the region and the international community.

Easy answers to the Eurasia region have long eluded both a Trump administration and Vice President Biden when he served in the Obama administration—will an electoral victory now give the next US president the momentum needed to manage these foreign policy challenges?

Disproving the discourse of danger: Kazakhstan at thirty

Central Asian independence in the 1990s spawned enormous anxiety among observers who foresaw cascading threats of Islamic terrorism, internecine war, ethnic conflicts within or between these states, or violence between Russian settlers and their new governments. Thirty years on, Kazakhstan has steered past many of these potential flashpoints and avoided the “discourse of danger.”