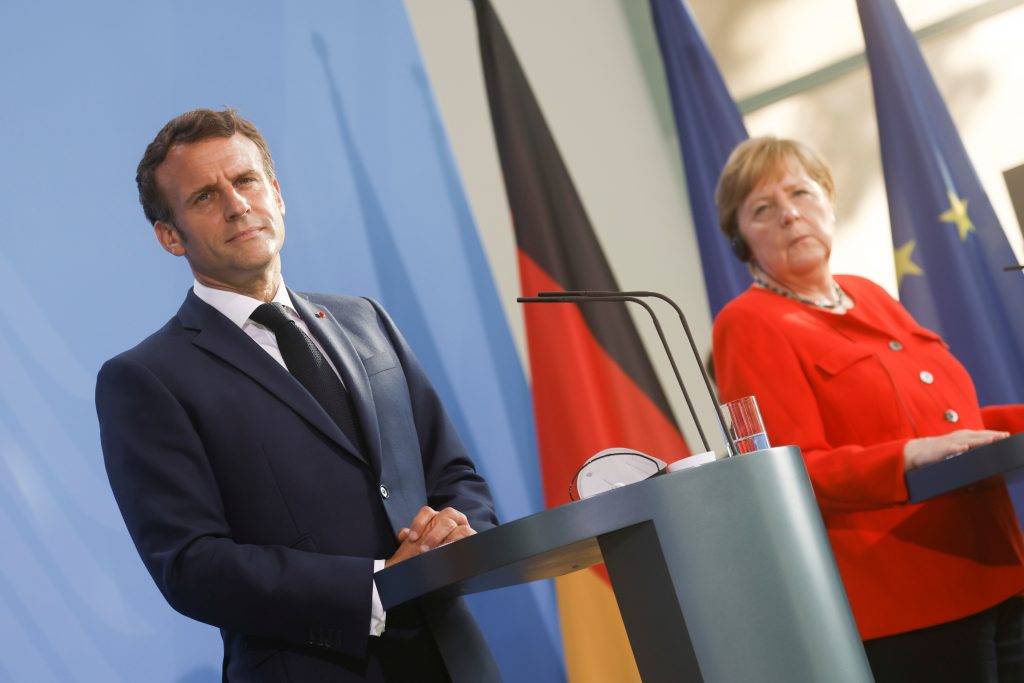 The Franco-German proposal for a European Union (EU) summit with Russia—doomed from the start and rejected on June 25—sheds light on deep dissension within the European Council on relations with Russia and the work that must still be done to develop foreign policy in Brussels.

At least three issues hobbled the idea championed by French President Emmanuel Macron and German Chancellor Angela Merkel: a lack of consultation, no articulation of expected results, and a dose of suspicion.

Central and Eastern European members of the EU questioned the motivations of the two nations and Austria, whose chancellor supported the proposal, given perceptions of German stubbornness in completing the Nord Stream 2 gas pipeline and appeasement of Moscow; France’s project for a “security and trust architecture” with the Russian regime (though this project is probably now brain dead, as the French minister of the armed forces said a year ago that dialogue with the Kremlin had not produced results); and Austrian banks’ exemptions from sanctions against Russia.

The timing of the proposal didn’t help. Still lingering is the sting of the disastrous February visit of the EU’s top diplomat to Moscow. EU and NATO members have pointed to a certain cognitive dissonance: on the one hand, the firm NATO summit communiqué issued on June 14 and the European Commission’s document, endorsed by the Council, defining the strategy toward Moscow (“push back, constrain, and engage”), and on the other hand, the conciliatory tone of the German and French leaders after the EU summit. Separate press conferences by Merkel and Macron, in which each affirmed an intention to continue discussions with the Russian president, did not help reassure those countries that are most reluctant to “engage” with Vladimir Putin’s Russia. In the EU document, moreover, the word “engage” itself remains ambiguous—a term that seems either purely stylistic or like license for the EU to salami-slice the various issues at play in its relations with Putin’s regime.

The third phase of development

There is an upside to this episode, however. It highlights three decisive points for developing EU foreign policy, which is a third phase of work for the EU following economic integration and the development of common values. These are: method, legitimacy, and substance.

Regarding method, there can be no common EU foreign policy without prior consultation. It was in this spirit that I once proposed the appointment of a special presidential envoy for Central and Eastern Europe (including outside the EU) in order to bridge the gap between Paris and these countries. This lack of a direct and regular channel between the French president and political forces in those regions explains a lot about current misunderstandings within the EU.

During the first phase of economic integration, some countries—including France and Germany—adopted the method of blazing trails that corresponded to the spirit of the EU’s treaties and members’ common interests. Franco-German collaboration has extended over decades and overcome some members’ reservations, including in the formulation of a post-pandemic recovery plan.

During the second stage of development, members were better able to play a role in constructing a foundation of common values. The endeavor corresponded to a common will and occurred in a more consensual context than exists today.

But when it comes to foreign policy—the third aspect of EU development—the interests and perceptions of members are still too divergent to build a genuinely common foreign and security policy and fulfill the promise of a powerful Europe—an objective often invoked by Macron himself. France and Germany, which are divided on relations with Turkey and other matters, cannot serve as a latter-day directoire that marginalizes and silences others. As much as the Mediterranean countries are at the forefront of defining policy toward Turkey, Libya, and other Maghreb countries, so too are the countries of Central and Eastern Europe regarding policy toward Moscow.

The question of method leads to matters of legitimacy. In an integrated entity that aspires to power, such as the EU, the legitimacy of a foreign and security policy is based on that entity’s capacity and resolution to respond to threats.

There are no countries in this ensemble of twenty-seven that are more legitimate than others, though perhaps those that are most threatened should be heard first and heeded. Each member must learn about how history has shaped other members; Western Europe, for instance, must perceive the legacy of 1989. The countries of the West cannot forget that the nations of Central and Eastern Europe were the last to free themselves from the yoke of a dictatorial regime. They were the most recent countries in Europe to experience what the struggle for freedom means, a reality that is also the case for Ukraine and the people of Belarus. Without this common perception, the EU will remain a divided entity. That, in turn, will have consequences for how its foreign policy is crafted.

As far as Russia is concerned, EU policy must begin in the East, since the EU’s easternmost members are the key stakeholders. This is also true for policy on Ukraine, where the exclusive involvement of France and Germany in the negotiations and implementation of the Minsk agreements, although under the auspices of the Organization for Security and Cooperation in Europe, is often not well perceived by some Central and Eastern European members. The pattern can be reversed for issues related to security in the Mediterranean, on which the EU’s western and southernmost members may have more legitimate grounds to take the lead.

Finally, there is policy substance. The Russian regime is the first and most immediate threat to the security of Europe and indeed beyond in places such as Syria and Africa. NATO and now the EU have recognized it as such. No one can pretend that the Kremlin has not committed attacks on European soil, interfered in the democratic life of European countries and the United States, invaded part of the Donbas region, de facto annexed 20 percent of Georgian territory and all of Crimea (the first illegal annexation in Europe since Hitler’s Germany’s took the Sudetenland), and committed war crimes in Syria.

The Putin regime is not a normal regime. Attempts at conciliation and reengagement with Moscow have not only failed but encouraged the regime to go further. In fact, Russia has won in a sense: When nations fail to counter its aggression, Moscow sets the agenda. Until now, whether in Georgia, Syria, or Ukraine, Putin has always taken the initiative without encountering decisive responses from the United States and Europe beyond the still too-limited sanctions for his actions against Kyiv. This should not continue in Belarus or elsewhere. And we should not consider Russian gains faits accomplis.

In the face of this threat, it is difficult to slice up the issues like salami and decide which to chew on. With the possible exception of arms control, engaging with or including Russia weakens the West and gives Putin propaganda material.

It is also impossible, without driving a wedge into the alliance and depriving the EU of the means of retaliation, to define a common response to Russia without the United States. Any transatlantic divergence would be exploited by the adversary. Instead, what Europe must do is participate as a full partner in discussions with the White House. So far, the EU’s own divisions have stymied this maturation.

In this respect, the last European Council session was a wake-up call. It is urgent to put Europe in battle order—to strategically and intellectually arrange its forces. Going it alone on foreign policy would exacerbate the EU’s divisions, leading to a dead end.

Nicolas Tenzer is a guest professor at Sciences-Po in Paris, managing editor of Desk Russie, and the author of three official reports to the French government and twenty-two books and numerous essays on foreign and security policy. He writes on strategy at Tenzer Strategics. Follow him on Twitter @NTenzer.

Europe has changed. It has started—though only started—transforming into a global geopolitical player. The urgent task before Europe is to finish that transition.

Europe has imposed economic sanctions and restrictions on Belarusian planes, while US President Joe Biden has indicated that he will follow suit. What made Europe act with unusual swiftness and boldness?

After Czech officials exposed Russia’s involvement in the 2014 explosions at the Vrbětice arms depot, diplomatic tensions have spiked. A Czech diplomat previews what’s coming next.

Image: French President Emmanuel Macron and German Chancellor Angela Merkel look on as they give a news statement in Berlin, Germany, on June 18, 2021. Photo by Axel Schmidt/Pool via Reuters.